Game Changer Wrestling’s time in the Lone Star State isn’t quite done. One night following So High, GCW So Alive will take place, this time from the city of Dallas. There is plenty to be seen on this show, including the return of All Elite Wrestling’s own “La Mera Mera.” This doesn’t even begin to touch on the other items on the card. Even though this may be GCW’s last show in the state – for the time being, at least – the promotion is aiming to go with a bang. Here is what to expect this Saturday, whether you’re attending the show or watching on FITE. 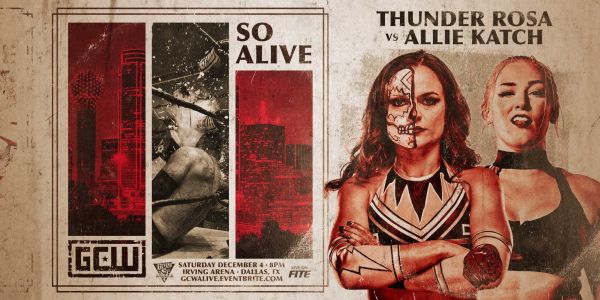 The Return of La Mera Mera

At GCW So Alive, Thunder Rosa makes her long-awaited return to Game Changer Wrestling. She debuted for the company at this past October’s Fight Club event, where she was the surprise participant in the Scramble Match. She didn’t win the match in question; the victory was earned by Jimmy Lloyd. Nonetheless, “La Mera Mera” had the support of the crowd each step of the way. Anyone that’s familiar with Rosa’s work and accomplishments can attest to her formidability as a wrestler. She’s held gold in promotions such as Tokyo Joshi Pro-Wrestling, the National Wrestling Alliance, and most recently, Warrior Wrestling. At So Alive, Rosa returns to take on a hungry, dangerous competitor.

Allie Katch is coming into this match off a major victory last month. At GCW Evil Deeds, she picked up a win over Chelsea Green, with who she has been feuding for the past few months. Katch and EFFY’s altercations with Green and her real-life fiance, Matt Cardona, have been well-documented in the company. Now, she intends to put GCW’s “Deathmatch Queen” behind her as she looks ahead toward Rosa. The two locked horns multiple times in the past, though this will be their first singles encounter since April 2017. They squared off at Anarchy Championship Wrestling’s Peace, Love & Anarchy event that year, where Rosa bested the young Texan Allie Kat. Can the home state competitor make good with a victory over the All Elite Wrestling star? 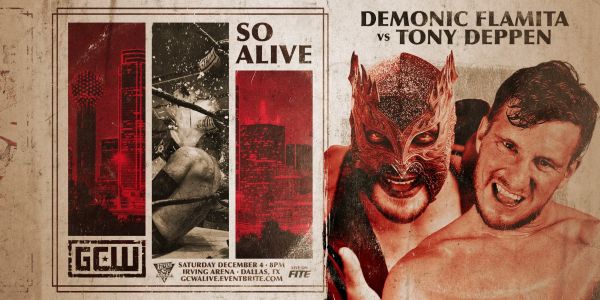 This match between Demonic Flamita and Tony Deppen is one that can be traced back the various altercations between MexiSquad and VLNCE UNLTD in Ring of Honor. Recent fans of ROH programming will be fully aware of the wars that the company’s different factions engaged in. Among the factions in question were Two of the warring factions were MexiSquad (Flamita, Bandido, and Rey Horus) and VLNCE UNLTD (Deppen, Homicide, Brody King, and Chris Dickinson). Originally, Deppen was set to take on Bandido at this event, until he was pulled as of November 26. At GCW So Alive, Flamita and Deppen lock up for the very first time. Simply put, this is a highly anticipated encounter.

Though Flamita and Deppen differ in many respects, where they are similar is their in-ring acumen. It would be fair to call these two competitors among the most impactful in the game today, despite their varying in-ring styles. While Flamita wrestles a high-flying style, for the most part, Deppen is more strike-based and technical. One can argue that Deppen has the edge heading into So Alive based on previous experience, too; while he’s been involved in countless GCW events, Flamita bears no such experience, meaning that he’ll be in that much more of an uphill battle at So High. It can be argued that this match has the opportunity to go either way. Regardless of the outcome, this will be a match to keep an eye on. 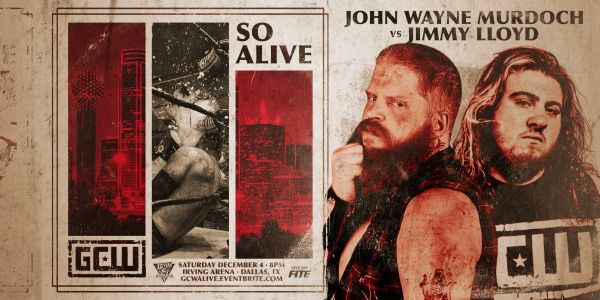 John Wayne Murdoch made his Game Changer Wrestling return in a major way. Last month’s Nick Gage Invitational 6 saw deathmatch veteran Alex Colon go all the way, defeating Masashi Takeda in the tournament finals and regaining the GCW Ultraviolent Championship. What was meant to be a moment of celebration, however, became volatile in an instant. To the surprise of the Chicago crowd, as well as those watching from home, John Wayne Murdoch hit the ring, attacking Colon. After laying out the NGI6 winner, Murdoch held the Ultraviolent title above his head, making his intentions known. He was back and he wasn’t about to take a backseat again.

Later in the month, Murdoch explained his actions. He took umbrage with being considered a “bridesmaid” but never a “bride.” Murdoch wanted his respect and there are perhaps few ways more efficient to do so than besting Colon and seizing the GCW Ultraviolent Championship. “The Duke of Hardcore” is a deathmatch veteran in his own right, boasting such records as 6 IWA World Championship reigns, not to mention multiple deathmatch tournament victories over the years. At So Alive, Murdoch returns to a GCW ring as he takes on “The Different Boy,” Jimmy Lloyd. Murdoch has gold in his sights and Lloyd will be a tall take leading to his inevitable encounter with Colon.

Stay tuned to the Last Word on Pro Wrestling for more on this and other stories from around the world of wrestling, as they develop. You can always count on LWOPW to be on top of the major news in the wrestling world, as well as to provide you with analysis, previews, videos, interviews, and editorials on the wrestling world. GCW So Alive is set to air Saturday at 8 PM CST on FITE. Tickets are also available via Eventbrite.