On Friday, August 19th, 2022, the New York Jets hosted the Atlanta Falcons in the first of two joint practices ahead of their Week 2 preseason matchup. With countless Jets and a handful of Falcons fans in attendance, New York put on a show. On that note, let’s jump into the latest notes and analysis from the New York Jets 2022 training camp amongst the fans day four…

To the Jets, this was not any other practice. Numerous players joined, even beating Ahmad Gardner and Breece Hall to warming up well ahead of the first practice period. Players were locked in, accepting the hot weather conditions, and were hungry to hit.

For most of the day, Jets fans watched the offense go through 11-on-11 periods against the Falcons defense… and dominate. Quarterback Joe Flacco looked fantastic, not only throwing his signature tight spirals but even flashing some mobility when escaping the pocket. The offensive line was not perfect but seemed light years ahead of Atlanta. Once Duane Brown’s ramp-up is complete, the unit will only get better.

Not to mention, Breece Hall added another highlight to his rookie Jets training camp mixtape, taking it 75-yards to the house. Hall, who has been a standout all camp long, showed how dangerous the combination of his speed, cutting ability, and size can be. Overall, it was a great day for Hall, as well as Michael Carter and Zonovan Knight.

The biggest takeaway from today was the performance of the Jets wide receiver corps. Corey Davis and Joe Flacco are finding their rhythm together. Garrett Wilson, despite losing matchups early to Falcons corner A.J. Terrell, went on to have a fantastic outing putting his footwork and body control on full display. Even Denzel Mims got in on the action with a leaping grab late in practice. Yet it was Elijah Moore who not only had the catch of the day (as seen below), but found ways to get open when Flacco needed him most. Flacco even went on to compare Moore to five-time Pro Bowl receiver Steve Smith Sr.

Similarly, it is time to recognize Irvin Charles. The undrafted free agent out of Indiana (PA) had his best practice of camp so far on Friday. Known for his size at 6’4” and 219-pounds, it came as no surprise when he successfully lowered the shoulder on a corner in fighting for extra yards. What was a surprise was his ability to pick up yards after the catch with his athleticism. Having had weeks of practice where his strong hands stood out, he is the latest Jets receiver to emerge in the fight for a roster spot.

At the same time, the Jets offense was working the Falcons defense, things were getting heated on the second field. New York’s defense was hungry today, with multiple turnovers forced, sacks had… and scuffles involved.

The first two instances only had a few players involved, however, things ultimately boiled over. Within the same practice period, there were three scuffles, the last having seen punches thrown. Jets defensive end Bradlee Anae was seen clear as daylight swinging at a Falcons player. Following this, both team’s units separated had a huddle, and came back together to continue minutes later.

Even so, minutes after returning there was one last near-fight incident. A few plays in, Falcons offensive lineman Rick Leonard was shoving at Jets defensive tackle Nathan Shepherd, as Shepherd opted not to engage and wag his finger no. In the end, it took a few teammates to prevent another scuffle within one practice period.

Luckily, that was the end of the fighting. Nevertheless, it certainly adds another storyline for not only Saturday’s joint practice, but the pre-season game Monday night.

On the day, Falcons quarterbacks Marcus Mariota and Desmond Ridder had their highs and lows. Mariota, who looked solid during team drills, couldn’t get in rhythm against the Jets starting defense in the two-minute situational period. After completing his first pass, he was forced to throw two passes away, and couldn’t connect on another two. Ridder saw more luck, though all coming on underneath passes.

In other words, the Jets defense also won their matchup today. Cornerback Ahmad Gardner had his first interception of camp, picking off Ridder. Ashtyn Davis also came down with one. Linebacker Kwon Alexander also forced a fumble, to which DJ Reed scooped and returned. Along the defensive line, the Falcons quarterbacks had very little time to deliver today. New York used a heavy rotation, and it paid dividends. From Carl Lawson to Jermaine Johnson, and even Bradlee Anae too, the Jets defense was able to win at the line of scrimmage.

As previously mentioned, veteran Joe Flacco has done a great job stepping into the first-team quarterback role. With starter Zach Wilson out following right knee surgery, the offense has not missed a beat with the 37-year-old under center. It is hard to ignore the connection he is already building with the receiving corps.

But what is interesting is what may happen behind Wilson and Flacco in the depth chart. Now, Mike White certainly has the upper hand when it comes to experience. After all, he is a Jets folk hero for beating the Cinncinati Bengals in 2021. Nonetheless, Chris Streveler-fever has taken over Florham Park in the last week.

After pulling off a late comeback against the Philadelphia Eagles in the Jets first pre-season game, Streveler has been getting legitimate practice reps with Wilson out. In those, he has put his mobility, accuracy, and confidence on full display. He is only working with the third team for now, though the question is beginning to surface if he can beat out Mike White. At the very least, the former CFL quarterback has already become an underdog fan-favorite.

Final Takeaways from Day 4 Amongst the Fans

On Saturday, August 20th, the Jets will host the second of the joint practices with the Falcons ahead of the Monday Night Football pre-season matchup on ESPN. Look out for the Streveler-Charles connection, in addition to whether the secondary can build off Friday’s turnover-getting momentum. 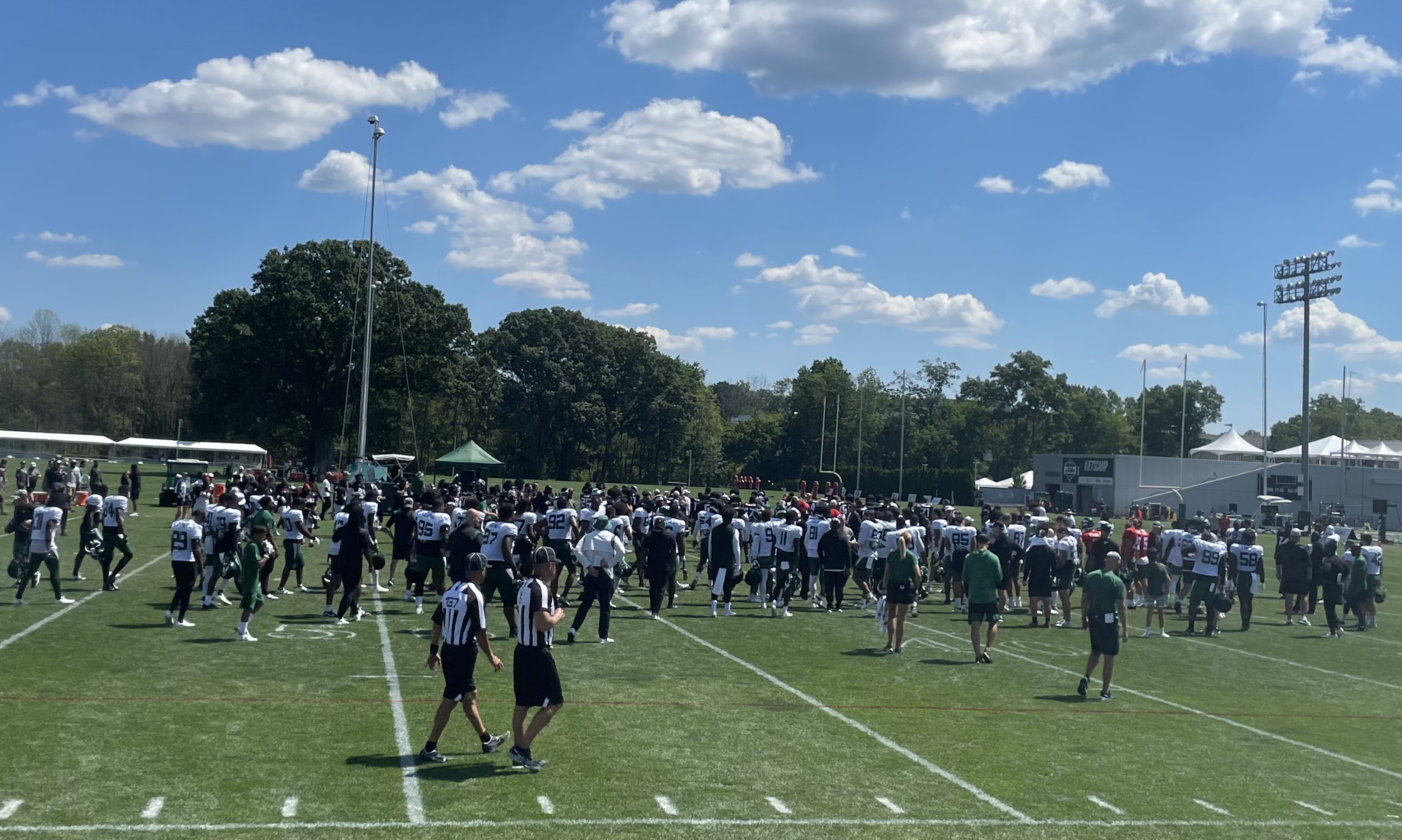