Formula E kicks off Season 9 with the debut of the Gen3 car in Mexico City this weekend marking the beginning of a new era.

For the first time, Mexico City will host the first E-Prix of a Formula E season. The race is going to take place at the Autodromo Hermanos Rodriguez, where Formula E had raced since Season 2, apart from Season 7 where the E-Prix took place in Puebla. The expectations for the new season are high, considering the amazing Season 8 finish. 2022 saw a four-way fight for the title come down to the last weekend with the triumph of Stoffel Vandoorne.

The Gen3 is here, but before we say goodbye, let’s remind ourselves of some of the incredible moments we witnessed during the Gen2 era ⚡

The Mexican Autodromo features 16 turns over a 2.606km circuit. The track has two long straights and challenging direction changes. But the most fascinating element is that the track passes right through the Foro Sol stadium, which hosts thousands of fans between T10 and T14. Attack mode will be available at Turn 3, presenting early overtaking opportunities in Turns 4, 5, and 6. 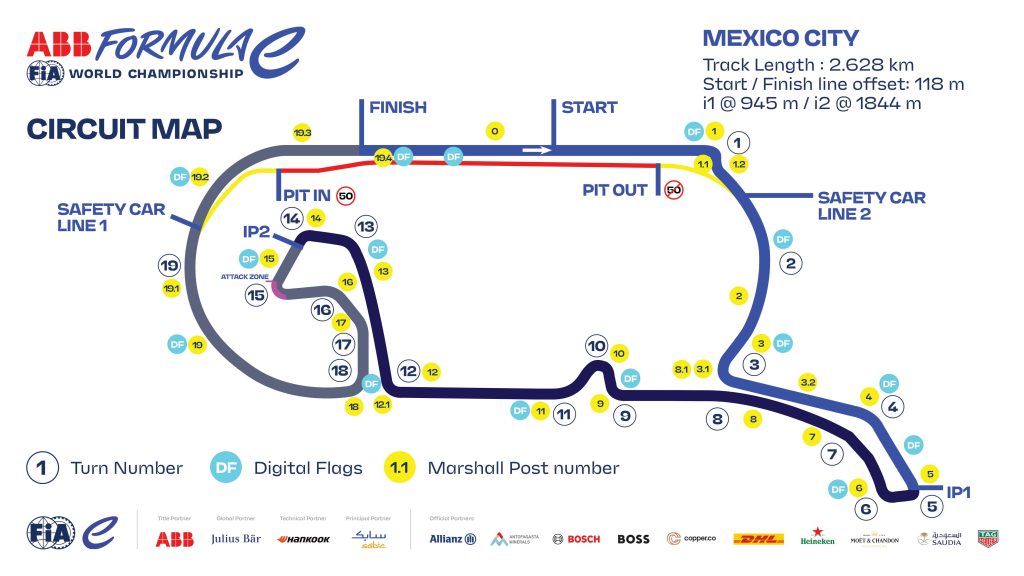 Many aspects of the first E-Prix are still unknown, being the season’s first race and, more importantly, the debut of Gen3. These new cars are faster, lighter, and very different from Gen2. The drastic changes and learning curve will likely cause problems for the teams during the season opener. Battery failures, engine issues, or technical component damage are some of the issues that we’ll probably see during the Mexico City E-Prix weekend. The most worrying problem at the moment seems to be brake malfunctions. During the pre-seasonal tests in Valencia Sebastian Buemi crashed after a brake failure. The FIA has already planned a new brake failsafe system, but it won’t be ready for the first race of the season.

The Season 9 grid will be composed of eleven teams and twenty-two drivers, with the debut of McLaren and Maserati. The Monaco-based team has demonstrated its competitiveness during the Spanish tests, setting the fastest time, and could be a real competitor for the title from the start. Edoardo Mortara and Maximilian Gunther could be early favorites in the blue car at the Mexico City E-Prix.

The GREATEST finish in Formula E?

Mortara, who finished the last two seasons in the top three and fought for the title last year, will be hoping to finally be crowned champion this year. While Gunther will be aiming to prove to doubters that he deserves this new chance in Formula E after a forgettable Season 8. Even if Maserati seems to be a realistic contender for the win from the new entries, Pascal Wehrlein has a good chance to start the season in the right way. In fact, it was Wehrlein with Porsche who won the Mexican E-Prix in 2022, and with the duo together again for Season 9 they are favorites for the top step on Saturday.

How to Watch the Mexican E-Prix (EDT)