As the sun sets on another season of NASCAR, President Steve Phelps is correct in his optimism for the future of the league.

Four years ago, NASCAR President, Steve Phelps, addressed the media at Homestead-Miami Speedway. He discussed in detail how NASCAR’s best days were ahead. “I know that seemed kind of foolish,” he said. “Maybe some of you were snickering, like, I’m not sure that’s going to happen.”

I was one of those pessimists. At that time, it was for good reason.

NASCAR was at its nadir. Ratings and attendance had declined for the 13th straight year, and then-Chairman and CEO, Brian France, resigned in disgrace, after his arrest for driving while intoxicated. The on-track product was serviceable at best, but unwatchable at the downforce-centric tracks.

However, over the next four years, NASCAR’s decisions under Phelps turned me from a pessimist to a cautious optimist. Now, as the curtain call draws near and NASCAR prepares for its 75th anniversary, I share Phelps’ optimism for the future of the league.

Revival of the Downforce-centric Tracks 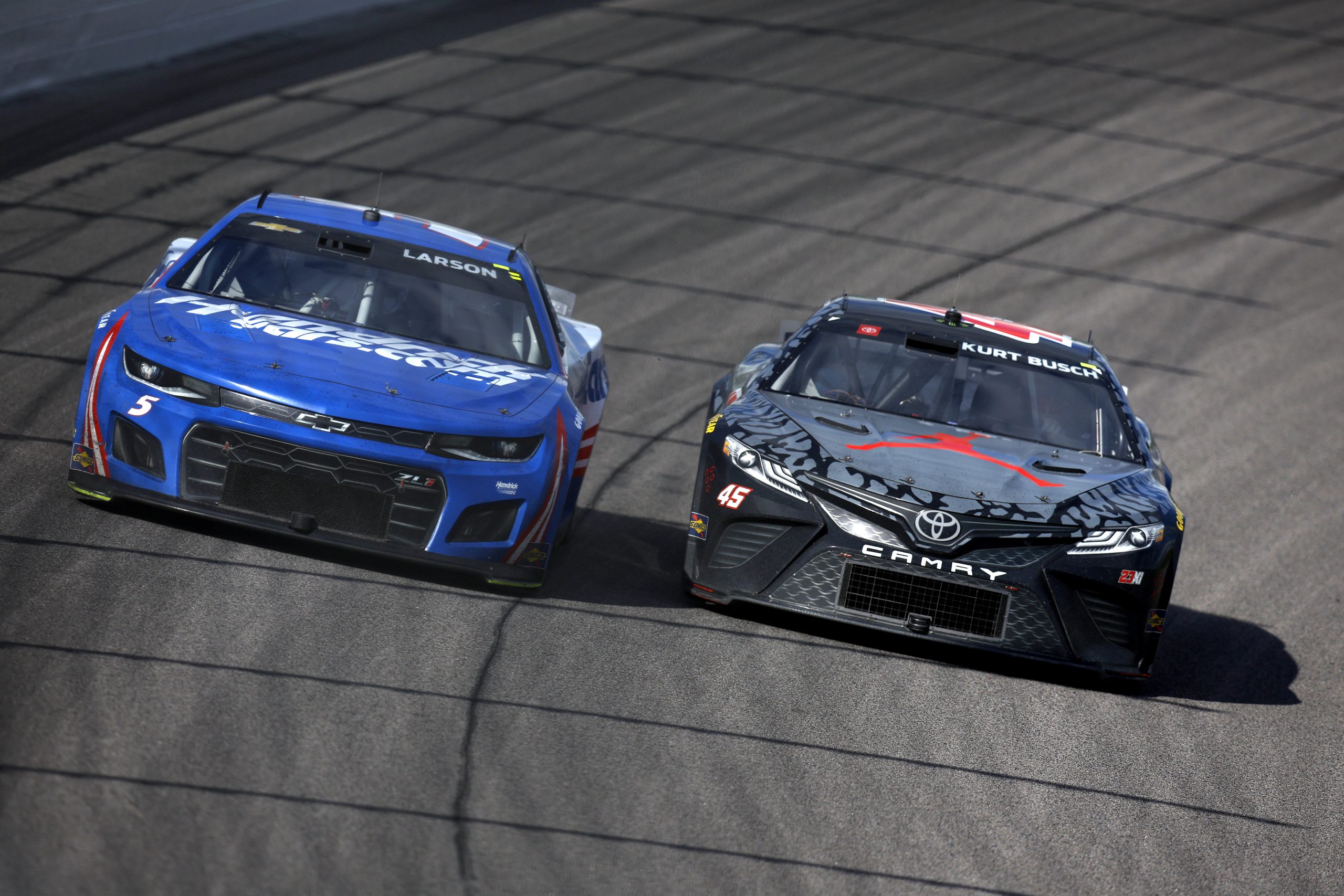 On May 24, 2020, Brad Keselowski won the Coca-Cola 600. Following the race, I noted to a friend that was the worst race I’d ever watched. And I was there when Martin Truex Jr. led all but eight laps at Charlotte Motor Speedway. Yet watching that race, my friends and I were miserable. Bored out of our minds and annoyed that we wasted our time watching that awful race.

No longer is the racing on 1.5-mile tracks a game of follow-the-leader, where overtaking is a Herculean task. No longer is it a matter of who can hold down the gas pedal the longest. Now, tire management and line choice in the turns play a greater role at intermediate tracks.

To quote France, it truly is “quintessential NASCAR.” Instead of a poorly handled on-track wreck, it’s now in reference to the revival of the racing on 1.5-mile tracks. Yes, it could be better. Especially with more horsepower and off-throttle time, but right now, the downforce-centric tracks showcase NASCAR at its best.

Greater Parity Than Ever 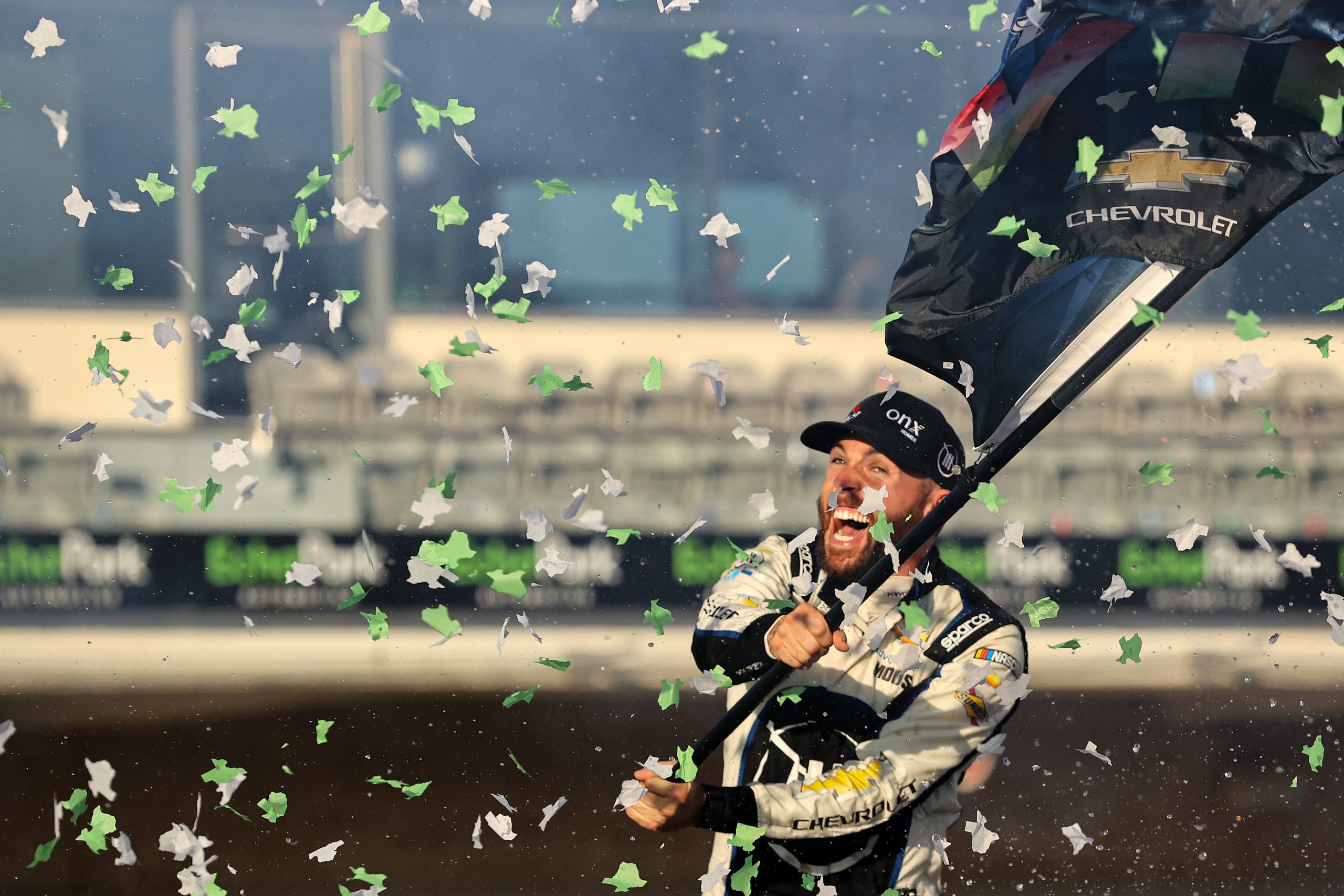 Prior to the season, Jeff Gluck, NASCAR beat writer for The Athletic, made the following prediction.

After Suarez almost won last week and Chastain is leading today, seems like it’s already time to own this freezing cold take from my season predictions. 🥶🥶🥶 @JustinMarksDG pic.twitter.com/DRKbOzoIAG

Come Sunday, Chastain will race three other drivers for the Bill France Cup. Moreover, in the midst of a breakout season, Christopher Bell joins Chastain in the Championship 4, after his win at Martinsville Speedway.

Both are among 19 different drivers to win a Cup Series race this season. Which, barring a new winner Sunday, ties the modern-era NASCAR record for the most winners in a season (set in 2001). Furthermore, five drivers scored their first career victory (the most since 2011), five won their second, four won their third and two won their fourth. And of the 35 races so far 24 have been won by drivers under the age of 30 (at the time).

“The raceability of the car was such that it resulted in 19 different winners, so more than half the field won a race in NASCAR this year,” Phelps said. “Five first-time winners. More passes throughout the field in a single season.”

The level of parity in 2022 is unlike any past season. A definitive championship favorite didn’t emerge at any point in the playoffs. There is a strong case for and against Bell, Chastain, Chase Elliott, or Joey Logano winning the championship Sunday at Phoenix.

It’s that close! I don’t know how sustainable this level of parity is. Come next season, it is doubtful you’ll see this level of chaos, as teams gain a better understanding of the Next Gen car. For now, however, enjoy the chaos while it lasts. 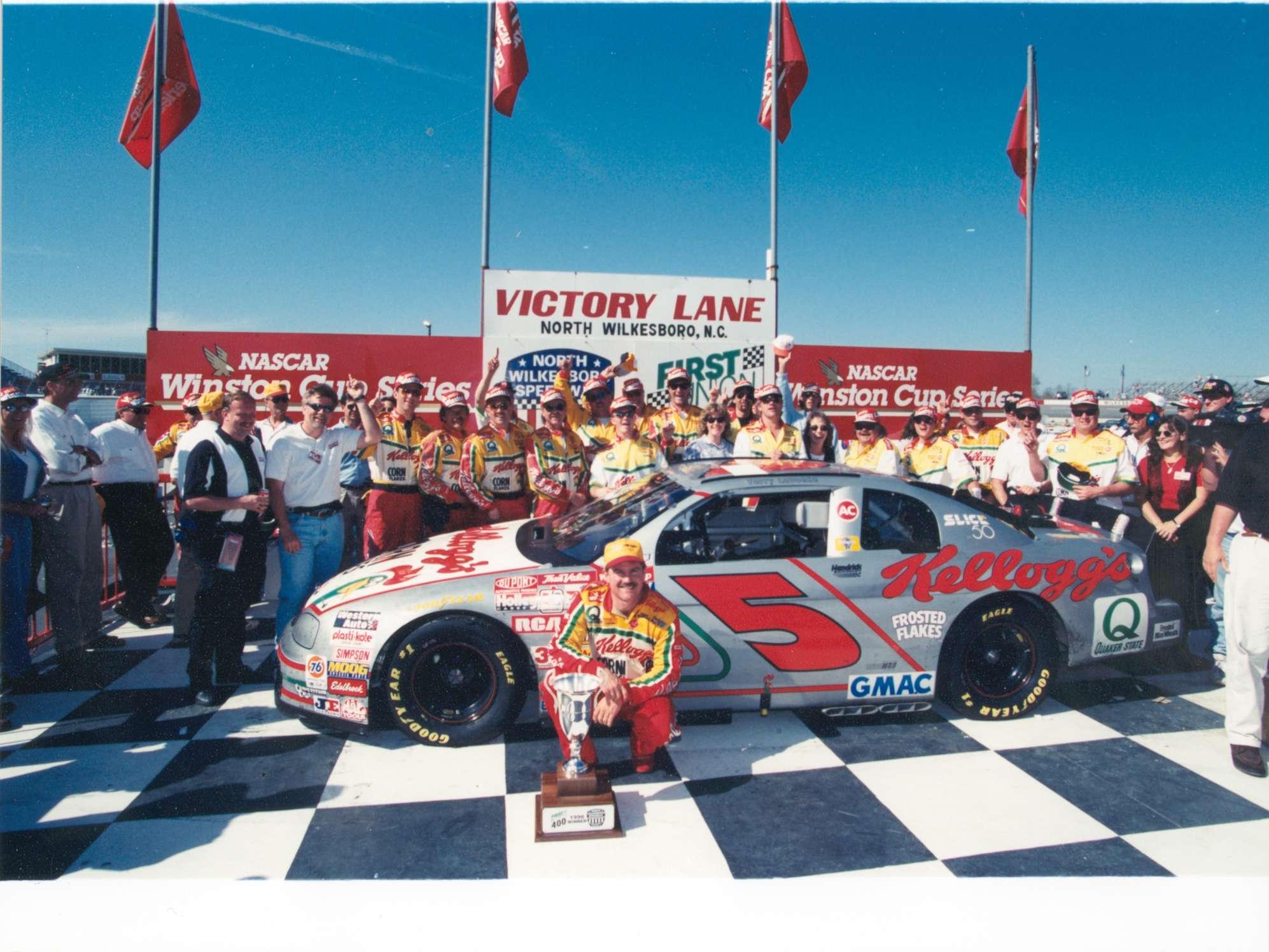 For those relatively new to NASCAR, this level of movement and new tracks was once a pipe dream. For the longest time, NASCAR’s schedule stagnated like molasses. Year after year, few, if any, changes came to the schedule. The 2019 Cup Series schedule was a carbon copy of the 2018 schedule, with no shift of dates.

Just five years ago, the only road courses on the Cup Series schedule were Sonoma and Watkins Glen. Now, there are six. The Cup Series went over 50 years without racing on dirt. Now it does at Bristol. there’s one. A pioneer track was left for dead to head to new markets. Now, North Wilkesboro takes a date from Texas Motor Speedway.

There Are Problems, However 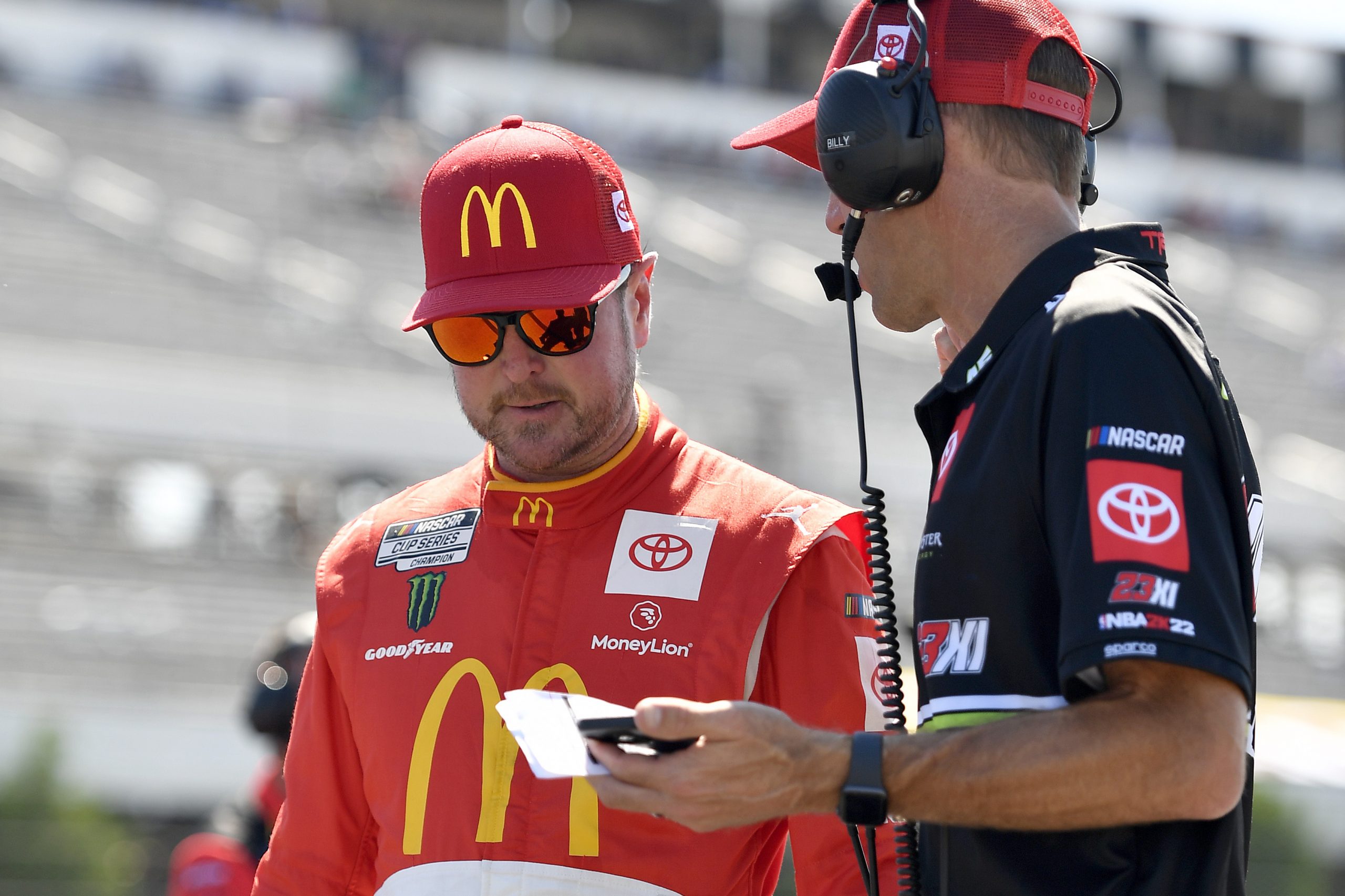 A qualifying wreck at Pocono Raceway sidelined Kurt Busch for the rest of the 2022 season and Alex Bowman sat out a few races after his wreck at Texas. Both incidents resulted in concussion-like symptoms. With all the years of testing and development that went into this car, the fact that this slipped through the cracks is unacceptable.

However, NASCAR COO Steve O’Donnell told the media Friday, the league knows what the problem is.

“What we’re learning is those smaller hits, which we’ve never seen before in terms of a car that we’ve raced, are the ones we really need to concentrate on. That’s why you’re seeing the tweaks being made to the clip, for those smaller impacts, even a bump on a restart, those types of things.”

Aside from safety, while the racing improved dramatically at intermediate tracks, road courses and short tracks have suffered. So 2023 might bring aero changes for the short track and road course packages. O’Donnell noted,

“We have a lot of dialogue going on with the drivers in terms of potentially looking at some power things. I think that’s a little more complicated. There are some things we’ve looked at even through Garage 56 (NASCAR’s Le Mans project) that we found from an aero standpoint that could be put in place as early as next year for both short tracks and road courses.”

“The good news is continuing to dial in on the intermediates which we believe we’re in a really good spot, but then really focus on the short tracks and road courses.”

Of course, taking the good with the bad, it comes out to a bright future for NASCAR. Much brighter than anything I could’ve imagined in 2018. The Next-Gen car has revived racing at intermediate tracks and brought parity not seen in a long time. Furthermore, a schedule once stuck in molasses is now more fluid than ever.

For now, let’s enjoy the finale on Sunday. Then take a much need break for the winter. Once, NASCAR stood at the edge of the abyss. Now, its best days really are ahead.

NASCAR: What the Championship 4 are saying ahead of Phoenix
NASCAR Truck Series: Four Takeways from Phoenix