Turns out you can run a NASCAR Cup Series race at Talladega without a big wreck.

As the field took the green flag with two laps to run in the YellaWood 500, Chase Elliott sat on the inside row in fifth. About which he wasn’t “super crazy.”

“Fortunately,” he said, “I got just clear enough off of two to slide up in front of Erik (Jones).”

He and Erik Jones connected and pushed their way past Denny Hamlin and Michael McDowell on the inside. They lost touch in Turn 4, but Jones pulled back to Elliott’s bumper as the field came through the tri-oval.

Elliott didn’t even drag his brakes, either.

“He was able to give me a really good shove,” he said. “I didn’t feel like I did anything special. I think just the timing of how he got connected, and the two guys on the bottom were also connected, so they weren’t aggressively side drafting us, trying to pull us apart.”

The starter displayed the white flag. Ryan Blaney led, but Elliott had the momentum. The crowd of 100,000+ sensed it and thunderous cheers erupted at Talladega Superspeedway.

And he did, but almost left too big of a gap. Which, in a restrictor plate race, makes the race leader a sitting duck.

“I knew it was probably going to be close,” he said. “Ryan was going to have such a good run, I didn’t really know how I was going to block it. Tried to waste as much time as I could and hope I got to the line first.” 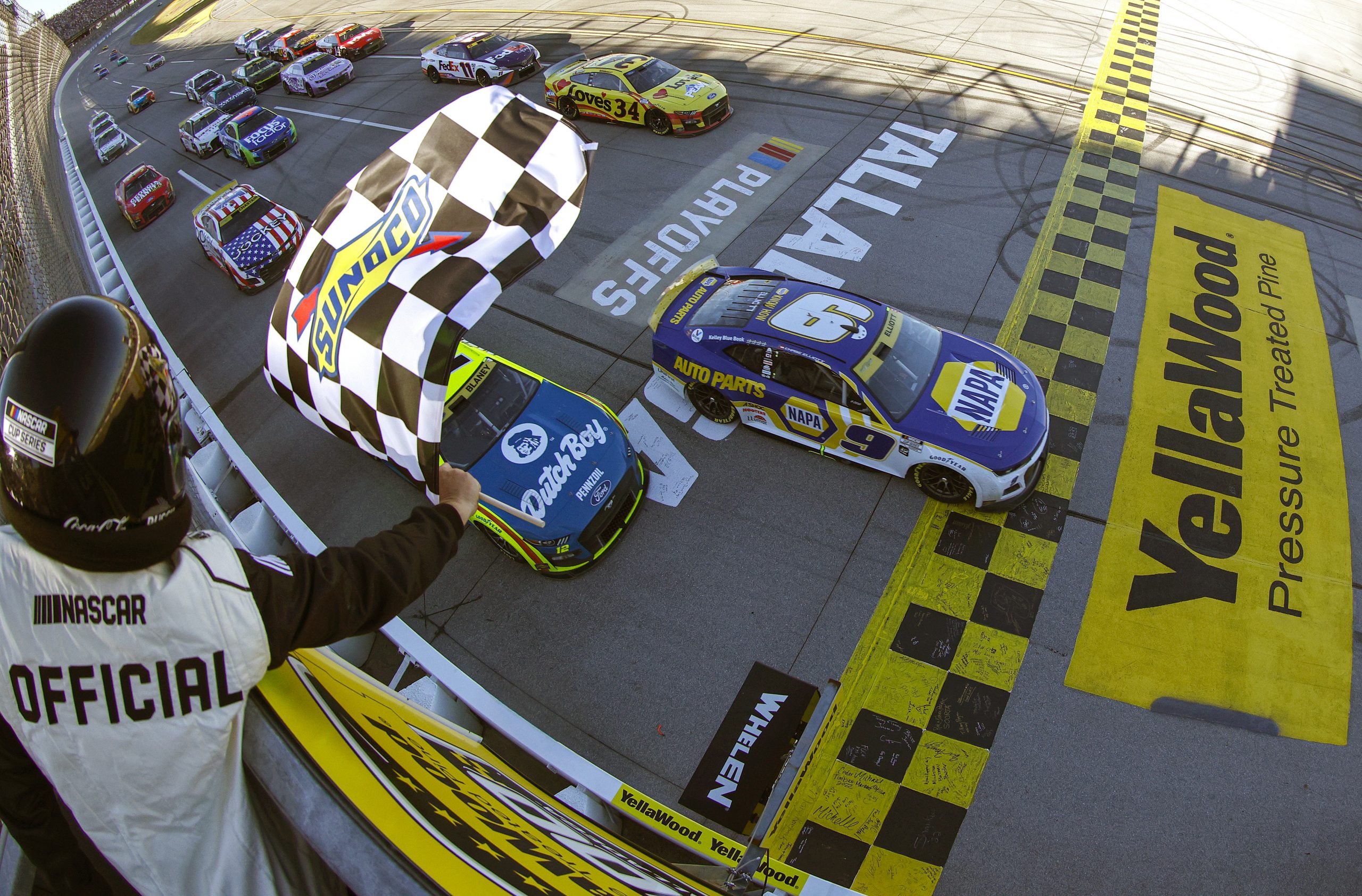 Blaney pulled high. Elliott blocked him and beat him to the line to win for the 18th time in his Cup Series career.

As he celebrated to the delight of the crowd, Blaney stood on pit road and thought if he could’ve thrown a block in Turn 4 on the final lap.

“The second lane was kind of the strongest, like, definitely the second half of the race,” he said. “I thought about it. But when you go to the middle and you don’t have a Ford or teammate behind you, your chances of getting split are just so high.

“As much as I trust Chase, I don’t trust him not to take me three-wide and leave me in the middle. I just chose to stay down in front of Michael and he was awesome at pushing me the last restart, giving me great shots. Just a little bit too late.

“Maybe I could have faked the top, gone to the bottom on the front stretch. I don’t know if I would have got there anyway.”

Overall, however, Blaney leaves Talladega in an excellent points situation. He sits second in points, 32 ahead of Austin Cindric in the cutoff spot. So barring a disastrous run at Charlotte Motor Speedway, he’s safely onto the Round of 8.