Formula E arrives in Seoul, South Korea for the conclusion to a thrilling Season 8 and the series landmark 100th E-Prix.

It has been perhaps the best season in Formula E history. Eight winners from the opening 14 races. 12 different drivers on the podium. A four-way battle for the Driver’s Championship and a Team’s title that is still up for grabs as the season wraps up with a doubleheader in Seoul. The year ends with a new location and a circuit that will run through an Olympic Stadium. A fitting end to the Gen2 era for Formula E.

Mercedes look poised to win back-to-back titles just as they exit the series for the incoming McLaren. Their driver Stoffel Vandoorne arrives as the clear favorite after the team won the Driver’s Championship with his teammate Nyck de Vries last season. But last season we saw two title contenders cruelly taken out of the fight in the opening seconds of the race. Nothing is a given in Formula E, except perhaps that it should be an entertaining close to Season 8. 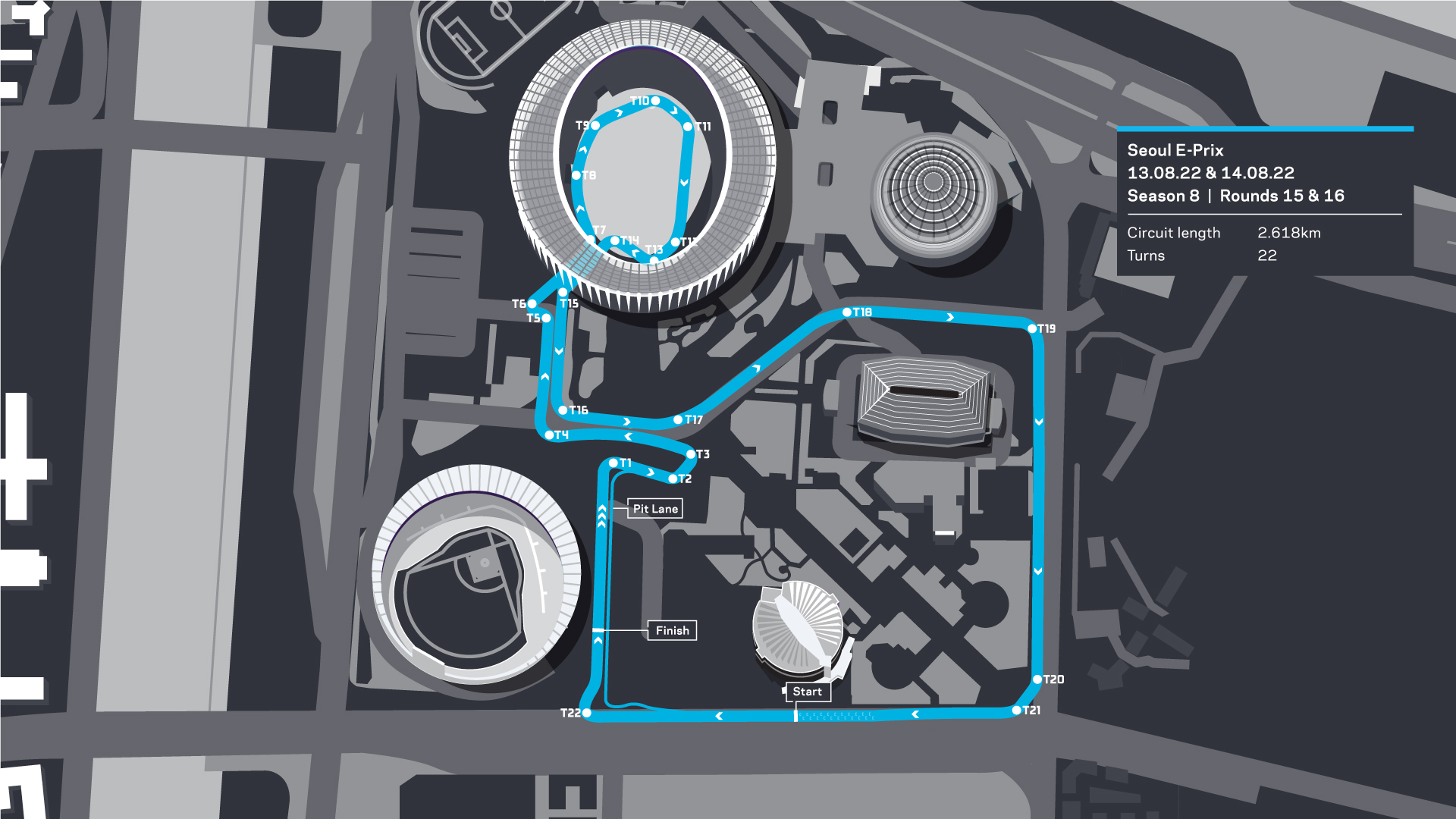 Plaudits to Formula E for continually bringing in new geographic regions and global cities into the calendar. And their unique track layouts and locations. From the debut in Jakarta to New York City to last month’s indoor-outdoor London E-Prix. Now comes what could be another iconic racing visual – the Seoul E-Prix. The circuit runs throughout the Seoul Olympic Park and into the Jamsil Olympic Stadium. After a series of technical corners and the loop through the stadium, the circuit features four long straights which should offer repeated overtaking opportunities. The Attack Zone will be at the peak of the stadium circle, meaning lots of position changes in front of the crowd.

Zero points from the London Doubleheader for both Mortara and Verge has most likely ended their title challenges. While Mitch Evans and Mortara remain within reach, and Formula E is known for dramatic final weekends, they need near-perfect results while hoping Vandoorne fails to score.

A combination of Mercedes’ stability and inconsistency from their rivals saw the reigning Team Champions leap back into first place. While second place is still up for grabs it would take a big dip in form to see either ROKiT Venturi or DS Techeetah take the title.

Four title contenders, but only ONE of them can become world champion 🏆

Who'll be crowned the Season 8 champion at the 2022 Hana Bank #SeoulEPrix? pic.twitter.com/bKH2GIeGvO

The season’s final weekend offers up a brand new circuit with potential weather complications. The typical level of anything could happen in Formula E. There’s very little to truly compare the circuit to until we see how Saturday’s E-Prix unfolds so the favorites are a mix of title contenders and in-form drivers.

How to Watch the Seoul E-Prix (EDT):

To watch Formula E outside of the US, head to Formula E’s Ways to Watch page and select your country.

READ NEXT: Formula E – A Day At The London E-Prix