Formula E is building up to its exciting season finale in Seoul with Stoffel Vandoorne in pole position for his first title and Mercedes’ second.

This year has seen huge growth among fans for the series and an exciting new generation coming next year for Season 9. But what is it like to attend a Formula E race in person?

One of the first things to note is that with the E-Prix locations being city centers they are far more accessible than most Motorsport events. The cost of tickets is usually a lot less than the big established series like F1. So if you have never attended a race before and are thinking about it, the E-Prix is a great place to start!

While this article explores my experiences attending the London E-Prix at the Excel Centre, other events follow the same track action structure and offer similar activities in the E-Village. Hopefully, you will get a good feel for what it’s like to attend a Formula E race.

The sessions are relatively short with practice at 30 minutes and the other two at around 45-60 minutes, depending on what happens. This means there is plenty of time in between for other activities and get drinks and food, but gives enough track action.

The practice sessions are surprisingly interesting. With shorter tracks and only 30 minutes, it means you get to see a lot of cars throughout the session. Being the first session in the morning means a lot of people won’t be there yet, so while it’s the start of the day, it’s also less crowded.

Qualifying is where the real action starts with the two qualifying groups followed by the knockout duels. Having watched them on TV, the duels are interesting to watch but not as good in person. I found myself watching it on the screens most of the time as it’s the only way to know who’s in the lead. This season Formula E has delivered great side-by-side graphics to show how each duel is developing in real-time.

As you’d expect, the race itself is by far the most satisfying to watch.

The organizers are very good at laying out the grandstands at the London E-Prix. They were all broadly located near the big braking zones. Hopefully, allowing spectators to see the action.  This means you’re not sitting somewhere you only see the cars going past and missing the overtaking zones. By design, there is usually lots of action happening in a Formula E race! There is also a large screen nearby with live commentary. If the cars are not near you then you won’t be missing out on what’s happening.

For London, the only negative was the podium celebrations. It was held inside the center and the only way to see it was to cram into the grandstand opposite the podium. This meant it was very busy and if you moved further over for more room then you’d struggle to see the podium properly.

Other events in more open locations won’t have this issue or they allow people onto the track to watch the celebration. 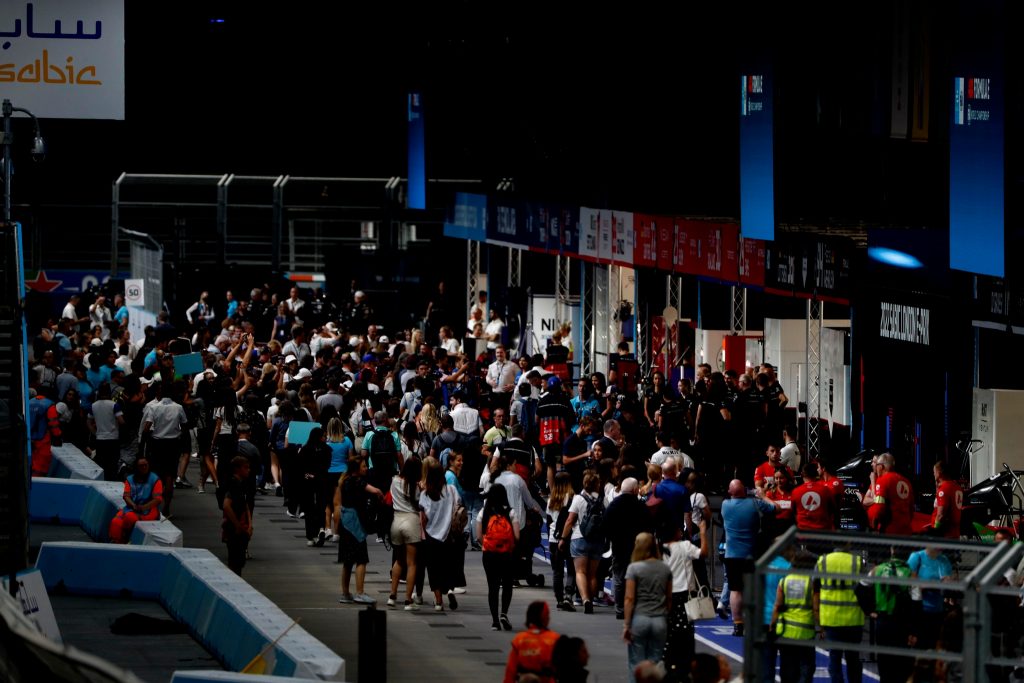 The E-Village is what they call their ‘fan zone’ area. All the E-Prix’s have it and it’s generally a central location within the event. It will often be where the food vendors are along with the bar and all the activities.

If you’re interested in trying the Formula E simulator then go for that straight away. The queue gets very long, very quickly. You get to sit in a proper simulator and have 3 or 4 laps to try and set your quickest. The track is the one you’re visiting so you can feel what the drivers will feel.

Formula E is very big on driving change in the industry and making it more inclusive. As a result, there was a big area dedicated to the ‘FIA: Girls on Track’ initiative. The aim is to increase female participation in Motorsport. The area included go-karting pitstop practice, information on the roles available, and other practical games about engineering.

Within here there is also an indoor electric go-kart track, which I also queued up for an hour for. However, be prepared, because it was only for kids to try.

All the sponsors have their own stands as you’d expect. Saudi Arabia Airlines had an area with its own simulator in it and was giving out personalized luggage tags. Allianz was showing off the types of insurance products they have and offered the chance to win an electric car.

Usually, a lot of the countries hosting races the following year will have stands promoting their country as a tourist location. If you’re a diehard Motorsport fan, check for special package offers.

Finally, at the center of the E-Village is a large stage where the live music performers play. There were different performances each day including DJ Jax Jones who also played the intro section before each race to excite the crowd.

The pre-race party got the drivers pumped!

There was a mixture of performers throughout the day. The E-Village had beanbag chairs set up around the area for fans to relax, enjoy refreshments, and watch the performances between qualifying and the race.

There are a few other things going on at an E-Prix that don’t necessarily fit into the above.

As is standard for any large sporting event there is the VIP and corporate hospitality area. If you were there and would like to share your experience then send us a message.

The E-Village has a ‘fast laps’ experience that they do round the track. These are for the VIPs, celebrities, and those who paid for the privilege. Professional drivers will take you around the track in supped up electric Jaguars and Porsches. The whole intention being to scare the living daylights out of you.

Each day there are limited tickets available for the pitlane autograph session. Now these are free, but you have to be very quick to get the tickets as they sell-out fast. You get to walk down the pit lane after qualifying, offering the chance to see everyone working on the cars and meet the drivers.

This is a part of the drivers’ media weekend commitments, so unless they have a good reason all the drivers will be out for part of the session. The drivers are there to sign autographs, take pictures and chat with fans. The only driver I didn’t see was Vandoorne so I’m guessing he had something that excused him from the session. Definitely recommend getting tickets and doing this if you can.

This was the final London E-Prix of the Gen2 era so they were showing off the Gen3 car for next year. A separate area had been set up to promote the car. Again this is ticketed but they are free. Once inside the area was made up of large screens showing headline details about the Gen3 cars. There were flashing lights and loud sounds. A great showpiece with the Gen3 car featured in the center.

I will admit, I was not a fan of the Gen3 car from the original photos that were released. But in person, it’s a definite improvement. It is not quite as triangular as it first appeared and does look quite impressive. Once the team liveries are on the car it will only improve the look.

Overall, the event was great, I really enjoyed attending it. We had good races on both days and the cars look even better in person.

The London track has an inside-outside layout which is pretty unique and internally the atmosphere was amazing. Formula E even made more of a boxing-style atmosphere with music and lights performances on the grid. Not all of the tracks will be able to do this. But I would expect Formula E to replicate this when they can.

Based on its age as a series and global recognition, Formula E still has a way to catch up with F1 in terms of overall experience and prestige. However, if you want an enjoyable day out watching motorsport, that isn’t too expensive, is easily accessible, with plenty to see and do, and actually has great racing, then I definitely advise going to see an E-Prix.

Read Next: F1 Docuseries: Keanu Reeves to host a new project for Disney+