Big 10 country offers up plenty of food associated with offensive linemen. Cheese in all forms and flavors. Brats and Buckeyes (not the team). Cincinnati Chilli and deep-dish pizza. All of these food delicacies are (presumably) consumed not just in Big 10 country but in the SEC and the Big 12. Make no mistake about it, the best Big 10 offensive linemen do much more than just put away glutenous food.  These five players can pave lines wider than the North Central Plains. And while the collective unit is great, the top two players on this list likely will be the first two offensive linemen taken in the 2023 NFL draft.

Ohio State is the only school on this list that boasts two selections of the best Big 10 offensive linemen returning for the 2022 season. Dawand Jones had a fair share of game action in his first two years on campus in Columbus. However, the 2021 season marked his first as a full-time starter at offensive tackle. He certainly made an impression, finishing the season with a projected NFL draft grade of a fourth or fifth-round selection. Jones opted to return to the Buckeyes in hopes of continuing his development and his NFL stock. Head coach Ryan Day knows that Jones needs to develop more consistency in his pass protection. But if he does, it will only elevate the Buckeyes’ overall offensive attack.

Michigan’s offensive line won the 2021 Joe Moore Award for college football’s best offensive line. The Wolverines also made their first appearance in the college football playoff. Offensive tackle Ryan Hayes returns for his fourth season as a starter. Listed at 6’7”, 300 lbs, Hayes is a name that is appearing on plenty of 2023 NFL draft boards. Hayes has the opportunity to build on his second-team All-Big 10 selection from last season. A successful season means the potential to hear his name called on the first day of the draft.

The center for this best Big 10 offensive linemen unit is the most experienced player of the five. Jon Michael Schmitz has played in 44 career games, 23 of those games were starts at center. Schmitz will be at the heart of an offense that played essentially the entire year without one of the best running backs in the Big 10. Schmitz’s leadership will be tested in bringing together a lot of new starters for the Gophers along the offensive line. He will be one of the early season favorites for the Rimington Award in the 2022 season. 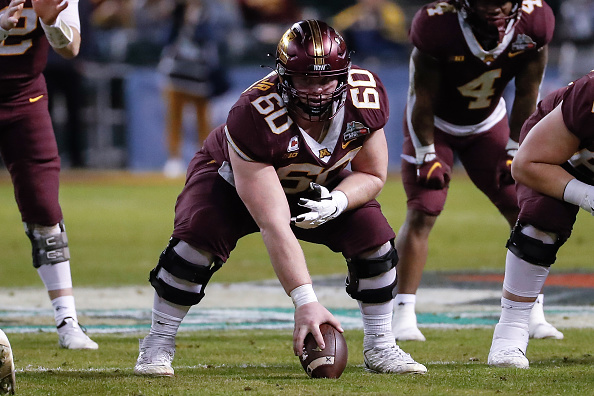 A two-time second-team All-Big Ten honoree, Peter Skoronski has demanded the attention of the Northwestern coaches and fans since arriving on campus. According to Northwestern’s bio page, Skoronski had a recruit “rating of 0.9468 by 247Sports, [which] is the fourth highest by an NU signee in program history.” He has started every game for the Wildcats since arriving on campus. While he is only a true junior this season, it is very likely it will be his last in a Northwestern uniform. According to Pro Football Focus, “Skoronski has posted a top 15 grades among Power Five offensive tackles in each of the last two years (81.4 and 83.8).” Skoronski might be slightly undersized for an offensive tackle draft prospect (6’4, 294). But if Pat Fitzgerald and company are going to turn things around offensively, it will be on the shoulders of Skoronski.

The No. 7-ranked player overall and the nation’s No. 1 offensive tackle from the 2020 class, Paris Johnson is the best Big 10 offensive linemen returning for the 2022 season. Even at a program as talented as Ohio State, Johnson appeared in five games as a true freshman. This included the College Football Playoff National Championship against Alabama. Last season Johnson made his starting debut at the right guard position. But 2022 will shift him back to his original position. Again from Pro Football Focus, “despite not playing his natural position at tackle, the 6-foot-6, 315-pound five-star recruit earned a 79.1 PFF grade that ranked 16th among Power Five guards.” It is clear that his versatility, athleticism, and experience will make life hard for opposing defensive coordinators. Buckeyes quarterback C.J. Stroud is going to have a pretty clean jersey with Jones and Johnson protecting the edges.

Deal Reached: Cincinnati, Houston, UCF Officially Joining The Big 12 in 2023
Who Is The Most Impactful Big 12 Newcomer?