Marcus Freeman introduced himself to the Notre Dame football community on Monday afternoon and made a sparkling first impression. As the Irish move on from 60-year-old Brian Kelly, 35-year-old Freeman was full of life at the event thanking those around him for the opportunity.

By the time Freeman introduced himself with a simple “I am ready for this challenge”, it had been a whirlwind week for the young head coach and his family. Monday’s 2:00 PM press conference came a week to the day after the Kelly rumors broke. Since then, Freeman had been offered the highest-paying salary for a defensive coordinator by LSU and went through several interviews for the Irish head coaching position.

But all that didn’t stop Freeman from wowing those present: “The chance to lead the football program at the University of Notre Dame is an opportunity of a lifetime, and I would never take that for granted,” Freeman said. “I’m ready to lead this program to the greatest heights.”

Certainly, expectations will be high for Freeman, after players and recruits campaigned for his promotion on social media. Notre Dame has had two College Football Playoff berths in the last four years, as well as a 5th place ranking this season. This feels close to breaking through. “We’re close. We’re not there yet, but we’re close,” Freeman noted when asked about championship aspirations. “It can be done right away. Next year we have to have intentional efforts to make sure we’re doing whatever it takes.”

Freeman’s mindset is clear, and he is ready to roll as the 30th head coach in Notre Dame football history. As he takes the reigns, his eyes are on bringing the Irish to their 12th national championship.

A common trend throughout Kelly’s tenure was his frustration with the Notre Dame standards. Even in the week he’s been at LSU, Kelly has frequently used phrases like “unlimited resources” to describe the opportunity with the Tigers. Well, at least as Freeman introduced his goals and mindset to members of the media, it appears that won’t be an issue. “You have to embrace this place, the things that make this place different. If you embrace everything that comes with UND, you are going to be better because of it.”

Freeman repeatedly reinforced that he doesn’t believe that Notre Dame’s unique standards should inhibit its recruiting. And if the early returns from his 11 months in South Bend are any indication, he’s correct. Freeman has already helped build a recruiting class that is ranked in the top five for 2022. “You’ve got to be a relentless recruiter. If you can’t recruit, you’re probably not going to be the best for our university and our team,” Freeman said. “I better be the #1 recruiter, the lead recruiter in every kid we recruit. If I’m not the lead recruiter, we’re cheating.”

That relationship-first coaching style has made Freeman a popular coach. And it makes him a perfect candidate to protect the Irish culture. Being a student-athlete at Notre Dame requires incredible time management and balancing. A father of six, Freeman can appreciate that and continue to foster a culture that is predicated on more than just gridiron success: “You have to have people around you that are willing to tell you to go home and spend time with your family. We’re going to build a culture that reminds each other what really matters.”

It’s easy to look at the long-term implications of the Freeman hire. But, as the former Cincinnati defensive coordinator reminded everyone, right now, his goals are short-term. “I’m ready to get to work. My sense of urgency is for right now. It’s to make sure this team is prepared on January 1st in the Fiesta Bowl to be prepared to be victorious versus Oklahoma State.”

Freeman discussed some logistical plans for what is sure to be a little bit of an unorthodox preparation for the Irish. He noted that no defensive coordinator for 2022 would be named until after the Fiesta Bowl. As for who would assume those duties for the matchup with the Cowboys, Freeman kept that question mostly unanswered. He didn’t rule himself out, but in his standard player-first mentality, Freeman said he would take himself out of consideration if not the best option. “I won’t cheat those players. If I can’t give them my full attention, then I’ll have somebody else call the plays.”

Freeman also did not provide an update on All-American safety Kyle Hamilton. He emphasized that Hamilton’s health is the number one priority and he would support whatever his decision was. Hamilton is a projected top-10 pick in the upcoming NFL Draft, but he has not played since October 23rd.

The hype leading up to this press conference was very real. As Freeman introduced himself and his coaching philosophy, he probably could have said a lot of things that would have been taken well. However, in Freeman fashion, the newest Irish head coach hit a home run. He set the expectation, the standard, and the goal for Notre Dame, making it clear what he’s here to accomplish.

“I plan on leading this team with an unwavering standard. It’s called the Golden Standard. One is to challenge everything. Challenge everything is a mentality to find a better way. Number two is unit strength. Unit strength is love. It’s making a choice to love your teammates. It’s what turns players into a team. Number three is a competitive spirit.” Continuing, he said, “I believe leaders are born, but winners are created. This standard will be unwavering and it is going to be what drives this football program to its 12th national championship.”

Notre Dame’s first look at Freeman as a head coach will be January 1st. The Irish take on Oklahoma State in the Fiesta Bowl, looking for their first New Year’s Six bowl victory since 1994. 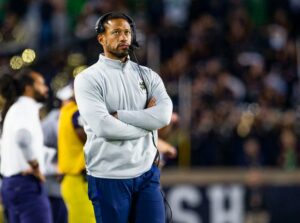