The Texas A&M Aggies enter the 2021 season after finishing 8-1 in an SEC-only regular-season schedule. They capped the season off with an impressive win in the Orange Bowl against the UNC Tar Heels. Last year, they were left out of the College Football Playoff as the 5th seed. This was primarily due to their devastating loss to Alabama at the beginning of the season. Here are possible scenarios for the Aggies to make their first trip to the CFB Playoff.

First, take a look at Texas A&M’s schedule for the upcoming season. 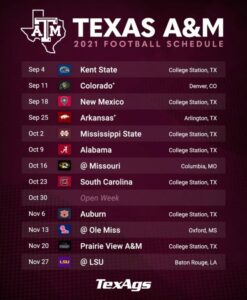 The crucial matchups for Texas A&M are against SEC West opponents: Alabama, Auburn, Ole Miss, and LSU. Among these crucial games, the Aggies must win at least three out of the four to present a solid case to the playoff committee. Two of these scenarios confirm Texas A&M’s spot in the playoffs, but the others are dependent on the performances of other teams as described below.

This is definitely the clearest path for A&M to reach the playoffs, but it’s also the least likely. If the Aggies can go 12-0 in the regular season; and they beat Florida or Georgia in the SEC Championship, there is not a chance that A&M can be left out of the top four spots. Ultimately, they would have a strong argument for the top seed. As mentioned before, this scenario is highly unlikely, however, it is the best possible outcome.

Case 2: Aggies win the SEC with one Loss

This scenario should vault the Aggies into the playoffs as well, but it is again unlikely. For an appearance in the SEC Championship, the Aggies would have to win the SEC West over Alabama and LSU. This means A&M would have to beat the Crimson Tide at Kyle Field and pull off a win against the Tigers in Death Valley. The one loss, in this case, would most likely come against the Ole Miss Rebels, who should have a prolific offense this upcoming season. Maybe even the Auburn Tigers if the Aggies slip up at home. Again, Texas A&M would need to win the SEC Championship against the SEC East division winner to make the playoffs. As a reminder, a two-loss team has yet to make the college football playoffs.

Basically a repeat of last year, this again seems like the most likely outcome for Texas A&M. The one loss would come against Alabama. Who the Aggies have yet to beat since Johnny Manziel’s freshman year in 2012. If the Aggies keep this game close, they should have a solid case for the committee. Again, IF they beat every other team and finish 11-1. Again, the problem is the last playoff spot is dependent on other teams’ performances. Clemson, Ohio State, and Oklahoma look bound to win yet another conference title this year. It would not be foolish to assume that all 3 of these teams make the college football playoffs, but at least one would have to lose two games for Texas A&M to have a chance. Notre Dame and Cincinnati also pose a threat. If either of these teams finishes 11-1 or 12-0, the playoff committee will have another debate for the 4th seed. Finally, the PAC-12 champion would need to have two losses for A&M to be considered in the playoffs. While much has to happen for the Aggies to grab the last spot, it is still a possibility.

This scenario is the most interesting, for the SEC West winner would have 2 losses. Of course, this means Alabama, LSU, and Texas A&M would finish with 2 or more losses. The Aggies would have to beat both Alabama and LSU for this to even be a possibility. The two losses would stem from A&M slipping up against other SEC teams or perhaps a non-conference matchup. After a 10-2 regular season, the Aggies must win the SEC Championship to have a chance for the playoffs. While no two-loss team has made it to the playoffs, the committee’s respect for the SEC could guide A&M to a playoff spot if there is no one-loss team in the SEC. Remember, Ohio State made it over Penn State in 2016 even though Penn State won the Big 10. So, there is always a chance.

Weighing all of the scenarios, case three appears as the most plausible for the Aggies. Cases one and two, while possible, feel slightly out of reach with Alabama in the division. However, if Texas A&M grabs a spot in yet another New Year’s Six Bowl, that should not be considered as a disappointment. With a new quarterback at the helm, an appearance in the New Year’s Six Bowl is an accomplishment. Even more so when competing in the SEC West. The Aggies are bound to be in playoff contention for years to come.