Youngstown State couldn’t overcome Missouri State’s second-half surge to win the Missouri Valley Conference Title. The season is coming to an end and this game had major implications on the line.  For former Louisville and Arkansas coach Bobby Petrino, and Missouri State, it was a win to make it into the playoffs or go out eliminated.  For Youngstown State’s Doug Phillips, it was to get that first road win since 2017 and finish the season strong.

The first quarter saw little on offense as both teams struggled to make anything happen. Both defenses were ready for the schemes the offensive coaches had prepared. Key players in this first quarter on defense for the Penguins were Grant Dixon, James Jackson, Ty Eddington, and Quincy Lenton. Each combined for four tackles.  Meanwhile, Missouri State’s defensive standouts were Tylar Wiltz, Tahj Chambers, Kyriq McDonald, and Montrae Braswell. All four combined for 11 tackles and one tackle for loss.

Things started to pick up after a slow first quarter.  With Mark Waid out due to a wrist and hand injury, Joe Craycraft once again got the start. This was Craycraft’s first start since UNI in week two.  Craycraft found Andrew Ogletree and then Malick Mbjob on two straight passes. Even though the Penguins were then stopped on third down, they still got a Colten McFadden field goal making it 3-0.

After Youngstown State went ahead a scuffle broke out involving Tobias Little and D’Marco Augustin.  An unsportsmanlike conduct penalty was awarded on both teams and Little was subsequently ejected.  The Bears also lost starting quarterback Matt Struck to an injury.  However, that didn’t stop Missouri State from clawing its way past the Penguins. Jeremiah Wilson had a few good runs before scoring from three yards out. The rushing touchdown made it 7-3 going into the half.  Both teams were in need of a better offensive turnout for the second half.

The first two quarters had these two teams locked in a defensive battle and seemed like this would come down to the wire.  However, in the third quarter, things changed quickly on both sides.  Missouri States’ first drive of the second half took only 13 plays. Backup quarterback Jaden Johnson scrambled several times during the drive that ended in a touchdown pass. Johnson found Damoriea Vick eight yards out and extended the Bears’ lead 14-3.

The Penguins had a good drive going on their first possession of the second half, but an illegal formation put a stop to the momentum.  On fourth and short, Craycraft gave the ball to Jaleel McLaughlin but he was stopped for a loss of nine. This forced a turnover on downs and swung the momentum back to Missouri State. After that, it was another Bears touchdown. Johnson found Vick for 32-yards extending the lead to 21-3.

Youngstown State needed to make a 17 point comeback if it wanted to end its season strong. In the fourth quarter, it started out good as former Liberty Leopard, Dra Rushton, got some playing time and drove the Penguins down the field. He scored on a six-yard pass from Craycraft to close the gap 21-10.

The Penguins got the ball back after a Bears three-and-out looking to cut the Missouri State lead. Unfortunately, Youngstown State tried a trick play and brought in the other quarterback Demeatric Crenshaw. Craycraft passed it backward, but the Bears weren’t fooled, causing a fumble and becoming CO-MVFC champions, winning 21-10 for the first time in 31 years. Petrino turned a team that only had one win in 2019 into a potential FCS contender.

Rushton: four attempts for 24 yards and a receiving touchdown.

Mbodj: one reception for 11 yards.

Wilson: five rushes for 14 yards and a touchdown.

Lorenzo Thomas: One reception for 21 yards.

Youngstown State (1-6) looks to end the season on a high note. The Penguins have their makeup game against the sixth-ranked North Dakota Fighting Hawks (4-1) who have been inactive a bit due to COVID-19 outbreaks.  Kickoff is set for 12:00 PM ET on April 17th on WBCB or ESPN+.

Even with winning the Missouri Valley Conference Title, Missouri State still may not make the postseason. The Bears have a pretty good chance now, especially with the three games they have played in the fall and the showing they had this 2021 spring season. 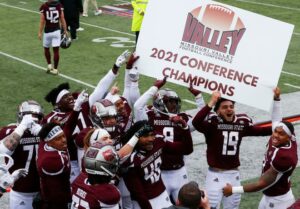