The Ball State Cardinals beat the San Jose State Spartans 34-13 in the 2020 Arizona Bowl. In the preview for this game, we predicted the possibility of a high-scoring back-and-forth bowl game. This was not the case. San Jose State played the game without two coordinators and without Mountain West Conference player of the year, Cade Hall. All were out due to COVID-19. The Spartans then lost a leader on the offense, tight end, Derrick Deese Jr., to injury on the first play. In addition, San Jose State quarterback Nick Starkel suffered a knee injury in the second quarter but would return to close out the game.

San Jose State was looking to complete a perfect, undefeated season before meeting Ball State in the Arizona Bowl. The Cardinals had other plans and its defense, which has been dominant all season, was able to get the win. So, how exactly did Ball State knock off a ranked, undefeated, San Jose State?

Early in the first quarter, Antonio Phillips returned a Starkel interception for 53 yards that resulted in a touchdown for the Cardinals. It was Phillips’s second interceptions of the season. Starkel threw three interceptions in the loss. Ball State won the turnover battle, which was a goal when the game started. Both teams have a solid defense, usually in the run game. However, the Cardinal defense got all of its takeaways through the air. Ball State had two turnovers of its own, but it was not enough for San Jose State to overcome the four interceptions that its quarterbacks threw.

It was all Ball State until the third quarter. First, capitalizing off of a Starkel interception early in the first quarter. A defensive touchdown. Then, two minutes later, running back Will Jones scored a three-yard touchdown run. Five minutes after that, Tye Evans got in on the action and scored his own rushing touch down for three yards. Finally, with one minute left in the first quarter, quarterback Drew Plitt must have felt left out because he scored a rushing touchdown from one yard out. On its three scoring drives, Ball State ran the ball 14 times. This is against a very stout rush defense for San Jose State. The Spartans were definitely missing Hall.

San Jose State didn’t get on the board until a 99-yard kick return for a touchdown in the third quarter by Charlie Bostic III. The Spartans scored one more time in the third and that was the last score of the game for either team.

It was a different game than many expected, but Ball State was able to get its first bowl win in 10 appearances. This was the Cardinals’ first-ever bowl win. Ball State dominated from start to finish on all levels. Both teams finished a strange season with a 7-1 record. 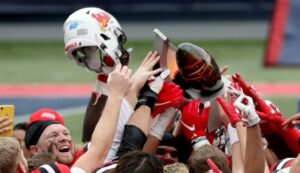