If there was a massive twist on the eve of the Davis Cup Finals where it was decided that the Davis Cup Captains should just have to play one set against the other captains to see who would win the trophy, who would be best placed to do so?

For this imaginary event we are allowing ourselves to imagine these men are all within the ages of 25-30 rather than imagining a 73-year-old Shamil Tarpishev take on a 39-year-old Mardy Fish. All the rest of the format remains the same, so the group stages evolves into the knockout rounds.

Let’s see what happens in this mythical tournament… 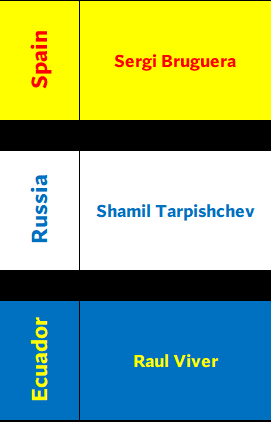 A bit of a cakewalk here for Spain’s Sergi Bruguera. The former Roland Garros champion has no trouble dealing with the Russian army’s best player in Tarpishev, although he is slightly concerned by the army members surrounding the court in support of their comrade. Raul Viver, former world junior #1, demands a clay court to be brought into the Madrid Arena but they only have the blue clay left from the ill-fated Masters series event. However, he also defeats Tarpishev, who is concerned about his reputation back home after two defeats.

The final group game is the longest of the tournament as Viver and Bruguera play long clay court style rallies from the back of the court, but the Spaniard eventually turns on the style to win. 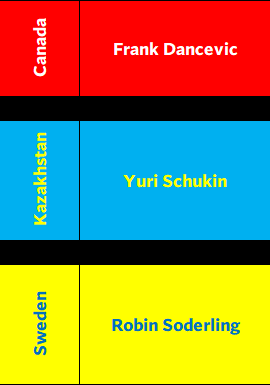 Dancevic had lost his appeal to not use the time machine before the tournament as he was hoping to take advantage of his tender years but he is still able to squeeze past Schukin in a tiebreak. Soderling and Schukin use their entire warm-up discussing the French Open as Soderling tells Schukin of the time he beat Rafael Nadal there and Schukin replies with his famous Round 1 win over Rajeev Ram in 2010. Soderling wins the match, though, 6-1.

Dancevic puts up a good fight in the deciding rubber but Soderling shows his class in a comfortable 6-3 win. 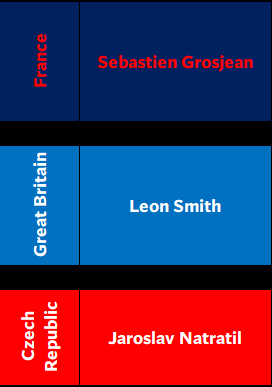 Massive controversy in Group C as Leon Smith walks out to face Jaroslav Natratil in the opening rubber. It turns out that the British player is actually Andy Murray in a Leon Smith mask, but Smith explains that he found the rules unfair as he had never been a professional tennis player. Smith is defaulted from the tournament and Murray has to play in the real Davis Cup finals as punishment.

Natratil tries his best against Grosjean but the Czech is a doubles specialist and his attempts to drag Martina Navratilova from the crowd to team up with him also see the Czechs disqualified from the event. Grosjean sails through. 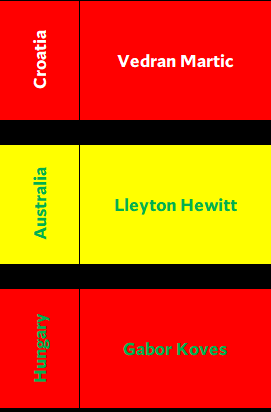 Vedran Martic and Gabor Koves take one look at the drawsheet and decide that it is best to withdraw from the event altogether. Hewitt still takes to the court and plays himself for five hours taking turns in either leaping the net or running around the posts to make things more difficult for himself. Eventually, Hewitt wins 7-6 (79-78) in the tiebreak against Hewitt. 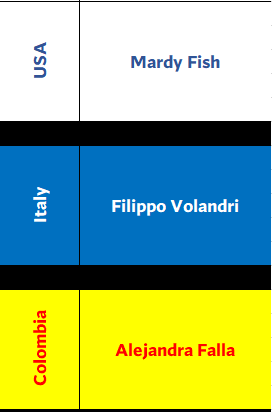 In these conditions though Fish’s serve is too big for Falla. He is another who would prefer to be playing on clay. Volandri and Falla play out a tough set with the Italian edging it 7-5. Fish and Volandri trade breaks early in the set but Filippo hits a double at a poor time and the American takes the victory. 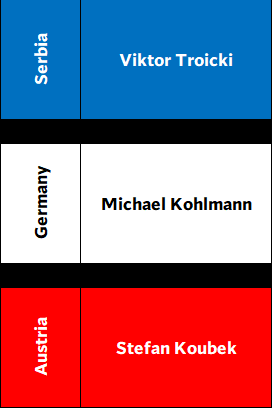 Another group of good quality here, all again reached the top 100 in their singles careers. Troicki and Koubek had too much for Kohlmann, who was more successful in doubles than singles.

The Serbian and the Austrian had a real battle though, the left-handed Koubek caused Troicki lots of problems, was a break up, and then was taunting him about getting further in a Grand Slam than the Serbian. The Serbian responded by showing Koubek his bank balance and that sent Koubek into a spiral of despair and Troicki won a deciding tie-break.

The home Spanish crowd loved seeing Bruguera beat Volandri in the early session and Robin Soderling was too powerful for the Austrian in the last quarterfinal.

The other two matches were much more closely fought though. Sebastien Grosjean and Viktor Troicki were just about to enter a tiebreak when the Frenchman surprised Troicki by removing his backwards cap to reveal what can only be described as almost thirty years of bad hat hair. Troicki couldn’t handle the sight and promptly lost serve to bow out.

In their actual careers Fish and Hewitt had a 2-2 record but, importantly, Fish was the winner on both occasions when they met on a hard court. Fish won this match as well in a tie break, Hewitt admitting that he had potentially worn himself out in the group stages.

Grosjean’s attacking game and ability on faster surfaces saw him go after Bruguera from the start and the Frenchman’s all-round game proved too much for the Spaniard.

Fish and Soderling started beating lumps out of each other but eventually the Swede, who retired in real life at 26, got the all important win.

No Grand Slam titles, but 24 ATP titles between them and six Grand Slam semifinals. Both players also peaked at #4 in the rankings but where Grosjean probably got the absolute maximum out of his ability, Soderling never got that chance. The Swede seemed to have all of that frustration bottled up and ready to explode in this final.

He bombed down serves, smashed forehands and knifed volleys all through the match and Grosjean had no answer to the power game of the Swede.