The move to a finals format for the Davis Cup was, and still is, a source of controversy, but it does provide an engaging end-of-season tournament. The countries have been split into six groups of three with only the top team certain of qualification. Two further teams will qualify for the knockout stages as the runners-up with the best records in the groups (matches won, then sets won).

Spain are the defending champions from 2019, the 2020 tournament wasn’t held for obvious reasons. Canada were the runners-up, therefore those countries are seeded one and two. However, Spain are without Rafael Nadal and Roberto Bautista Agut and Canada are missing Felix Auger-Aliassime and Denis Shapovalov. Perhaps there could be an opening then for a new champion in 2021.

The tournament is split over three venues, all indoor. The Madrid Arena (Madrid, Spain), Olympia-Halle (Innsbruck, Austria) and Pala Alpitour Arena (Turin, Italy) are the hosts for the group stages. The semifinals and final will be hosted in Madrid.

It therefore does pay to have a strong squad of players to choose from. Some countries are certainly stocked deeper than others though as the stats bear out.

Even without Rafael Nadal the Spanish squad looks a strong one. Able to name three men inside the world top 50, including a potential star in Carlos Alcaraz. They also have options in the doubles with Marcel Granollers in fantastic doubles form and ATP Tour doubles title winners Feliciano Lopez and Pablo Carreno Busta being potential partners for Granollers. With no Nadal, it is likely that Granollers/Lopez will start as first choice as they did in 2019.

The problem for the Spaniards is that they have the Russians in their group, as they also did in 2019. This time around Medvedev arrives as one of the elite players in the world, Rublev is in the top 5, Karatsev has had an excellent season and Karen Khachanov is very effective indoors. You would expect that Russia would be favourites in both singles rubbers in all of their group games regardless of their opponents. The obvious weakness is a lack of doubles specialists. In 2019 Russia were very much a two man band, Rublev and Khachanov played all of the rubbers between them, they may well be the first choice doubles pair here, they went 2-2 in 2019.

Ecuador didn’t play in 2019 and, obviously, all of their players are clay court specialists. Emilio Gomez is a fabulous player and at least has ATP Tour experience. Roberto Quiroz had a nice little run to the quarterfinals of Delray Beach in January but hasn’t played a main draw match on the senior tour since then. Gonzalo Escobar is ranked inside the top 50 for doubles and any matches that Ecuador win here are likely to be doubles.

This group looks particularly weak. The Canadians have only named four players with Auger-Aliassime & Shapovalov missing. Vasek Pospisil was sensational at this event last time but this might be a stretch too far for him this time. The Canadians also lack specialist doubles players as well so could be vulnerable.

Kazakhstan have two handy singles players, especially indoors. Kukushkin and Bublik also teamed up for the doubles in 2019 so it may well be a two man band again for Kazakhstan but Golubev is a decent doubles backup if a change is required.

The Swedes didn’t play last time but the Ymer brothers will hope to drag them through to the knockout stages. Mikael is inside the top 100 now but neither would class indoors as their favourite conditions to play in. However, the team aspect may be helpful for them to galvanise their games.

This group will be a battle. France have an uncharacteristically weak looking squad. There is a lot of experience there, and a crack doubles pairing in the ATP Finals champions Herbert/Mahut. However, their #1 singles player is the young Arthur Rinderknech who is still outside the top 50 and still a maiden in terms of title wins on tour. He is a big talent though and has a big game, especially indoors. Judging by their records I would expect to see Richard Gasquet ahead of Adrian Mannarino in the second slot too.

Most of the British team have had excellent seasons. Cameron Norrie is the highest ranked singles player in the group and will expect to win his rubbers, Evans is the second highest ranked player as well. They also have two doubles specialists in Salisbury and Skupski. but all three singles players are also good doubles players too, especially Evans. It is a well balanced squad, albeit without a player with a dominant serve which is always useful in these conditions.

The Czech Republic can’t be ruled out either. They have a collection of very interesting singles players, none ranked outside of the top 150 in the world. They are very much used to these central European indoor tournaments too, they grow up in them. Neither France nor Great Britain will have an easy match against this team, however there is no real doubles pedigree which could really let them down in a decisive rubber situation.

Croatia will probably be reliant on a resurgent Marin Cilic and the best doubles pair of 2021 in Pavic/Mektic to have a deep run here. Borna Coric has had an injury hit season but if he feels confident to play second singles and can get near some of his best form Croatia could be dark horses for the title.

Australia have three decent singles players but nothing outstanding. They can never be written off though, especially in team competition.

Hungary may well run a two man show in their rubbers. Marton Fucsovics is their outstanding player and will probably be utilised in the doubles as well, probably alongside Attila Balazs.

Another big battle for qualification here with a dangerous outsider to contend with. The US have brought the bombers to Europe here. There won’t be many breaks of serve in matches involving Isner, Opelka, Sock and Ram. This does however, mean that matches may well be decided on very few points and it is then about who wins those points.

The Italians finished bottom of their group in 2019 but now have seen great improvements in Jannik Sinner and also Lorenzo Sonego who has a better indoor games won record than any US singles player. Their doubles is the weakest in this group though and could prove to be a problem for them.

Colombia will probably finish bottom of this group, like all South American countries their skills lie on the dirt more than indoors. However, they do have Cabal/Farah and Daniel Elahi Galan has played 20 main tour matches this season and is very close to cracking the top 100 in singles.

Interesting to see that Novak Djokovic has committed to this tournament. It is another indication of how much he does love representing his country and I’m sure it means a lot for the team to have him there. He was there in 2019 as well but it wasn’t enough to drag Serbia past the quarterfinal stage, but they should qualify from this group. They have the top three singles players in the group and some good doubles options.

Germany are struggling to produce top singles players at the moment, albeit Gojowczyk and Struff do have good records indoors. They also have the best doubles team in the group with Krawietz/Puetz.

Austria’s doubles are also the best part of their team but Marach/Oswald are not at the peak of their powers. Dennis Novak could beat Jan-Lennard Struff but it is difficult to see him getting anything out of Djokovic, or indeed Lajovic or Krajinovic. 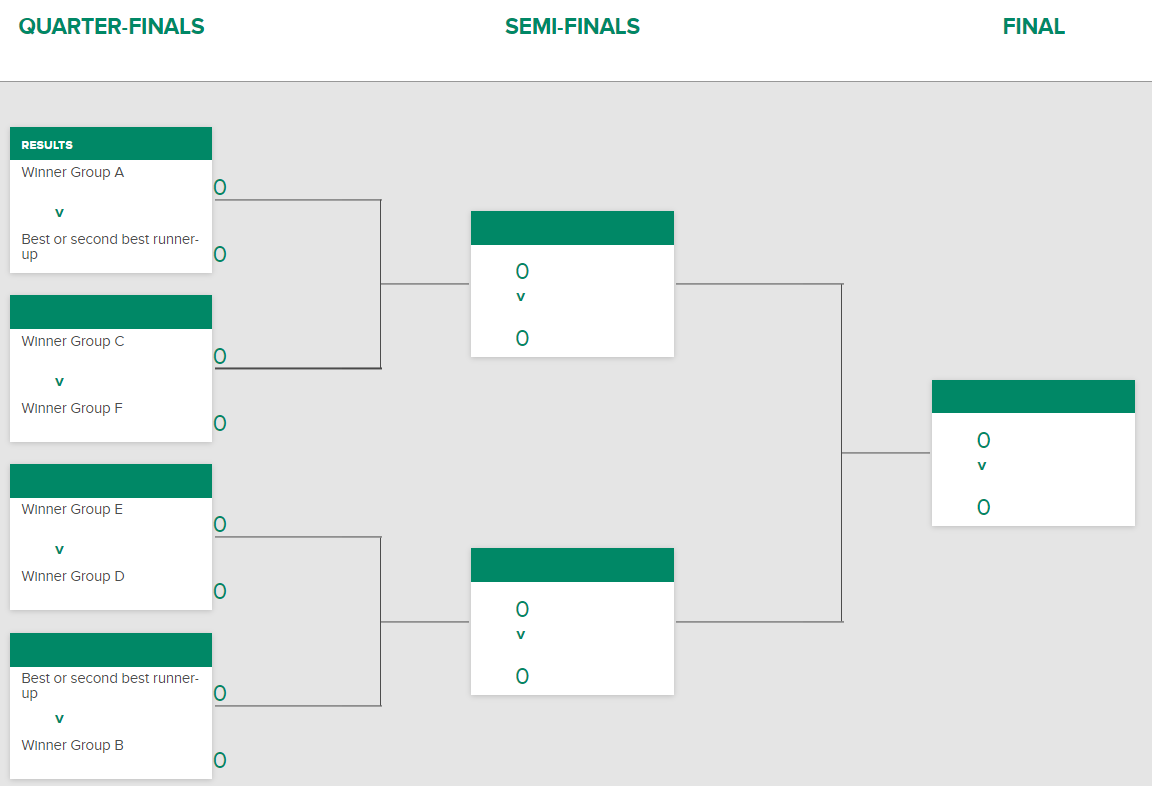 If the groups play out as predicted then the quarterfinals would line up as follows:

Obviously the ties become more difficult to predict now but I think Spain, Serbia, USA and Russia will progress. Djokovic will have to be on song to pull the doubles out of the bag against Great Britain.

Again, Djokovic will be the key player in the first tie. It may be a bridge too far though for the great man to continue to get the job done in the doubles. Spain will have the crowd with them by this stage of the tournament as well so that could be a key factor in this tie. In the second semifinal I prefer the depth of the Russian singles players to have a good chance of winning both singles rubbers.

This was very nearly the final in 2019 but Russia were shocked in the semifinals by Canada. With the extra reinforcements we now have a repeat of the Group A matchup. I favoured the Spanish in the group and mainly for the same reason, with the home advantage, I am leaning in their direction again. It is a big tournament for Carlos Alcaraz and if Spain are to do well here then the youngster will need to perform the role that Bautista Agut did so well last time in winning all of the second singles matches. He would be up against Andrey Rublev here and I still have doubts over Rublev’s mentality and execution in the big matches, I would rather side with a Madrid-inspired youngster with fire in his racket.