Had the item been instead entitled Captain Fantastic and The Red Clay Cowboy, it could’ve doubled as a career bio of Spanish tennis superstar Rafael Nadal. Nadal’s feats on clay are unmatched in tennis history.

He’ll look to continue that epic success when the French Open is held at the Stade Roland Garros in Paris, France, from May 30th to June 13th. Were you to check the latest odds on the French Open at Canadasportsbetting.ca, you would see that Nadal is the heavy favorite to again capture the championship on the clay courts of Roland Garros. 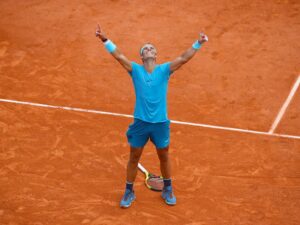 “Nadal Roland” by Cedric Lecocq/FFT is licensed under CC BY 3.0

Cited as the King of Clay, Nadal is widely-viewed as the greatest clay court player to ever hold a tennis racquet, with good reason. With his recent win at Barcelona, he’s won a record 61 clay court titles during the Open Era of men’s tennis.

“If you have any advice, don’t hesitate. You must be on top physically and mentally. I once beat Nadal at Roland Garros but I lost very, very often. And I think that’s the biggest challenge you have in tennis today. But I love challenges, it requires you to give your best.”

Nadal holds records for the most wins in the French Open (13), Barcelona Open (12) and Monte-Carlo Masters (11). He holds ATP records for the longest consecutive match (81) and set (50) winning streaks on a single surface in the history of tennis during the Open Era.

That’s what Spanish tennis legend Manuel Orantes believes, that the combination of Nadal and Roland Garros is too much for any player to overcome.

“Everyone knows that when you play with Nadal you can only win if you are 150 percent of your level and he drops to 70 percent,” tennis hall of famer and former world No. 2 Orantes told Radio Marca. “He has a mentality and a strength that I had never seen, you never see him throw the towel.”

Last year, Nadal didn’t drop a single set en route to winning his fourth straight French Open crown. He’s won 28 matches in a row at Roland Garros. In 2016, Nadal was forced to withdraw from his third-round match against fellow Spaniard Marcel Granollers due to a wrist injury. Djokovic, a 7-5 6-3 6-1 winner over Nadal in the 2015 quarterfinals, was the last player to defeat Nadal at Roland Garros. 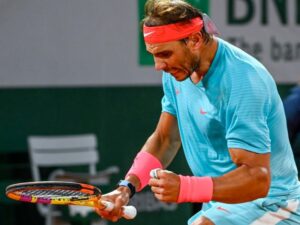 “Nadal Roland” by Anthony Dibon/Getty is licensed under CC BY 3.0

Who Could Beat Nadal?

“There is a player like Thiem that if Rafa is not at his best version because he is injured, he could possibly beat him but in tournaments like Roland Garros, five sets, it is almost impossible to endure so many hours and beat him,” Orantes said.

Even Thiem admitted that beating Nadal at the French Open might be “one of the most difficult things to do in tennis and in sport in general.

“I think everything needs to be perfect on that one day,” Thiem told tennishead.net. “I think the only way is to improve in general all aspects of your game and to play perfect clay-court tennis. That’s the only chance, but even then I think it’s not in my hands. It’s still in his.

“You have to hope that he doesn’t have the best day and I have the perfect day. I think there are so many things that need to work for you to have a chance.”