In one of the most bizarre incidents a tennis match can offer, this is how the conversation between Nick Kyrgios and umpire Mohamed Lahyani panned out (from what could be made of the conversation). The US Open hasn’t quite started off great in terms of controversies, with extreme New York conditions, and Alize Cornet receiving a weird code violation. But, Lahyani giving Kyrgios a pep-talk and directly influencing the course of the match surely is the icing on the cake.

It’s no secret that Kyrgios isn’t the most hardworking player on tour. If anything, he’s widely disliked for not taking tennis seriously and often tanking his matches. He’s had to deal with fines and frowns throughout his career for that. His 2nd round match against Pierre-Hugues Herbert wasn’t any different. Kyrgios wasn’t playing like he cared, trailing 4-6 0-3, serving 130+ mph double faults, and barely attempting to make returns. That is, until Lahyani thought he’d had enough and decided to give Kyrgios a pep-talk that might get him to do better! And boy did it work wonders! Kyrgios completely turned the match around, losing just six more games to win 4-6 7-6(6) 6-3 6-0.

Kyrgios is sometimes unfathomable for sure. But when he’s focused and enjoying himself on court, there are few tennis players as smooth and effective as him. This gives rise to an important question. How much longer does Kyrgios need babysitting? He isn’t the only player having to fight through the mental barriers, and neither is he the only diamond that needs polishing. How bad is his mental state with regards to the game, that the chair umpire has to come down and ask him to stay focused?

Lahyani’s history of advice and run-ins with Kyrgios

Mohamed Lahyani is one of the most popular umpires on tour. He is a lot more interactive with players as compared to his counterparts. Sometimes, funnier as well. But this charismatic persona comes with its share of complications, something which Lahyani has gone through a lot. Warning a player if they’re tanking is a part of the chair umpire’s job. Different umpires have different ways of dealing with the situation. In his umpiring career, Lahyani has had to deal with many such players. Most recently in 2016, Lahyani told Bernard Tomic, “Do not even think about that. Do your best,” when the Aussie wanted to quit to prepare for Australian Open. Before that in 2011, at an ATP event in Stockholm, Lahyani guided Gael Monfils verbally from going into a meltdown regarding a disputed line call.

Furthermore, Kyrgios has had his fair share of run-ins with Lahyani. He’s been involved in as many as four clashes with Lahyani in the last three years, which makes today’s events a lot more difficult to understand.

Was it the right call from Lahyani?

What Lahyani did today, though, is quite unimaginable. For a chair umpire to come down from his seat and try to cheer a player up, on tennis’ biggest stage, is probably not going to go down well with the authorities. Umpires are essentially asked not to show any bias towards a player. Staying professional regardless of the circumstances is what their job asks of them. Interacting with the players from the chair is one thing, and going over to a player’s bench and asking them to focus is wholly different. But, if you take a deeper look, Lahyani might’ve had good intentions – he wanted the players to give their all and play a good game, which quite understandably Nick Kyrgios wasn’t doing. So, was it the right call based on that? It wasn’t the wisest decision, especially since Kyrgios turned it around right after! 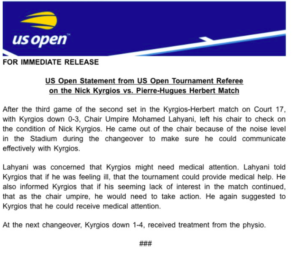 But, was it a justified one? USTA’s official statement mentions that, because of the crowd noise, Lahyani apparently couldn’t converse properly with Nick Kyrgios from the chair, and Lahyani felt he needed to see if Kyrgios wanted medical attention or if he wanted to quit. He had to come down to have a chat due to the high noise level in the crowd. If that is really how it went down, and it’s not damage control from USTA, Lahyani might as well get the benefit of the doubt. And if not, it will be clear that good intentions led to Lahyani’s decision–but without any doubt, it was poorly carried out.