This month, New Zealand All Blacks legend Sonny Bill Williams called time on his professional rugby playing career. Although already retired from rugby union at both club and international level, Williams announced he had played his last game in league too, officially hanging up his boots in rugby for good.

In a career that spanned 17 years, his accomplishments speak for themselves; winning one Mitre Cup, one Super Rugby Title, as well as two NRL Premierships. Williams was fortunate to hold the Ranfurly Shield, was a part of four Rugby Championships, six Bledisloe Cups series wins and – most notably in the realm of professionalism – a part of two Rugby World Cup title winning sides. Incredible reading.

Last Word on Rugby take a look back at Williams’ success in the sport, as well as looking ahead to his future following the announcement he strives to focus on a career in professional boxing, television, and in mentoring and coaching.

A massive thankyou to the public & fans for all the support over years. To my many teammates, thanks for the lessons & help along the way. It wasn’t a perfect journey,
but the lessons have helped shape me into the man I’m proud to be off the field today. #AlwaysAlhamdullilah 🤲🏽❤️ pic.twitter.com/aECnrTYCJs

Born in Auckland, New Zealand, Sonny Bill Williams (SBW) started playing rugby league from an early age and quickly showed a real talent for the game. In 2002, Williams was scouted by the Canterbury Bulldogs and was offered a contract in their youth setup. He accepted the contract and made a move to Sydney at the age of just 16, making him the youngest player ever to sign with a professional NRL team at the time.

SBW made his NRL debut in 2004 against the Parramatta Eels and from there solidified his place in the starting lineup as a second-row forward. Just months later, Williams was picked for the New Zealand rugby league international side and won his first cap in a match against Australia as the youngest ever Kiwi test internationalist.

To cap all of that, Sonny Bill Williams would play in the NRL Premiership final for his Bulldogs side. Off the bench, his debut season would transcend all others, as his team held up the Provan-Summons trophy after defeating the Sydney Roosters. Williams spent four years at the Bulldogs, making 73 appearances and scoring 124 points.

He swapped the NRL for rugby union in 2008 and would remain there for five years* until he made his return to Australia, after signing a one year contract with the Sydney Roosters in 2013. In his second stint in league, he played 45 times for the Roosters and accumulated 44 points in his short stint in New South Wales’ capital city. Although a short stint, Williams won the NRL Premiership with the Roosters and picked up the International Rugby League player of the year award for 2013.

After his success in Sydney, the powerhouse centre took another six years off from rugby league to reconcentrate on union. His final excursions in rugby league came in 2020, when he signed for up-and-coming side Toronto Wolfpack but after the club suffered financial difficulties, Williams moves back to Australia for his second spell with the Roosters.

He played his final game in October 2020 in an NRL semifinal loss to Canberra Raiders.

After a tumultuous break from the Bulldogs in 2008, Williams joined French rugby union side Toulon, coached by another All Blacks legend in Tana Umaga. Williams spent two seasons on the south coast of France, in which he finished runner up in the 2009/10 Challenge Cup competition. He would also make an appearance for the Barbarians select side, in a game against Australia in June 2009.

At the end of the 2010 season, Williams was offered the highest salary deal in rugby history to stay at Toulon but, he rejected it to move back to his home country New Zealand, in a bid to play for the All Blacks.

He joined Canterbury in 2010 and in his first season helped them win both the Ranfurly Shield and the ITM Cup. While at Canterbury, SBW was named in the All Blacks squad for the tours to Hong Kong and the Northern Hemisphere, and became All Black #1108 when he made his debut against England at Twickenham. He started the game at inside-centre alongside Ma’a Nonu to form the heaviest centre partnership the All Blacks has ever had at 212 kilograms. Williams’ test debut also made him just the fourth player ever to feature for the All Blacks without having played a single game in the Super Rugby competition.

Following a hugely successful 2010, Williams moved to Christchurch to join the 2011 Crusaders squad, and made his Super Rugby debut where he scored one try, and set up another in a win against the Waratahs. He went on to play 15 games for them in total, scoring five tries. Williams’ cross-code talent was clear to see, and continued to enjoy his run in the All Blacks squad.

Named as a part of the 2011 Rugby World Cup winning team in which he set a World Cup record for the most tries as a substitute. Sonny Bill featured in the final against France, where he picked up his first of two winners medals.

After the 2011 World Cup, Williams again moved club to the Chiefs and stayed there for three years. He played 28 times for the Hamilton side, scored 30 points and was a member of the Super Rugby winning franchise in 2012. 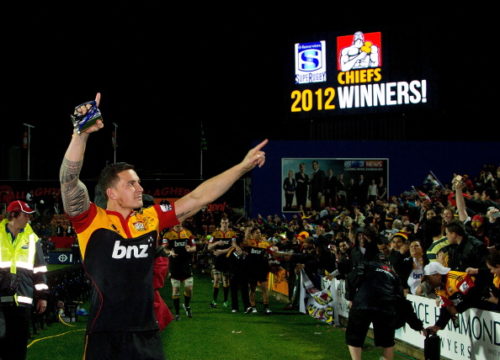 In performing to the high standards SBW was respected for, he won his selection in the All Blacks squad, and would be used as an impact player; utilizing his years of football to become a powerful center [where in the RWC2011, he was more a utility back]. Here, he won a second-consecutive World Cup with the All Blacks, after beating Australia 34-17 in the 2015 final at Twickenham. He was later praised by coach Steve Hansen as “one of the three players that set the World Cup on fire.”

SBW aims for Gold in All Blacks Sevens squad

Williams went go on to seek further glory with his country, by linking up with the New Zealand rugby sevens team for the 2016 Sevens Series. Playing in tournaments across the globe, he would be selected to represent NZ at the 2016 Summer Olympics in Rio de Janeiro.

Sadly, he was injured early and the men’s side would finish in fifth place but, before the end of the games in Brazil, Sonny Bill announced he would be returning to rugby union in New Zealand. This time, he signed a contract with his birth city club, the Auckland Blues. Here again, SBW was reuniting with close friend Tana Umaga. Williams played out the remainder of his rugby union career at the Blues, making 18 appearances for them and featuring in a brave win over the touring British and Irish Lions in 2017.

Earning multiple caps for the All Blacks, it would also include one note on his resume that he would not be well regarded for. In the second test of the Lions series, Williams was judged to have shoulder charged his opposition, and was given a red card. Only the third New Zealand player to be sent from the field (at the time).

That incident would not end his term wearing All Black, and he would again play at a World Cup in 2019. Williams went on to play a total of 58 games in the prestigious black jersey, scoring 13 tries. Sonny Bill played his last international game in the third-place playoff win over Wales in Yokohama.

Best known for his signature ‘out the backdoor’ offload, he leaves behind a lasting legacy in both rugby union and rugby league. One of very few people to play for New Zealand in league, union and sevens, the hard-hitting centre will go down as one of the most iconic players to have ever played the game.

Now at 35-years-old, Williams has turned his attention to continuing his career as a boxer. To date, he has fought professionally seven times in the Heavyweight category; winning all seven, with three being KO’s. The Orthodox boxer has been fighting since 2009 but, has not stepped into the ring since his last bout. A win over American Chauncy Welliver in 2015.

With that said, at 6ft 3in and weighing in at around 110kg, Williams has a promising future in the sport and has already proven his worth with the gloves on.

Alongside boxing, Williams has agreed to stay at Sydney Roosters – the club with which he had two spells as a player – as a coach and mentor. This week, he was announced as a commentator for new Australia pay-TV operator STAN. Furthermore, he remains an ambassador for both Powerade and BMW, as well as for Adidas. Williams signed an individual deal in 2014, and it is his marketable image which will see Sonny Bill and his family well positioned after a lifetime in contact sport.

On the field, fans were often in awe at his ability to offload the ball. His teammates were always in praise of his commitment to training and preparations, which see’s the humble athlete retire from the sport with a resume that few could possibly match.