Wales Louis Rees-Zammit’s performances to date have arguably seen him viewed as the player of the Six Nations so far.

The 20-year-old Gloucester winger has shown all of his potential with examples of his pedigree that is obvious even only in his first few Tests for Wales. That includes a solid, error-free performance against Ireland on his Six Nations debut as well as that stunning, man-of-the-match display against Scotland.

He has catapulted himself into a (nearly guaranteed) starting spot for Wales.

Whilst his attacking exploits have been the main talking points surrounding his performances, he has looked more than comfortable in his defence as well. In this article, Last Word on Rugby will break down his key interventions in the first two rounds of the tournament.

Wales vs Ireland, his first-half burst down the wing

This was Louis Rees-Zammit’s first touch of the match. In hindsight, it was a sign of things to come for the young winger.

He holds his width nicely and gets on the end of a fantastic Justin Tipuric pass. However, Irelands’ drift defence moves well to shut the space down and (on this occasion) does not give Rees-Zammit much room to maneuver. This was the first glimpse of his freakish acceleration in a Wales shirt and he shapes to motor down the touchline but then cuts back inside to seamlessly step inside Josh Van Der Flier, one of the most athletic and mobile opensides in the world. Evading Cian Healy’s clutches, however Van Der Flier did well to track back and bring Rees-Zammit down.

The example here is those extra five or so yards that Rees-Zammit made due to his athleticism and pure speed that gave Wales the vital front foot ball they required to break down the Irish defence.

It was Louis Rees-Zammit’s half-break that sparked a potential attacking opportunity. Wayne Pivac has looked to improve the side in the Six Nations window, as Wales lacked go forward and penetration in the autumn. So now, Rees-Zammit’s line breaking ability is a welcome addition to the Welsh attacking arsenal.

After two big carries over the gain line from Ken Owens and Alun Wyn Jones, Wales moves it wide. Although, they had not actually created an overlap, Ireland’s defence numbered up well on the Welsh attack as George North receives Gareth Davies’ miss pass and there is no immediate threat. However, look closer and James Lowe bites in too hard on North – this is potentially due to him buying North’s dummy in the lead up to Wales’ first try. All North had to do is delay, square up Lowe and ship the pass on. He showed good hands to move the ball to Halfpenny. 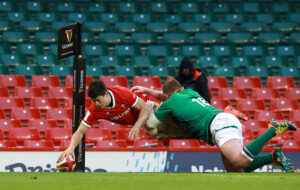 Leading up to the acrobatics, the Welsh fullback quickly sends the ball wide to Rees-Zammit, despite the best efforts of Hugo Keenan. At this point, Rees-Zammit still has a lot to do. Even though he has an open run to the line, Tadgh’s Furlong’s excellent defensive effort result in Rees-Zammit needing to finish expertly to dot the ball down.

He anticipates Furlong’s attempt, shifts the ball into his right hand, takes the ball at a standing start and it is his impressive acceleration that put him in the position to finish the try.

In watching this, Rees-Zammit did all the right things which in fact, made a superb Six Nations finish look very composed. Arguably, with his combination of pace and agility, he is potentially the only player on the pitch who could finish that score.

This try was very similar to his score against Ireland a week before. In the phase before the try, there was an opportunity for substitute, Willis Halaholo, to put the ball out the back to Biggar who had Tompkins outside him in a potential 4-on-2 situation. The Cardiff debutant opts to crash the ball up, much to Dan Biggar’s frustration. Play is recycled and Biggar receives the ball. There is still an overlap on if Biggar finds Williams out wide, but he drops the ball off to Tompkins. Chris Harris, who has been quietly excellent in the 13 jersey for Scotland, does fantastically to quickly wrap up Tompkins in a defensive effort that easily could have prevented the try. Tompkins skilfully pirouettes in the tackle and gets his pass away to Liam Williams with the overlap still on due to the brilliance of Tompkins. Williams draws Hogg and finds Rees-Zammit out wide.

This is a near carbon copy situation to his try versus Ireland. However, this time he steps inside the last man but does it with the same ease, fluidity, and panache as a week earlier. Forced to step inside this time; as Darcy Graham flies across to shut him down but, Rees-Zammit’s lightning feet take him past Graham as he strolls over without anyone laying a hand on him.

The example here is that as much as it is a fabulous finish from the winger, it is one which the 20-year old made look very, very easy.

Two wins in a row for Wales, even if against 14 men, unbelievable position from the start of the 6N. Terrific defence and wonderful solo performance by Louis Rees-Zammit at just 20, two tries, one absolutely brilliant, and great relieving kick near the end

For all the praise he has received for his attacking prowess, Rees-Zammit’s defensive capability has been very solid as well. It is here where he showed some real intelligence and gamesmanship in this play.

Scott Cummings latches onto Gary Graham’s carry and powers towards the line and, in doing so, obstructs Rees-Zammit and prevents him from getting to Graham. This was a very intelligent piece of rugby from the young winger. It would have been easy for him to pull out of the tackle as he saw Graham crash over yet by going to tackle Cummings, it flagged up to the referee that he was being obstructed. Had he left Cummings and not exaggerated his tackle on him, it is likely Cummings might not have been penalized at all.

A crucial point in the match; a fifteen-man Scotland looked like they were going to score at every attempt at the opposition line, so the penalty Wales Louis Rees-Zammit’s involved in forcing here, massively relieved the pressure for Wales. Had the Scots gone over there, they would have been three scores clear and, most likely, home and dry.

Of all the analysis of speed and finishing, this showed real maturity for a young man of his inexperience.

Absolutely world-class. This was a phenomenal try from the 20-year-old, and yes he deserved to take a bow.

That's how you win a #SixNations thriller in style. pic.twitter.com/fWRRtTdhul

For all the brilliance from our subject, much of the credit has to go to Willis Halaholo for his work in the lead-up to the try. Wales has a 3-on-2 situation, but it is easy to defend if Halaholo doesn’t attack the defensive line optimally. When the debuting centre-back receives the ball, he does so well not to just ship the ball along to Faletau (which would have given Harris and Van der Merwe the chance to just drift across and cut Rees Zammit’s space).

Instead, he fixes the two of them as he bursts outside Harris and towards Van Der Merwe’s inside shoulder. Even though Halaholo’s run is covered by Harris, it squares up Van der Merwe just long enough for to give Rees-Zammit space. While Halaholo’s pass is telegraphed it has done just enough to send the winger on his way. Fantastic, basic skills executed well from the young Cardiff resident. This opportunity is so often botched by attacking teams but Halaholo showed excellent skill to convert the overlap into a line break.

In fact, Wales had a near-identical situation against Ireland. Wales failed to capitalize on an overlap similar to the above one in the lead-up to Rees-Zammit’s try against Scotland. A week earlier, George North receives the ball in the same scenario as Halaholo and unfortunately, North does nothing to fix Lowe or Ringrose on his line. He immediately just ships the ball along to Halfpenny. Had he attacked Lowe’s inside shoulder; fixing him, a pass to Rees-Zammit would have sent him on his way with acres to run into. That one decision alone, killed the overlap against Ireland because it allowed Lowe to just drift across, trust his inside man and cover a pass to Rees-Zammit with Keenan joining the defensive line well. Chance gone, and you would hope that a week later, internal training may have contributed to the improved decision taken by Halohalo.

In summing up, the above video footage sums up Wales Louis Rees-Zammit Six Nations to date. He is making the extremely difficult look easy. His acceleration and pace are phenomenal assets for the backline. Duhan Van Der Merwe is ferociously quick and one of the fastest wingers in Europe but, he has never looked more sluggish. Rees-Zammit blazes past him and seamlessly chips the ball over Stuart Hogg. Regathering and dotting down expertly to seal Wales’ win.

Indeed, all of the above examples are proof he is truly a new International superstar in the making.