ChocoPro #162 marks the season 9 finale of the Gatoh Move Pro Wrestling YouTube show. The season in question has been incredibly eventful, as it brought in a host of guest stars and pushed the show’s core team to its collective limit. With that said, this has been a unique season; up until now, season 9 didn’t see the Asia Dream Tag Team Championship defended. It would only make sense, then, for the purple belts of Gatoh Move to be on the line in the season finale. Here is what viewers should know heading into what may very well be the best episode of the season. 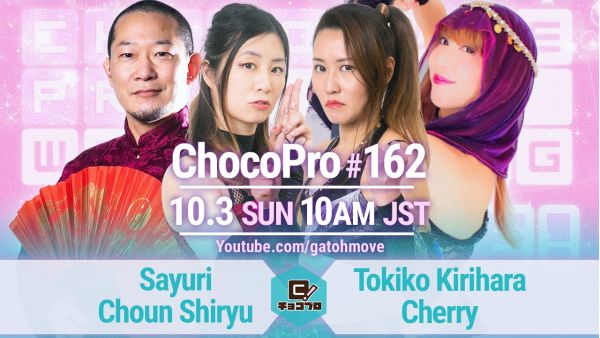 Kicking off the ChocoPro season 9 is tag team action. On the previous episode, Tokiko Kirihara and Cherry faced off in singles competition. Despite a heated, competitive encounter, this helped them become more familiar with one another, fostering a sense of teamwork. For the first time, they will team up and to say that they’re up against steep competition would be an understatement. Their opponents will be the collective force known as Dragon Ninja, comprised of Sayuri and Chon Shiryu. Dragon Ninja’s last match took place on ChocoPro #145 this past August, where they fell to Chie Koishikawa and Mei Suruga, also known as Warm Caterpillars. ChocoPro #162 is an opportunity for either team to end season 9 on a high note. Thus, expect them to give this match everything they have. 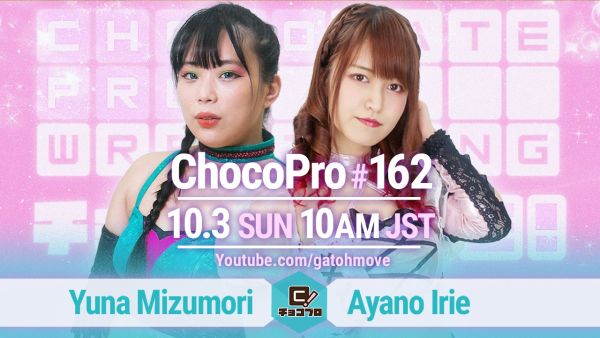 It’s a battle of the idols on ChocoPro #162, as Gatoh Move’s “Pineapple Girl” takes on Actwres girl’Z’s “Snow Princess.” On ChocoPro #160, Yuna Mizumori and Ayano Irie teamed up to take on Tokiko Kirihara and Kaori Yoneyama. Though the competition was formidable, the idol tandem emerged victorious. On the season 9 finale of ChocoPro, the idols will meet in singles competition. Based on wrestling styles alone, this will be a unique encounter. Mizumori’s wrestling style is heavily power-based, though her agility and nimbleness make her that much more formidable of a foe. Meanwhile, Irie’s approach is more methodical and her patented Dropkick to the Ear is a maneuver she never fails to keep on standby. Will Irie close out the season with a victory or will this match be “Yunamon’s” to win?

The reigning Asia Dream Tag Team Champions will head into their eighth title defense on ChocoPro #162. Best Bros‘ last title defense took place on ChocoPro #136, this past July, which saw them overcome TropiKawaild, SAKI and Yuna Mizumori; the latter team earned this opportunity by winning the first-ever One of a Kind Tag League. From there, Mei Suruga and Baliyan Akki continued to wrestle independently and as a team. However, it was when they joined forces that they proved themselves as perhaps the most dominant force in Gatoh Move. From RESET to TropiCalamari to Melt Brain Dancing, Best Bros overcame all challengers in their path. As ChocoPro season 9 reaches its conclusion, have the reigning champions met their match?

One of the teams set to challenge Best Bros are Egg Tarts, comprised of “Too Much Energy” Chie Koishikawa and her understated yet hard-hitting partner, Hagane Shinnou. They first teamed this past January, slowly becoming one of the show’s fan-favorite duos. In February, they unsuccessfully challenged Best Bros for the Asia Dream tag team titles. Despite this loss, Egg Tarts got the most out of the champions in a 26-minute-plus bout. On ChocoPro #160, the two teams faced off again, albeit in a non-title contest. This time, neither team won, as they reached the 20-minute time limit. Emi Sakura, who was watching the show from America, chimed in via YouTube chat. She declared that both teams would be involved in a three-way tag team match for the Asia Dream Tag Team Championship.

The third team involved, Masahiro Takanashi and Hoshitango, can best be described as a wildcard. Though they’ve only been teaming in ChocoPro for roughly a month, their history goes back to the mid-2000s. Their first encounters took place in DDT Pro-Wrestling, where they not only competed against one another but regularly teamed. During their time as a team, specifically within the walls of Ichigaya Chocolate Square, Takanashi and Hoshitango have been a proven force, blending the former’s technical savvy with the latter’s power and seemingly immovable presence. ChocoPro #162 could be their show, allowing them to wrap up the season with gold in their possession. Given the dominance of Best Bros and the hunger of Egg Tarts, this will be easier said than done.