Ice Ribbon returns to Korakuen Hall on September 18 for Princess Knights 2021. This show features four title matches. Here’s what to know about the action to come. 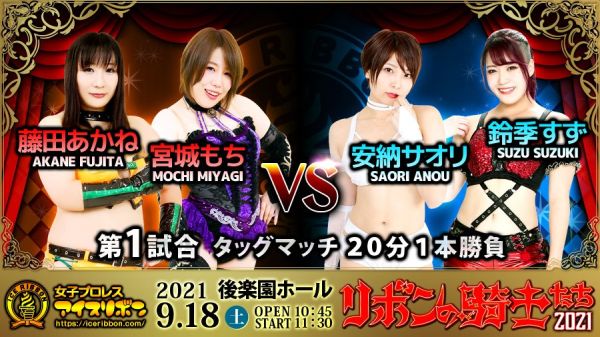 Princess Knights 2021 kicks off with a huge tag match. For the first time in a while, Akane Fujita and Mochi Miyagi team up again as a part of the Frank Sisters. Fujita has been busy in singles action, recently challenging Tsukasa Fujimoto for the ICExInfinity Championship and repeatedly fighting with Risa Sera for the FantastICE Championship. Miyagi has been busy with tag matches, but she works great with Fujita when given the chance. As for their opponents, Saori Anou only recently returned after a spinal injury, but she picked up a win with Suzu Suzuki, where they beat Miyagi. It seems if Anou and Suzuki can get a win, they’ll be the next challengers for the International Ribbon Tag Team Championship. 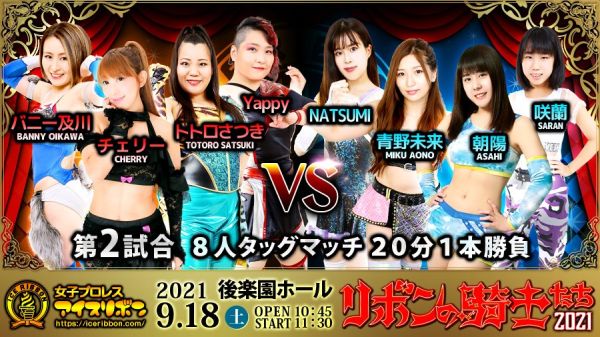 The P’s Party group rejoins once again for an eight-woman tag match. The last time this group got together resulted in a fun, refreshing addition to what was a stacked card. These matches usually get the lesser experienced wrestlers in with a few veterans of the ring. Thus, the relative rookies gain more confidence toward singles contests. Nothing too crazy should be expected from these types of matches, but they make for easy watches as shows become more intense. 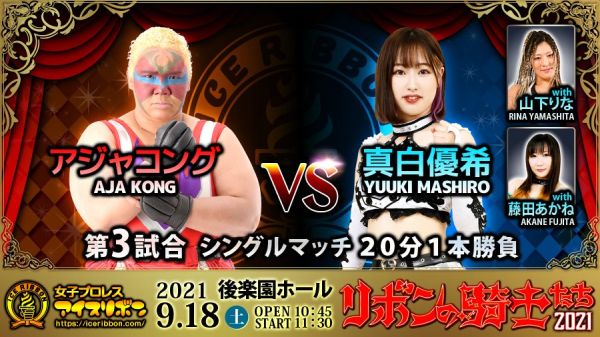 Aja Kong returns to Ice Ribbon to take on the leader of the Gacha Kingdom, Yuuki Mashiro. However, Mashiro won’t be completely alone against the joshi legend, as she will be flanked by her teammates, Rina Yamashita and Akane Fujita, two people anyone would want to have in their corner. There isn’t much to expect from this match apart from Mashiro trying to get the upper hand with her wild tactics, but it more than likely won’t be enough to take down the presence of Aja Kong. 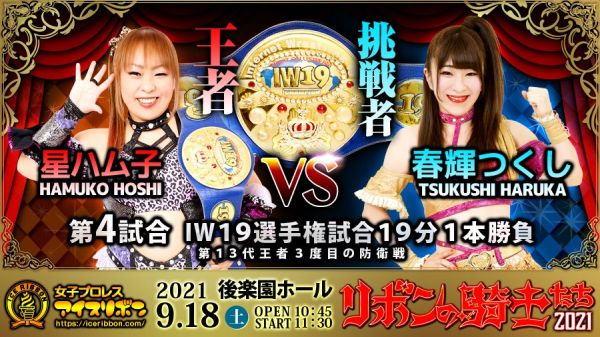 Hamuko Hoshi won the IW-19 title for the third time by defeating Totoro Satsuki at Korakuen Hall last month. Not long after Hoshi won the title, Tsukushi Haruka came out and dropkicked her, demanding another shot at the title. Since the title was reintroduced to Ice Ribbon last year during the Covid era dojo shows, the title has been going back and forth between the two, which has made for quite an exciting feud as both women can put on great matches. However, since this is her first defense as the champion again, hopefully, Hoshi will be able to keep the title, especially as her daughter, Ibuki Hoshi, has already shown interest in defeating her. 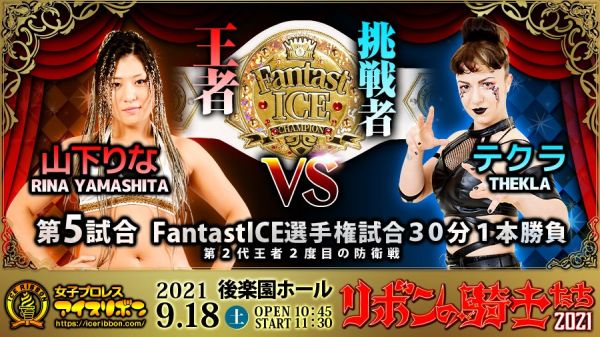 As expected, after Rina Yamashita defeated Suzu Suzuki in a brutal deathmatch to keep the championship she won from Suzuki’s partner and mentor Risa Sera, Thekla came out to challenge for the title. However, there has yet to be a stipulation announced for this match, which isn’t unusual for the title itself. These two are known to be quite chaotic, which was a running theme for what Sera did with the title. There’s no doubt that Yamashita will remain the champion at the end of the match, but this could easily be the match of the night with the amount of talent featured. 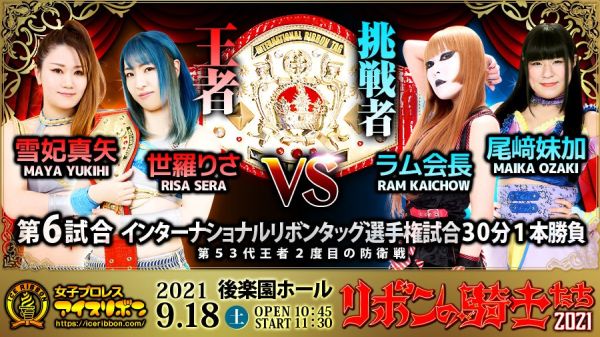 For Azure Revolution’s second defense on their route to becoming the best tag champions in Ice Ribbon, they face RebelxEnemy‘s Ram Kaichow and Maika Ozaki. Ozaki and Maya Yukihi were previously tag champions and had an excellent run together, so it will be interesting to see what happens when they are put on opposite sides of the ring. Ice Ribbon clearly have a lot of faith in RebelxEnemy, as they remain a unit despite Yukihi being reunited with Risa Sera. Since Yukihi has so much history with Kaichow and Ozaki, this will certainly make for an exciting tag team match. Nonetheless, it seems like Azure Revolution will pick up the win.

Tsukasa goes for defense number nine before heading off to Mexico on an excursion and it’s against the young Ibuki Hoshi. Young Ibuki challenged for the ICExInfinity Championship at the last Korakuen show in quite a surprising turn of events. Hoshi has yet to win a title in Ice Ribbon since debuting back in 2017, so it would be a huge victory for her to capture her first title this way. Beating Fujimoto, in theory, is fine but actually doing so is where it gets tough.

The champion built herself as the ace of Ice Ribbon and her seventh legendary reign as ICExInfinity Champion has easily positioned her as the top woman in wrestling right now. Even if Hoshi doesn’t win, this will set her to that next level that she needs to continue climbing the ladder at Ice Ribbon. Don’t miss Fujimoto getting another win under her belt at Princess Knights 2021.