Ice Ribbon continues to grow as a company throughout 2021 and this show is an indicator of their success this year. For the first time ever, they will be running the Yokohama Budokan on August 9 with four title matches, including the International Ribbon Tag Team Champions defending their titles before squaring off in the main event. Here’s what to know about the Ice Ribbon Yokohama Budokan event. 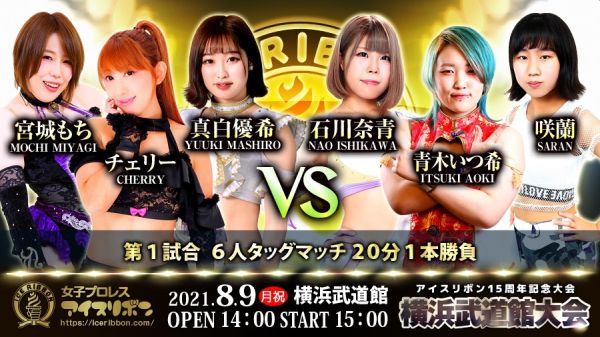 Kicking off the Ice Ribbon Yokohama Budokan show is a six-woman tag team featuring two veterans and some of the young up-and-comers on the roster. “The Gacha King,” Yuuki Mashiro, teams up with Cherry and Mochi Miyagi, the two women who serve as the senior members of the match. On the other side is Itsuki Aoki, who returns to the main Ice Ribbon show for the first time since March. Her partners are Nao Ishikawa, who recently returned from injury, and Ice Ribbon’s young rookie, Saran. This is going to be a match to let the rookies work with the more established talent in the company. 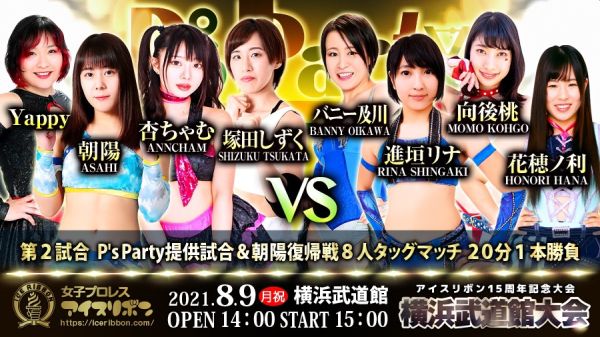 The P’s Party regulars come together for a big eight-woman tag match at the Ice Ribbon Yokohama Budokan show. The big news from this match is Asahi‘s return to the ring for the first time in almost a year, so it will be interesting to see how she bounces back. Currently, the women who appear on P’s Party are fighting for the chance to go on an excursion to Mexico to help boost their skills and career prospects. This will be a fun match to see how the future of Ice Ribbon looks. 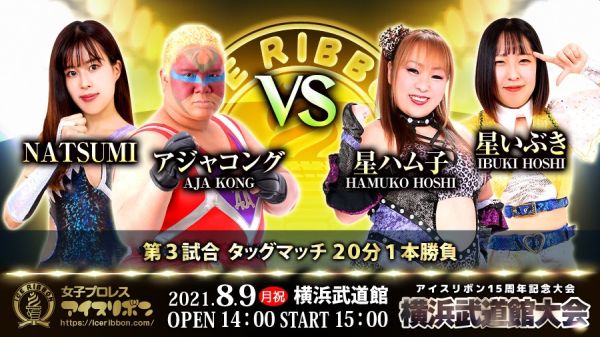 Natsumi and Aja Kong vs Hamuko Hoshi and Ibuki Hoshi

Aja Kong makes her return to Ice Ribbon alongside the wrestler she has been training, Natsumi. Natsumi has impressed with her matches in home promotion Pro Wrestling Zero1 since debuting. They’re facing the mother-daughter duo of Hamuko and Ibuki Hoshi. Hamuko Hoshi recently won back the IW-19 Championship from Tsukushi Haruka, proving that she is still a good hand to the company for all her years of loyalty. This will probably focus on Natsumi and Ibuki throughout the duration, but it will take a lot to beat the legend Aja Kong. 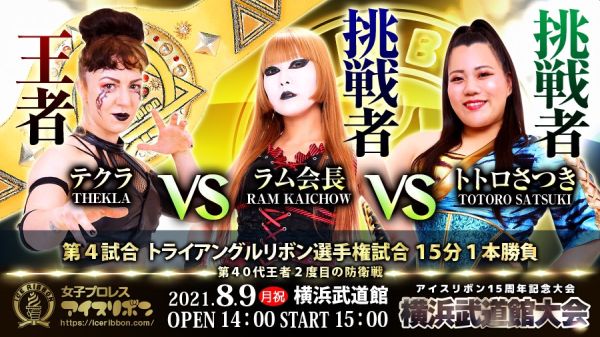 Thekla defends her Triangle Ribbon Championship for the second time since winning it back in May. Thekla has stepped up since returning to Japan and even has fans calling her the “Top Gaijin,” which is certainly deserved. However, she has a tough task against former champion Ram Kaichow and Totoro Satsuki. Satsuki herself lost to Thekla in a singles match. However, Kaichow and Satsuki managed to pick up a victory over Thekla in a six-person tag match. It seems likely that Thekla will retain and continue the popular run she has been having as of late, but this could easily be a great match that flies under the radar. 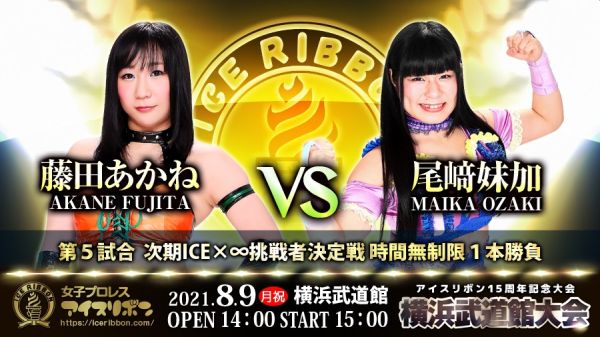 Number One Contender Match for the ICExInfinity Championship: Akane Fujita vs Maika Ozaki

There always needs to be someone in line for the championship so it comes down to Akane Fujita and Maika Ozaki fighting for their chance at the top prize. These women have quite the credibility to go after whoever is the champion at the end of the show. Ozaki has been excelling as a tag wrestler alongside Maya Yukihi and the rest of Rebel x Enemy, so this will be a true test for her moving forward. Fujita is no easy opponent; she has spent a lot of her time in Ice Ribbon the past year chasing after Risa Sera while she was FantastICE Champion, and even though she didn’t win, Fujita showed that she could hang with Sera at her own game in hardcore matches. It does seem that Fujita might be able to get the edge towards victory but this will be an exciting match-up. 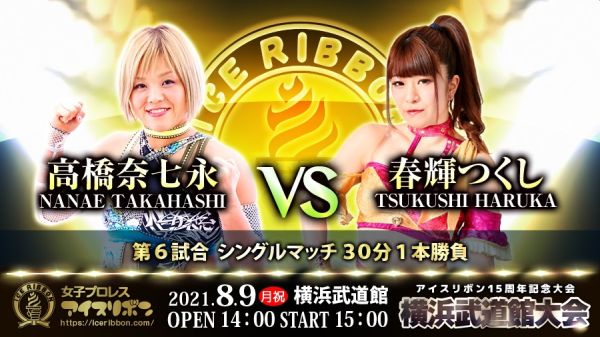 In the run-up to this big match, Tsukushi Haruka has been posting the polaroid photos she’s taken with Nanae Takanashi from when she was younger, adding some context to their contest. Despite Nanae marking her 25th anniversary, she is yet to slow down at all in the ring in terms of match quality. Going against someone on Haruka’s level is going to be a great clash of styles that doesn’t come often to Ice Ribbon. As IW-19 Champion, Haruka spent a lot of time defending the title on P’s Party, the Ice Ribbon show she produces. Since dropping the title, this opens Haruka up to more matches like this. This match would be the main event on any card and it’s undoubtedly going to be Match of the Year worthy. 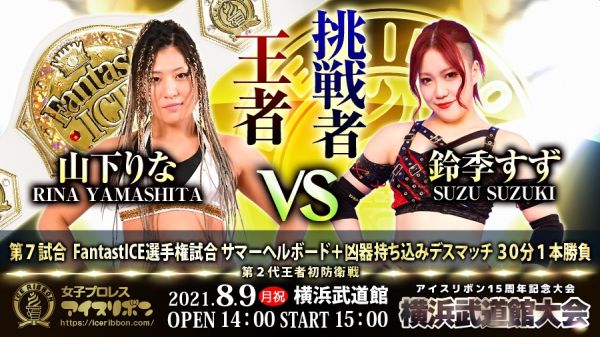 Rina Yamashita has her first defense set against the wrestling prodigy Suzu Suzuki. Yamashita defeated Sera in June to capture the newest championship in Ice Ribbon in a brutal light tube deathmatch. It would only be fitting that Sera’s first opponent was Suzuki. Recently, Suzuki finished her seven-match series when she challenged Yamashita to a deathmatch. Despite not winning at all during the series, Suzuki slowly built herself as someone that earned the respect of the most feared men in deathmatch wrestling. With Yamashita being someone that goes toe to toe with the likes of Jun Kasai and Masashi Takeda in Pro Wrestling FREEDOMS, this is going to be one bloody affair. It seems unlikely that Yamashita will lose in her first defense, but who knows what sort of weapons are going to be brought out that could turn the tides? 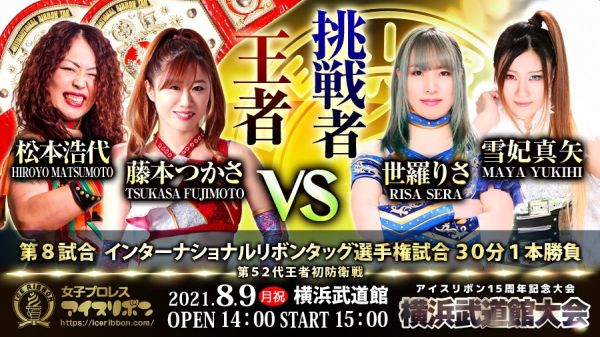 When the International Ribbon Tag Team titles were vacated after Hiragi Kurumi announced her injury, her partner Hiroyo Matsumoto picked up the title with Tsukasa Fujimoto after defeating Maya Yukihi and Maika Ozaki and Akane Fujita and Risa Sera in a three-way match. After the match ended, former partners Sera and Yukihi decided to reunite as Azure Revolution to chase the champions. Azure Revolution are 3x tag team titleholders in the six years they have been teaming and are arguably one of the top tag teams in the company. However, no matter how much experience they have as a team, it is going to be hard to take down the ace Fujimoto. This match will be a fantastic showcase of the best the company has to offer in terms of tag matches. It’s too close to call who will walk out as champions.

Whether they retain or lose the International Ribbon Tag Team titles, it doesn’t matter in the main event. Partners turn to opponents to close out Ice Ribbon’s debut in the Budokan and it wouldn’t be Ice Ribbon’s biggest show ever without the “ace” taking on one of the biggest freelance names in Hiroyo Matsumoto. Since taking the championship away from Suzu Suzuki in January, Tsukasa Fujimoto has defended the title six times and every match has been the highlight of the show. Going against someone on the level as the internationally recognized “Lady Destroyer,” it’s going to have all the potential to blow those matches out of the water. Wherever Matsumoto shows up, she puts on a show and this is going to be no different. This is not one to be missed even if it does seem likely that Fujimoto will stay champion.