ChocoPro #121 will be an episode of celebration, marking the three-year wrestling anniversary of Mei Suruga. Gatoh Move Pro Wrestling‘s “Apple Girl” made her official in-ring debut on May 27, 2018, facing her mentor, Emi Sakura. Since then, Suruga has gone on to become one of Gatoh Move’s fastest rising stars, building her own brand of offense that features agility and cunning alike. In the vast space of joshi puroresu, there’s no one quite like “Mei-chan.”

Currently, Mei Suruga is one of the top joshi stars, period. Though she has made appearances on AEW programming, not to mention become a consistent player for Tokyo Joshi Pro Wrestling, ChocoPro remains her home. She is also one-half of the Asia Dream Tag Team Champions for Gatoh Move, as well as Princess Tag Team Champions for TJPW. On this upcoming episode of ChocoPro, she will battle an old ally and rival who has made waves in her own right. Here’s what to expect on this celebratory episode.

Opening ChocoPro #121 will be a showdown between Gatoh Move’s “Pineapple Girl” and the leader of Pencil Army. On the previous episode of ChocoPro, the Pencil Army trio took on Yuna Mizumori, VENY, otherwise known as ASUKA, and Chris Brookes in the show’s sole match. It saw Brookes, who was formerly a Pencil Army member, submit Lulu Pencil. Post-match, a coldhearted Brookes verbally ran down the group, even telling Lulu Pencil she didn’t belong in wrestling. On ChocoPro #121, she has a chance to prove him, as well as all other naysayers, wrong. However, to do so, she will have to overcome Yunamon, who will be nothing short of a challenge for the Gatoh Move star that has yet to rack up a singles victory. 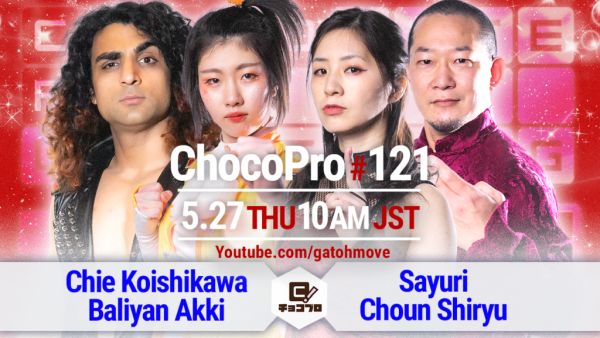 Chie Koishikawa and Baliyan Akki vs. Sayuri and Chon Shiryu

The second match of ChocoPro #121 sees Sayuri and Chon Shiryu, the “Kunoichi” and “Dragon” respectively, reunite to battle the duo of Chie Koishikawa and Baliyan Akki. The last time Sayuri and Shiryu teamed up was on Day 2 of ChocoPro #100, where they fell to Egg Tarts, the team of Koishikawa and Hagane Shinnou. Needless to say, the martial arts team will be looking to pick up a victory. To do so, they’ll have to overcome Koishikawa and Baliyan Akki, the latter being one-half of the Asia Dream Tag Team Champions. This makeshift team has the makings of a true threat, combining Koishikawa’s energetic offense with Akki’s fast-paced approach. Expect this tag team encounter to be nothing short of competitive. 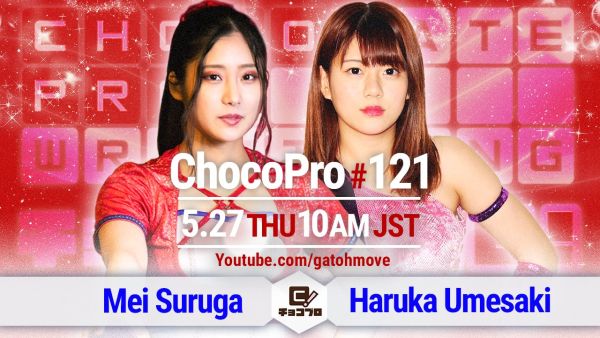 In the featured match of ChocoPro #121, two former allies and rivals will reunite. For long-time fans of Gatoh Move Pro Wrestling, Mei Suruga requires no introduction. Simply put, she is one of the most popular stars that the promotion has produced. From her earliest days in the promotion, dating back to the late 2010s, to her current status as one of its top stars, the journey of the mischievous “Apple Girl” has been one to behold. She will enter ChocoPro #121 as not only one-half of the Asia Dream Tag Team Champions but prepared to battle a fellow tag team titleholder in her own right.

Making her ChocoPro debut will be Haruka Umesaki. She began her professional wrestling career in 2019, learning under Sakura, Kaoru Ito, and Sareee, the latter best known to NXT fans as Sarray. Umesaki debuted for World Woman Pro Wrestling Diana, which remains her home promotion to this day. She first faced Suruga at a Gatoh Move event in July of that year. By this point, Suruga was well within one year of her career. Despite Umesaki’s best efforts, this was Suruga’s match to win. Umesaki and Suruga would have a few encounters where they would both face off and join forces.

Since then, Umesaki has enjoyed success in her own right. She is a two-time Diana Tag Team Champion alongside Miyuki Takase; together, they are known as Luminous. With that said, since 2019, Umesaki has yet to step foot into Gatoh Move. It’s appropriate, then, that she will make her return to the promotion, as well as debut for ChocoPro, to face off against an individual she shares history with. Given the experience these competitors gained since their respective debuts, this will be a main event worth keeping your sights on.