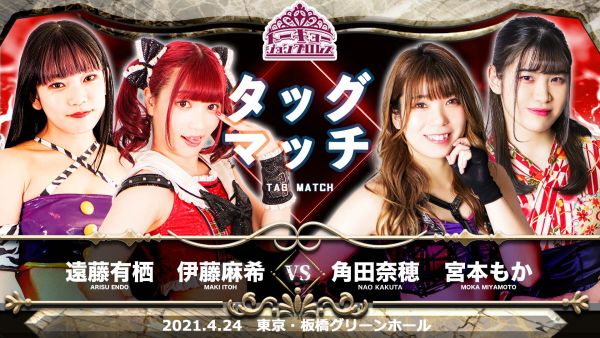 The team of Maki Itoh and Arisu Endo get some tag team practice together ahead of their match against Miu Watanabe and new signee Yuki Arai from the idol group SKE48. At the last show, Itoh missed out on winning the top prize against Rika Tatsumi after a hard-fought battle. Not much can keep the fallen idol down, so expect “Itoh-chan’s” typical tricks. Despite Itoh’s efforts, Endo was reluctant to fall to her bad influence during the press conference, but maybe she will change her mind in the match.

On the other side of the ring is Nao Kakuta and Moka Miyamoto. Although Miyamoto has not done much of note, she has been given the chance to wrestle in more singles matches, including against Itoh. Kakuta lost to Yuki Kamifuku during their International Princess Championship match at the previous show. While it wasn’t the best match on the card, Kakuta seems to do better in tag matches rather than singles encounters. Since their big tag is coming up, Itoh and Endo will more than likely get the win at this TJPW Spring Tour ’21 ~The Bullet~ event.

Recently, TJPW has been putting on triple threat matches, which is an odd format for most companies in Japan. However, it has given a unique spin to the card. Toward the start of April, Mahiro Kiryu and Hyper Misao had a failed attempt as a tag team, losing to the BAKURETSU Sisters. In a match like this, though, they could very well team up on Pom Harajuku to take her out. Both Harajuku and Kiryu have yet to pick up any significant wins as they’re still progressing through the TJPW ranks. Nonetheless, they will gain good experience against Misao and her antics. Misao has previously won a three-way involving Haruna Neko and Marika Kobashi, so it’s more than likely she will seize another victory here. 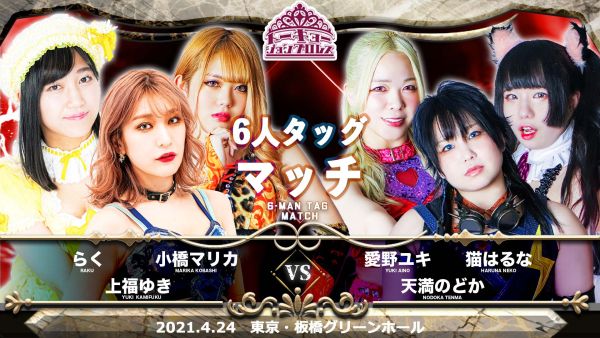 Nodoka Tenma and Yuki Aino have their first match since losing their Princess Tag Team Titles to NEO Biishiki-Gun and will team up with Haruna Neko. While they lost their tag titles, Tenma and Aino put up a good fight. During key parts of the match, it looked like there was a possibility they would keep the title. However, Mei Saint-Michel and Sakisama were just too sneaky for them to keep up.

However, taking on the International Princess Champion, Yuki Kamifuku, the former champions have a good chance to get the ball rolling again. Haruna Neko went up against Kamiyu during the All-English show, That’s J-PW, in a losing effort so their cat and dog feud could continue. Both Kobashi and Raku picked up wins in tag matches at Still Incomplete, so they certainly have a good run of momentum heading into the match. With Kamiyu being in this match, there is a higher chance her team might win. 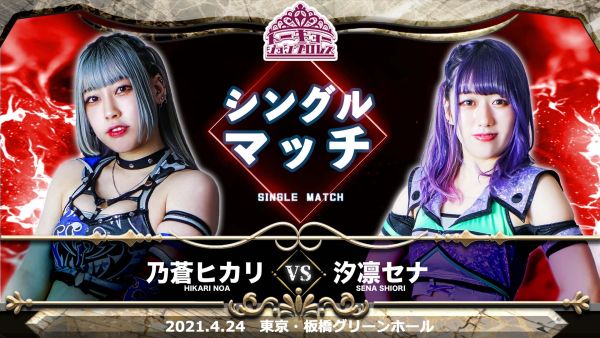 This match signifies Sena Shiori’s final match before she graduates from TJPW, taking a break to focus on the treatment for her illness. Throughout Shiori’s short career, her opponent, tag partner, and best friend, Hikari Noa, has been right there with her. It only seems right that Shiori leaves TJPW against someone she’s close to. Despite her announcement, Shiori is hopeful that she will eventually return, insisting that this isn’t going to be goodbye forever.

Noa has been having a string of great matches, stepping up to the plate and cementing herself as one of the top talents in the company when it comes to in-ring work. While Shiori has only just started to pick up the pace, with all the chemistry they have as tag partners, there’s a big chance that this match will more than likely be the best one Shiori has had in her career. No matter who walks away as the victor, Shiori hopes to put a smile on the faces of her fans at the TJPW Spring Tour ’21 ~The Bullet~ event. 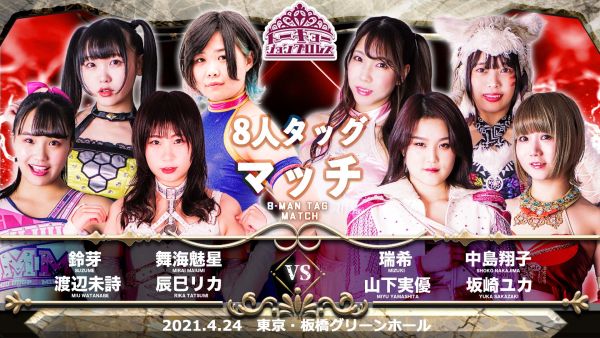 TJPW Spring Tour ’21 ~The Bullet~ concludes with a huge eight-woman tag team match, previewing Rika Tatsumi’s Princess of Princess Championship defense as Miyu Yamashita stands across the ring from her. After Tatsumi defeated Maki Itoh, retaining her title, Itoh’s tag partner, Miyu Yamashita, came out to challenge the champion. Yamashita didn’t want to wait until Cyberfight Festival, however, so the match is set for the beginning of May. After the brutal slaps from Tatsumi, Yamashita will be looking to deliver devastating kicks that seem to go viral every time she has a match.

Yamashita has quite the strong team on her side, including three of TJPW’s best in Yuka Sakazaki, Mizuki, and Shoko Nakajima. Despite not being the main focus of the show, all three continue to be some of the best wrestlers in the company, always making for fun, exciting matches. On Tatsumi’s side is her usual tag partner Miu Watanabe, who has been doing well alongside her Up Up Girls teammates as well as with Tatsumi herself as they went far during the Max Heart Tournament. As for Mirai Maiumi and Suzume, having swiftly challenged NEO Biishiki-gun’s Princess Tag Team Titles immediately after they beat the BAKURETSU Sisters, they have been working excellently as a team as of late. Getting a win and showing what they can do in this match will be vital.