Six matches down and one more to go. It all comes down to this for the ladies in the US. Tonight we see the Finals of the USA bracket. After all the grueling matches and amazing contests, fans will finally see the conclusion of the AEW Women’s World Championship Eliminator tournament US bracket. Hikaru Shida has been patiently waiting for her opponent to be named at Revolution and fans are also very much curious who she will face at the event. Whatever happens tonight, the tournament is on its last few matches and nobody should not dare miss any of the action. Youtube is the place to be for your Women’s Eliminator Tournament needs so let’s breakdown the final match on the West side of the bracket. 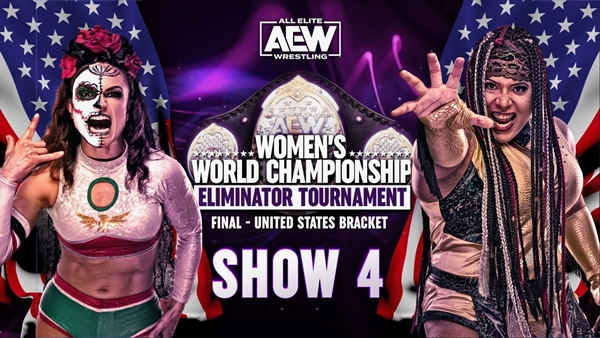 After an exhilarating match with Riho, Thunder Rosa will be looking to closeout and advance to the Finals proper. But “The Native Beast” Nyla Rose might just have something to say about that. Both women have been unbelievably dominant throughout the tournament. Now they battle it out to see who faces Ryo Mizunami for a shot Hikaru Shida’s AEW Women’s Championship. Rosa has defeated the likes of Legit Leyla Hirsch and the returning Japanese star Riho. Not to be outdone, Rose has bulldozed her way against competitors such as Tay Conti and Dr. Britt Baker, D.M.D thus setting up the showdown between her and Thunder Rosa.

Nyla Rose has the power advantage in this one and will utilize that to end Thunder Rosa’s Finals dreams. But anyone who counts out Thunder Rosa will be in for a fight. As “La Mera Mera” backs down from no one, not even a mastodon such as Nyla. Both women will fight tooth and nail to secure a date with destiny at Revolution. But whoever wins will have to fight the final boss in the form of Ryo Mizunami. Ryo dispatched fan-favorite Maki Itoh in what was the first of her impressive victories in this tournament. Mizunami defeated the legendary Aja Kong in her first career win against the icon. In the process of securing a Japan Finals birth. Riding a wave of momentum she would defeat Joshi’s “Magical Girl” Yuka Sakazaki to march into the true Finals of the tournament.

Ryo Mizunami bows to no one. Ryo will definitely be Shida’s toughest test to date if she manages to come out victorious in the Eliminator tournament. Thunder Rosa and Nyla Rose will definitely give it their all but they should keep it in the back of their minds that things aren’t quite over yet. Ryo will be waiting for whoever wins this major collision and she will not be holding back. Will Thunder Rosa’s unorthodox style net her a win or will Nyla Rose overpower the Mexican-born superstar and advance to meet Mizunami in a battle of the titans? Tune in to find out!