A late caution at Charlotte Motor Speedway turned a ho-hum NASCAR Playoffs elimination race into a chaotic dash to the finish that Christopher Bell took advantage of to advance to the Round of 8.

After bad runs at Texas and Talladega, Christopher Bell entered Charlotte outside, looking in. As the laps ticked down in the Bank of America ROVAL 400, Chase Elliott pulled away from the field. Bell sat in seventh, over 20 seconds back, on old tires.

Bell needed a caution to have a fighting chance. With six laps to go, he got one.

The reason for the caution. #NASCARPlayoffs

Even though tires didn’t mean much, Sunday, at Charlotte, Bell led most of the field down pit road for tires.

“I knew that everyone else that didn’t have stickers, I knew what they were fighting,” he said. “I knew I had a really big advantage. It was just going to be a matter if I could make it through the field clean and not get wrecked and not get run off course.”

Back to green with three laps to go, chaos happened. A lot of contact and desperation sent Noah Gragson spinning into the Turn 1 barrier and Michael McDowell side-swiping the wall. Bell snuck right through it.

“When I got into Turn 1, my spotter did an amazing job,” he said. “They all started wrecking. He told me to stay tight to the middle, and that kept me out of all the junk in Turn 1.”

But it didn’t stop there. Further down the track, AJ Allmendinger traded paint with Elliott and pushed him off the track in Turn 3. Then in Turn 4, Kevin Harvick nudged Allmendinger out of the way to take it for himself. Rounding Turn 6, Tyler Reddick turned Elliott and spun him through the grass.

Through all of that, Bell climbed his way up to third. With two to go, Bell reeled in Reddick and overtook him heading onto the banking just as the caution flew and forced overtime. Which Bell didn’t want, because he thought he had better odds running it out under green.

“Yeah, just because restarts are so hectic and crazy here at the Roval,” he said. “We see so many pileups getting into Turn 1. I knew I had a big advantage, regardless if it went green or there was a yellow and I was restarting on the front row. I knew that I had the advantage.” 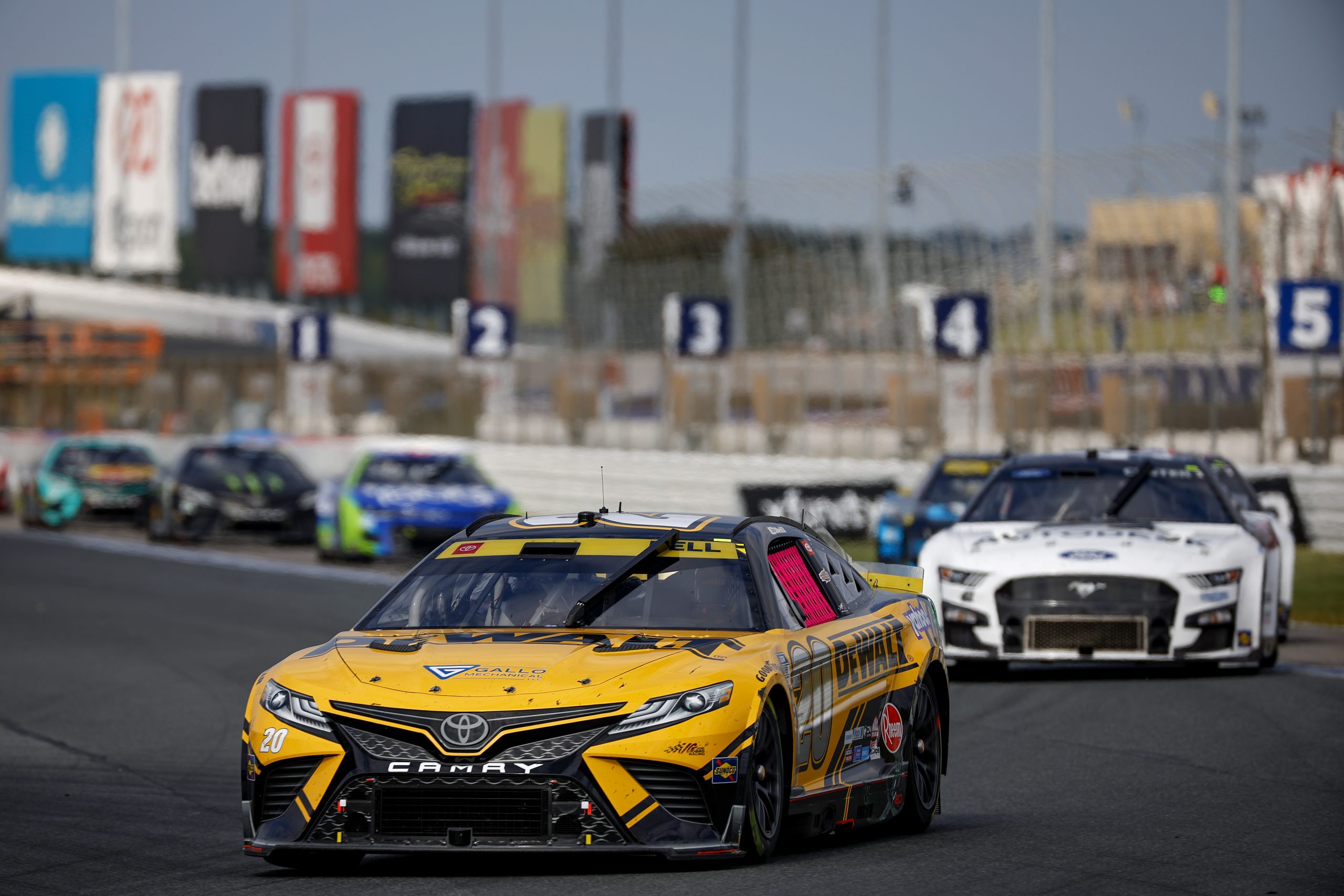 Regardless, Bell powered by Harvick somewhere between Turns 2 and 3 (NBC’s broadcast missed the winning overtake, due to a six-car wreck in Turn 1) and drove away to victory at Charlotte Motor Speedway.

“Really proud of everyone on this DeWalt team,” he said. “They deserve it, man. We’ve been trying so hard to get DeWalt in Victory Lane. We finally got this Camry here.”

Now the focus turns to the Round of 8, and Christopher Bell feels “extremely good” about his chances.

“This whole last two weeks, I had been extremely deflated, just kind of down in the dumps. Now I can promise you I’m as excited as ever heading into these next three races.”

Chaos, thy name is NASCAR.