Max Verstappen is favored, but can some Monza magic deliver another surprise this weekend?

Death, taxes, and Max Verstappen on the top step of the podium. That has been the trend in Formula One in 2022.

Verstappen rides into Monza this weekend on a four-race winning streak, seemingly invincible having overcome every obstacle thrown his way in recent weekends. Starting 10th? No problem. How about starting 14th? Unfazed. FP1 mechanical issue, late safety cars, on-track battles, and tire differences? Yeah, he’s got that handled too.

Whether you believe his opponents have been up to the task or not, no one can deny Verstappen is in the best form of his career. The man who finally brought an end to the Mercedes dynasty looks set to create one of his own. With a driver operating at that level plus the most dominant car on the grid, it’s nearly unbeatable.

Max’s championship lead has ballooned to 109 points after Zandvoort, with Charles Leclerc and Sergio Perez tied for a distant second place. Everything seems to be going his way as of late, so when may things finally change? Monza just might be the track to do it.

This will be Max’s first true shot at the Italian GP in the clear best car on the grid. Last year, though he started ahead of both the Silver Arrows, Mercedes had the top speed advantage over Red Bull. Then, as we all know, one bad pit stop later, he was out of the pits next to Lewis Hamilton and both were out of the race in dramatic fashion.

Though it’s hard to bet against Max at this stage consider this: his best career finish at Monza is 5th, and he’s had two DNFs in a row. Last year it was the aforementioned crash with Hamilton, and in 2020 an engine failure ended his Sunday early. Monza is typically tough for Max, and though you can’t lean too hard on history, you can’t ignore it either.

I wouldn’t be surprised if Verstappen rode off into the distance for another comfortable victory this weekend. Though at a track whose two most recent winners are Pierre Gasly and Daniel Ricciardo, in cars that finished seventh and fourth in the constructor’s standings respectively, never rule out some unexpected results.

The Autodromo Nazionale di Monza, also known as the “Temple of Speed,” has hosted more F1 races than any other track. The F1 Italian Grand Prix has been held at Monza every year but one since 1950 (there was no race in 1980 due to track updates). Though it has added some chicanes and shed the NASCAR-like banked oval since its first race in 1950, the circuit remains largely the same. 80% of the lap is at full throttle, and with several long straights, one mistake in the tight corners can cost drivers loads of time.

A Lap of Monza

Going through a lap, drivers will start along the 1.1 km (0.68 mi) long start/finish straight and prepare for the hardest braking on the calendar. The first chicane at Monza is especially tight. This makes for some Turn 1 antics and a high potential for contact like we saw with Max and Lewis in 2021. It’s also the best overtaking spot on the track, testing the drivers’ bravery on the brakes. After the slow first chicane, it’s the long, but flat-out Turn 3 known as the Curva Grande.

Coming out of Turn 3 the drivers hit another hard braking zone into the Della Roggia chicane, though it’s a bit faster and more technical than the first. Quickly, the drivers face two right-handed corners known as the Lesmos. Turn 6 is Lesmo One and Turn 7 is Lesmo Two. It’s critical to hit the second Lesmo right as the second DRS zone is on the ensuing straight.

As the drivers turn on the DRS and head down the straight, they next meet the highest speed chicane, the Ascari chicane. It’s a corner that tests both the precision of the drivers and the downforce of the cars and watching the cars go through it is mesmerizing. Finally, it’s on to the back straight and then to the final corner, Curva Alboreto (formerly Parabolica). Alboreto is a long right back to the main straight where you’ll likely see a lot of track limits violations this weekend. Drivers typically push to use as much of the road as possible to gain time heading back to the line. 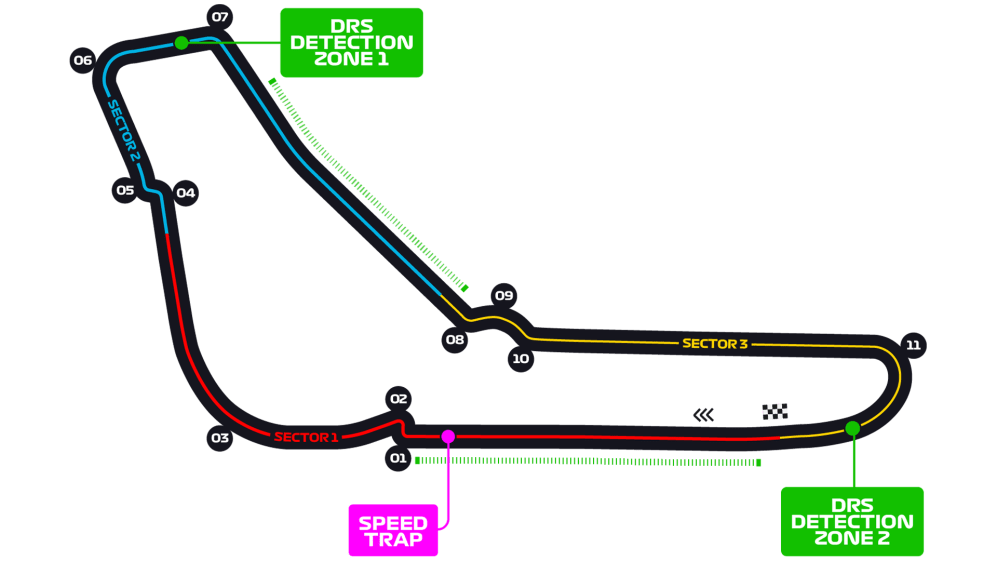 I think there will be some unexpected results at Monza this weekend. I don’t however think it’ll be enough to bring down Max Verstappen. The win streak continues for the championship leader.

How To Watch – F1 at Monza (United States TV Schedule, All Times EST)

READ ON: F1: 5 Takeaways From the Dutch Grand Prix