The fourth-ranked player and third-ranked defensive end in the country, Jack Sawyer, has already joined the Buckeyes. Tuimoloau will join Sawyer and the rest of the 2021 Ohio State recruiting class.

After months of waiting, Tuimoloau finally visited Ohio State’s campus–the last thing he needed to do before committing.

Tuimoloau was the third-ranked recruit in the country by 247Sports Composite. Further, he was the second-ranked strong-side defensive end in the nation and the top player out of the state of Washington. MaxPreps named him the Pre-Season First-Team All-American and he was added to the Polynesian Bowl Roster.

Ohio State had to battle with Washington for Tuimoloau, a Sammamish, Washington native. Tuimoloau went to Eastside Catholic High School, which is only 19 miles from Washington’s campus.

Tuimoloau also had offers from Alabama, Texas A&M, Oklahoma, and Michigan. He planned to visit Alabama in June, but cancelled his visit to Tuscaloosa the week after his Columbus visit.

Tuimoloau is six-foot-four-and-a-half-inches and 277 lbs but is still athletic and nimble. Analysts even believe he can drop into coverage and cover running backs and tight ends. He even has good enough ball skills that he could have been a top prospect at tight end. As a basketball player, he averaged close to a double-double in his high school career. At 277, both his size and athleticism are top-notch.

He is listed as a defensive end, but he has also played safety. His positional versatility would allow him to play at various spots on Ohio State’s defense.

Ohio State landed both Tuimoloau and Sawyer, who differ by only one one-hundredth of a point in 247Sports’ rankings. They can join the likes of Chase Young, Nick Bosa, and Joey Bosa in the Ohio State record books. 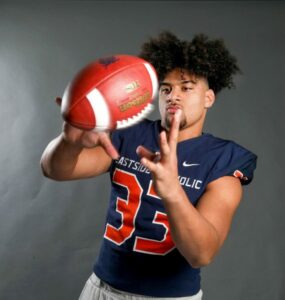