Mississippi State won the Armed Forces Bowl, but the game was overshadowed by a brawl at the end of the game. The Bulldogs beat Tulsa 28-26 on Thursday without utilizing Mike Leach’s Air Raid offense. The weather made the Mississippi State offense run the ball against Tulsa and it worked.

How did Mississippi State beat Tulsa after having a disappointing season? The Bulldogs ran the football and won the turnover battle. Two things that viewers might not have been expecting when the game started. The Bulldog defense entered this game with eight interceptions on the season and Tulsa quarterback Zach Smith ironically had thrown the same amount during the 2020 season. In the Armed Forces Bowl preview, we stated that this game would be close and come down to defense. That is exactly what occurred.

If you look at the stat line from the Armed Forces Bowl all things, besides the score, point to Tulsa getting the win. Tulsa outgained Mississippi State in total yards 484 to 271. In addition, Tulsa had 11 more first downs and won the time of possession battle by about three minutes. However, the Bulldogs won the turnover battle. Tulsa’s Smith threw two interceptions in the rain and wind. In the third quarter, Smith threw a 90-yard pick-six to Emmanuel Forbes. Forbes led the Mississippi State defense during the regular season with four interceptions, two were returned for a touchdown.

Smith then threw another interception on third-and-goal in the fourth quarter. The second ball was intercepted by Tyrus Wheat.  This was Wheat’s first interception of the season. Mississippi State could not capitalize on this takeaway and gave Tulsa the ball back with just under three minutes to play. Smith was able to drive downfield and get a touchdown to come within two, but that was it for the Golden Hurricane.

Leach is known for his affinity for the passing attack. Coming into the Armed Forces Bowl 17 different players had a reception on the season and the rushing attack was merely second fiddle. This was not the case on Thursday. The Bulldogs had an equal amount of rushing attempts as passing attempts with 30. Jo’Quavious Marks got the game started with a 28-yard rushing touchdown. Then, quarterback, Will Rogers, added another rushing touchdown in the third quarter. The freshman running back, Marks, had a season-high 72 rushing yards on 11 attempts on Thursday. This was only the second time this season that Marks had over 40 rushing yards on more than 10 carries. In addition, freshman quarterback Rogers got his first rushing touchdown this season.

On paper, this game should not have been close. The SEC against the American Athletic Conference. However, Tulsa held its own against a Mississippi State team that was finally healthy after struggling all season. Tulsa did not do what was needed to win this game. The Golden Hurricane didn’t protect the football and that proved costly. Finally, the game was overshadowed by a game-ending brawl. Both teams will likely feel the repercussions from that at the beginning of next season.

Order has been restored. Not the case a few minutes ago. pic.twitter.com/HaTpOo2pO5 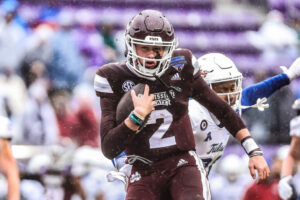