Ohio State gets five-star running back TreVeyon Henderson during the 2020 Early Signing Period.

Henderson is the 24th-ranked recruit in the 2021 class by 247Sports Composite. He is the top-ranked running back in the country and the second-ranked recruit out of Virginia.

At five-foot-eleven-inches and 195 pounds, Henderson committed to Ohio State on March 27th, 2020. He turned down offers from Alabama, Clemson, Florida, and Michigan in favor of the Buckeyes.

Ohio State is getting a home run hitter with Henderson. He scored 45 rushing touchdowns his junior year on 198 attempts. That averages out to almost one touchdown every four attempts.

Henderson is a smooth, east-west runner who can make all 11 defenders miss. Once he finds a hole, he turns on the jets and goes to the house. He also ran a 10.94-second 100-meter dash for his high school track team, so he was far and away from the fastest player on the field in every game he played.

Henderson didn’t get much playing time at running back in his first two years. But when he became a starter his junior year, he exploded. He recorded almost 200 carries, gained 2,424 yards on the ground, and found the end zone 45 times. Thanks to his amazing rushing abilities, Hopewell High School went 15-0 and won the Virginia Class 3 state championship.

Though he didn’t start at running back, he did start at cornerback for three years. He had 194 tackles and eight interceptions in his three years on defense. He could have been a top recruit as a cornerback as well as running back.

Henderson is one of the most electric and exciting athletes in this class, regardless of position. He has the potential to be next in the tradition of great Ohio State running backs. 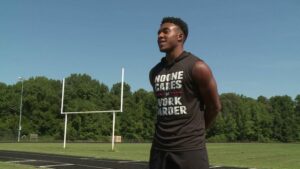