Shuai Peng hasn’t played since the beginning of the pandemic, but the former doubles World No. 1 and two-time Grand Slam champion has recently become involved in a Chinese political scandal and no one has heard from her in the past couple of days. Last Tuesday, the 35-year-old made a post on Weibo (a Chinese social media app, reportedly very much censored by the governing party). Peng accused Zhang Gaoli, a retired politician who served as a Vice Premier of the People’s Republic of China between the years of 2013 and 2018, of having an affair with her and forcing her to have sex.

According to her post, the two had a brief sexual relationship back in 2011, before renewing that seven years later. The 75-year-old Gaoli told her to keep it a secret and said he “wasn’t afraid” of the public scandal Peng can bring about. The sportswoman also admitted to having no evidence, much due to the fact that her partner was always very afraid of her using a recording device or any other way to gather it. Peng decided to come forward with her story after having been dumped by the politician, three years after they renewed their contact.

It looks like the Chinese government has gone through a great deal of trouble to silence all the information regarding Gaoli’s relationship with Peng. Searching their names on Weibo gives out no posts related to the case and while the tennis player’s profile is still online, her message has been deleted and the comment sections under all her previous posts are restricted. The word “wangqiu,” which means tennis in Chinese, has also been blue-penciled.

The worrying thing, though, is that no one has heard from the tennis star in the past couple of days. While this is the first time a member of the Communist Party of China has been accused of sexual misconduct, mysterious disappearances like that have happened in the past. Duan Weihong, otherwise known as Whitney Duan, was a Chinese billionaire who was detained back in 2017 on corruption charges (but it hasn’t been acknowledged by the government). Her husband hadn’t heard from her in four years until she called him, begging him not to release the book he had written about the potentially embarrassing practices of the Chinese government.

There’s no concrete evidence that anything wrong has happened to Peng, but given the track record of the authoritarian rulership in China, the tennis world shouldn’t stay silent. Even such a simple message as Alize Cornet’s or Tara Moore’s Twitter post can bring a lot of attention to the topic. The WTA is yet to acknowledge the issue and while the amount of information we can get from the Chinese government is, as usual, next to nothing, it is important to stand by our people. Peng might be in danger and it’s time for the authorities of tennis to react and try to establish her whereabouts.

#WhereIsPengShuai this is crazy!! pic.twitter.com/1r8WrqsNLr

Editor’s Note:
After this article published, the WTA put out the following statement: 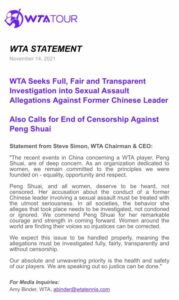