Another Grand Slam, another early exit for the Czech #1 seed. Karolina Pliskova has won 25 titles in her tennis career, sixteen of those on the WTA Tour. She has also spent eight weeks as the World #1 player, so it would be totally unfair to label the Czech’s career as a disappointment.

However, across that otherwise illustrious career, Pliskova has never won a Grand Slam title. In fact, she has reached just the one final over 31 main draw appearances, and only two more semifinal appearances followed that maiden final in the 2016 US Open. Her continually high ranking has seen the Czech seeded within the top echelon of the draw for almost all of these tournaments as well. So the question has to be, what goes wrong in Grand Slams for Karolina Pliskova?

Pliskova’s win percentage against players with a top ten ranking is a lowly 44.59%, though this does improve to 54% over her last 50 attempts. Most telling of all perhaps is that the last time Pliskova beat a top ten player at a Grand Slam was in her run to the US Open final in 2016, beating both Williams sisters en route to that final.

Since then she has lost to Simona Halep in the 2017 French Open semifinals, Halep again in the 2018 Australian Open quarterfinals, and Naomi Osaka in the 2019 Australian Open semifinals. Pliskova can be easily forgiven for each of those losses individually; in fact, she was a slight underdog for each of them. But combined she would have been expected to win at least one, and perhaps the greater point is that there should be more examples of these top ten matches in Grand Slams to work on.

When Pliskova reached the 2016 US Open final it was assumed by many that it would be the first of many in the future. The Czech was 24 years old and was only months away from hitting the World #1 spot. The tennis world was in awe of her powerful serve and blistering forehand and opponents were struggling to deal with her game.

However, since that final, the list of players that have gotten the better of Pliskova in a Grand Slam match is a disappointing one, and it is getting worse. 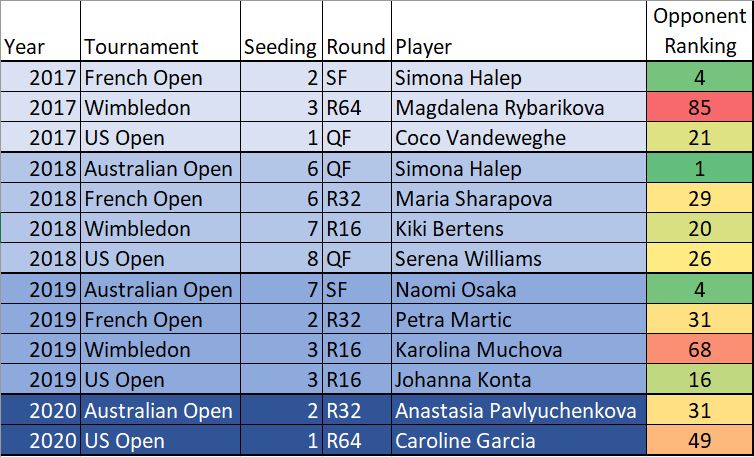 As can be seen in the table above, Pliskova has had a real issue defeating players outside of the top 16 in the world. Her seeding has never fallen below #8, which is testament to her overall quality, and also means that she would never have to face a fellow top 8 player until the quarterfinal stage at the earliest. However, she has found myriad ways of failing to reach that stage, especially more recently.

Despite her seeding inside the top four in the last five Grand Slam events, Pliskova has failed to progress beyond the round of 16. She was a heavy favourite to progress in each of those matches but on each occasion, she was defeated.

Why Is Pliskova Losing These Matches?

The matches she has been losing in these scenarios have always been close. She has never been blown off the court by her opponent and her serve will keep her in most matches. However, her return game hasn’t improved to the extent that it needs to in order to take her chances to get ahead in matches or level the score up. Her movement has been exposed too often by other powerful hitters, see Karolina Muchova, Johanna Konta, Caroline Garcia, and Anastasia Pavlyuchenkova in the recent list above.

There is also no hiding from the fact that she has lost a lot of tiebreaks in these matches. The repetition of getting into a close match and losing it in these Grand Slams must be having an effect mentally. Pliskova seems to be one of those characters who doesn’t let things get to her, but appearances can be deceiving. The results speak for themselves on this occasion.

Her second-round defeat to Caroline Garcia at the US Open featured the latest tiebreak loss to seal a defeat. Though she did well to get back into the second set having been a break down, Pliskova was never able to get ahead in the tiebreak and lost five points in a row from 2-2. This despite not losing a single point on her own serve in the previous two service games.

Will Karolina Pliskova Ever Win A Grand Slam Title?

Karolina Pliskova is going to remain one of the most dangerous players on the WTA Tour for some time to come. She will go on to win many prestigious events and have a good world ranking. However, at the age of 28, with so much scar tissue in her previous 31 Grand Slam events, it is becoming difficult to see when she would be able to win one.

Personally, I don’t think that she will. As was discussed on the most recent Last Word On Tennis Podcast, it is exceptionally difficult to win one of them. We have seen with the variety of Grand Slam winners recently, the strength in depth in the women’s game has never been deeper. Each tournament that we come to seems to have a wide-open draw and Pliskova would have to put together seven excellent performances. Trends in her results suggest she is actually getting further away now.

It may well be the case that the 2016 US Open final, when she was a break up in the deciding set, is the only time the Czech contests a Grand Slam final.