Injuries have been the dominant theme in men’s tennis over the last few years, with several of the world’s top players having to deal with some sort of long-term issue. Sometimes it can threaten a career, as in the case of Andy Murray whose hip problems saw him plummet down the rankings to relative obscurity. At other times an injury can be sudden and gut-wrenching, as with Juan Martin Del Potro who, after getting his career back on track with aplomb, now looks to have a season-ending fracture to his knee.

However, at times coming back from an injury can be a source of inspiration, a blueprint that shows how determination, patience and hard work can pay off. Sports media narratives can be fleeting, so it’s difficult now to appreciate just how far Novak Djokovic had fallen just a few months months ago. In June, the Serb was ranked 22nd in the world and had failed to win a Slam for over two years. A few months later, he looks set to catch Rafael Nadal atop of the rankings and close out the season as world number one with two more Slams in his pocket. That’s both remarkable and inspiring.

Djokovic may catch if all goes well in the Paris Masters this week, but you would expect the brilliant Serb to have one eye on the ATP World Finals, which get underway on the 11th November. The season-ending finale has long been a favourite of Djokovic, with five titles overall, but he has not won since that elbow injury began to blight him and it would be the perfect way to mint his comeback to the very top of the sport.

By and large, bookmakers believe that Djokovic will leave London with his sixth ATP Finals title. He is priced at 8/11 with a handful of major betting companies, yet betting exchanges, which compile odds based on money placed, have him much, much lower. It’s hard to argue against it, such has been the strength of Djokovic’s form over the last few months.

Of course, Paris and other factors could have an impact on the latest World Finals ATP tennis odds, but it’s hard to see Djokovic being moved from his lofty position, barring an unfortunate injury. Indeed, bookies have pushed out his two most likely challengers, Roger Federer and Rafael Nadal, to 5/2 and 7/1 respectively. Both players can, of course, turn it on in London, but it just seems the momentum lies with Djokovic, especially given the fact Nadal is just returning from a troublesome knee injury.

Grigor Dimitrov proved last year that someone outside of the ‘Big 4’ can get their name on the ATP Finals trophy, but he benefitted from the absences of Nadal, Murray and Djokovic and a tired-looking performance from Roger Federer. Coming up against a fresh Djokovic this year, it looks like it will be a difficult task for the like of Alexander Zverev and Kevin Anderson. Others who will likely book their spot soon include Marin Cilic, Dominic Thiem and, perhaps, Kei Nishikori. 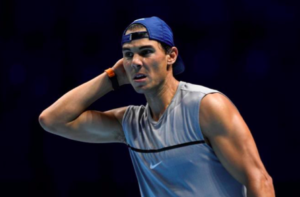 In the end though, this has a Djokovic victory written all over it. He looks so close to getting back to that version of 2015 and 2016, the player who looked to get stronger as the season progressed. Any other result in London, even if it is the Nadal or Federer, will surely go down as a massive shock.