Once more, Game Changer Wrestling emanates from Chicago, Illinois to shine a spotlight with EFFY’s Big Gay Brunch 5. Since 2020, this event held under EFFY’s name has highlighted many of the LGBTQ wrestlers active on the independent circuit. Furthermore, this show has become a platform for wrestlers of various backgrounds and ethnicities to compete under one roof. In addition to a series of singles encounters and a three-way bout, tag team wrestling will be highlighted this year, as evidenced by the match type known as “The Gayest Tag Gayntlet.” Here’s what to expect as GCW closes out Labor Day Weekend. 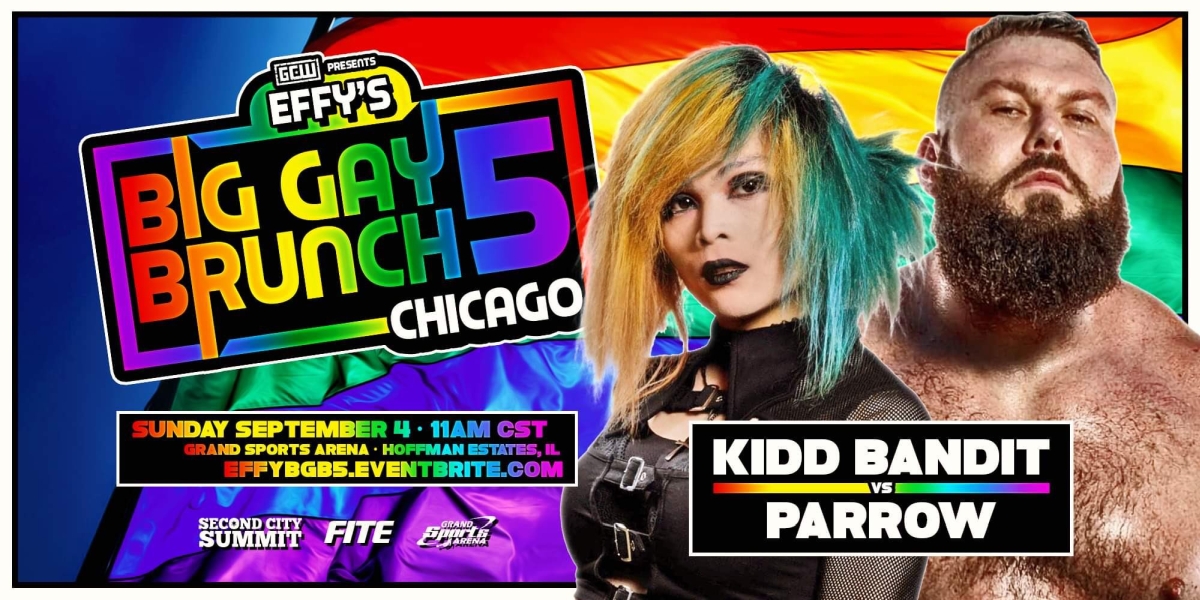 The Protagonist Battles a Powerhouse

The first match announced for EFFY’s Big Gay Brunch 5 will pit “The Protagonist of Professional Wrestling” against a veteran powerhouse. Kidd Bandit makes their return to Game Changer Wrestling to take on Parrow in what can best be described as a clash of styles. Though Bandit has made for themselves on social media, becoming an Internet star of sorts, their accomplishments in the ring can’t be understated. From DEADLOCK Pro-Wrestling to Prestige Wrestling to, of course, GCW, Bandit boasts a largely technical wrestling style with a martial arts influence. Their last GCW appearance took place this past April, where they lost to Allie Katch at Devil in a New Dress. This Sunday, “The Protagonist” faces one of their most formidable opponents yet.

Parrow began his in-ring career in 2009 and found himself wrestling in many organizations since then. Many independent wrestling fans may best know this individual as one half of The End alongside tag team partner Odinson. Together, The End captured tag team gold in Full Impact Pro in Florida and New South Pro Wrestling in Alabama. They’ve also enjoyed screentime with Major League Wrestling and the National Wrestling Alliance. Parrow’s last GCW appearance took place at EFFY’s Big Gay Brunch 2022 this past April, where he fell to Dark Sheik. Much like Bandit, Parrow enters EFFY’s Big Gay Brunch 5 with the need to win. In what can best be described as a David vs. Goliath-esque encounter, who will emerge victorious? 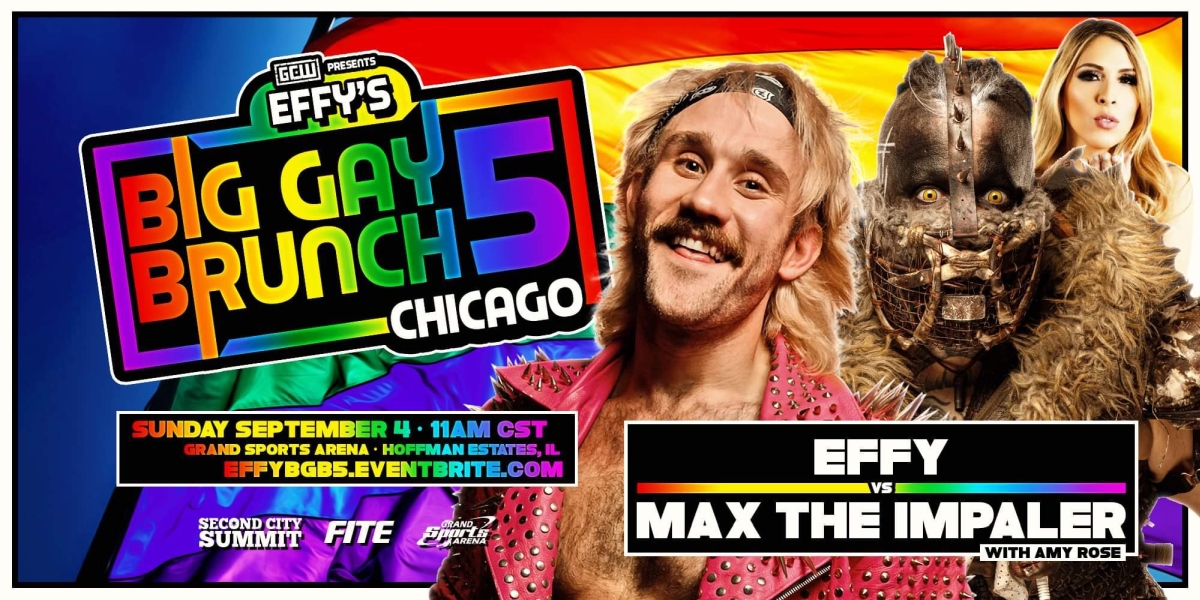 The Non-Binary Nightmare Returns to GCW

Given the namesake of this event, it should come as no surprise that EFFY will be in action this Sunday as well. However, “The Weapon of Sass Destruction” will be in what promises to be a brutal encounter with “The Non-Binary Nightmare” themselves, Max the Impaler. During the course of the Big Gay Brunch saga of events, EFFY has been part of numerous unique encounters. From facing Marko Stunt in 2020 to, most recently, battling Pimpinela Escarlata earlier this year, EFFY’s matches are must-see at these shows. It also must be noted that he works tirelessly to promote these events, regularly sharing graphics for announced wrestlers and matches as they draw closer. When he steps into Grand Sports Arena, he’ll make the shift from online advertiser to in-ring competitor to face an individual he’s never had a one-on-one match with.

Boasting a powerhouse approach and an intimidating presence, Max the Impaler is one of the most recognizable wrestlers on the independent scene. Earlier this summer, Max took part in a trip in Japan, competing for Ganbare☆Pro-Wrestling and Tokyo Joshi Pro Wrestling. Stateside, Max has been prevalent across various organizations and even enjoyed a stint in Ring of Honor prior to the company’s hiatus, not to mention appeared for All Elite Wrestling on a few episodes of AEW Dark: Elevation. To say that the “Nightmare” is living a dream would be an understatement and their star only seems to shine brighter with each appearance. Expect to see said star illuminate Chicago when Max the Impaler battles EFFY at Big Gay Brunch 5.

Max will also be joined by “The Diamond Diva” Amy Rose. For the uninitiated, Rose managed Max during their time in ROH. Serving as “The Non-Binary Nightmare’s” business representative, Rose seemed to be the only individual who had any control over the imposing Max. One can only assume that Max’s representative will play a role in this match. No matter how this encounter unfolds, expect it to seize the attention of viewers in attendance and those watching from home.

Stay tuned to the Last Word on Pro Wrestling for more on this and other stories from around the world of wrestling, as they develop. You can always count on LWOPW to be on top of the major news in the wrestling world, as well as to provide you with analysis, previews, videos, interviews, and editorials on the wrestling world. EFFY’s Big Gay Brunch 5 is set to air Sunday at 11 AM CST on FITE. Tickets are also available via Eventbrite.

Preview: AEW Rampage Card (09/02/22) – All Out Weekend
The Only First And Last Champion: Tyler Bate