On this week’s edition of NWA Powerrr, the company’s top prize is on the line as Pope challenges Matt Cardona for the NWA Worlds Heavyweight Championship. This isn’t all that the National Wrestling Alliance has in store, however, as a notable women’s wrestler makes her Powerrr debut this episode. Throw in tag team action and there will be plenty to see and experience as the show airs live on FITE at 6:05 PM EST. Without any further delay, let’s take a closer look at the action to come. 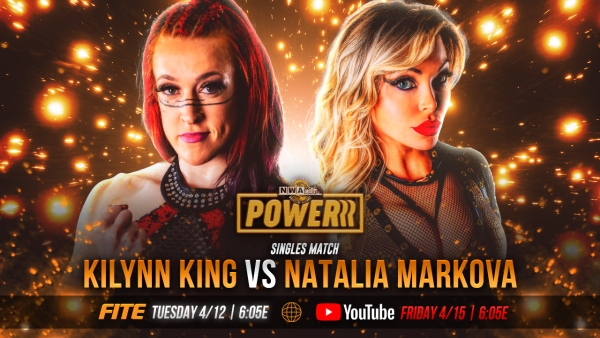 In one of the key matches on this week’s NWA Powerrr, company favorite Natalia Markova takes on KiLynn King, who will be making her Powerrr debut here. Those that have been watching the National Wrestling Alliance as of late can attest to the momentum enjoyed by Markova. “The Russian Crush” previously bested Riley on NWA USA earlier this month. Furthermore, she’s been at the top of House of Glory’s women’s scene as the reigning HOG Women’s Champion, recently successfully defending the gold against Taya Valkyrie. While Markova may be confident heading into Powerrr, she will have to be at the top of her game as she takes on KiLynn King. NWA fans may remember her for her involvement in the NWA World Women’s Tag Team Championship tournament at last year’s EmPowerrr event. Alongside Red Velvet, King made it to the finals, which were won by Allysin Kay and Marti Belle, collectively known as The Hex. Can King make her Powerrr debut a successful one against the formidable Markova?

As one of the winners of NWA’s Champions Series, Pope was awarded a future championship match. Not choosing to settle for anything less than the top prize, on this week’s edition of NWA Powerrr, Pope will challenge Matt Cardona for the NWA Worlds Heavyweight Championship. This match can be traced back to Cardona’s NWA debut late last year at Hard Times 2, where he appeared following Trevor Murdoch’s successful world title defense against Mike Knox. What followed was a brawl that Pope became involved in, attacking Knox during the melee. Despite his valiant efforts, Pope found himself laid out by the end of the night. In the weeks that followed, the former NWA World Television Champion made it clear that he was on the hunt for gold; to this end, there’s no greater prize in the company than the world title. As anyone familiar with Cardona’s antics will attest, his stable, dubbed simply The Cardonas, may not be far behind. The challenger would be wise to keep his head on a swivel in arguably the most important match of his NWA career.