It’s time for a birthday bash on ChocoPro #195. On this episode, the Gatoh Move Pro Wrestling will be celebrating Masahiro Takanashi, who is turning 39 years old. There are few gifts as tempting for a wrestler as a championship match, which is exactly what the veteran “Drunken King” has in store for this episode. The action to be seen on this episode is plentiful and, as always, viewers will be able to see it all via the official Gatoh Move YouTube channel. Here’s what to know as we head closer to this celebratory show. 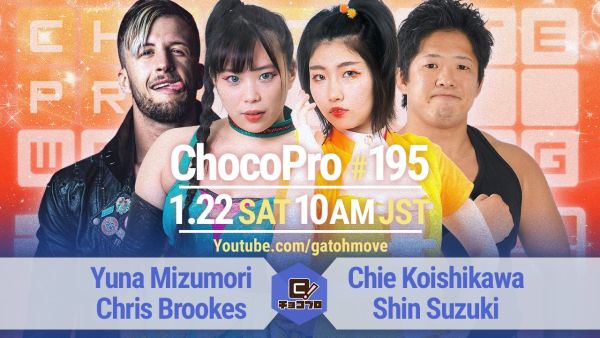 Starting off ChocoPro #195 is the brash yet formidable duo of Chris Brookes and Yuna Mizumori, collectively known as TropiCalamari, taking on the spirited Chie Koishikawa and Shin Suzuki. Whether within the walls of Ichigaya Chocolate Square or promotions such as DDT Pro-Wrestling, TropiCalamari should be familiar to those in the Japanese professional wrestling circle, not only due to their wrestling prowess but colorful presentation. Simply put, if Brookes is wearing makeup, it’s safe to assume that “Yunamon” isn’t far behind. The last time they teamed up was back on Episode #181 last month; this was a losing effort for them, so a victory will be that much more sought after.

The same can be said for Chie Koishikawa and Shin Suzuki, both of whom haven’t had much luck in their ChocoPro appearances. This is especially true for “Chiezo,” who has struggled to pick up victories throughout Season 11. Despite this, her popularity with fans remains strong, as her energetic disposition and underdog appeal both continue to captivate users. Meanwhile, Suzuki, who’s been busy on the independent scene this year, will be making his first Ichigaya appearance for the first time in roughly a month. Suzuki last battled Baliyan Akki on Episode #183, and while this was a valiant performance, Akki emerged victorious. 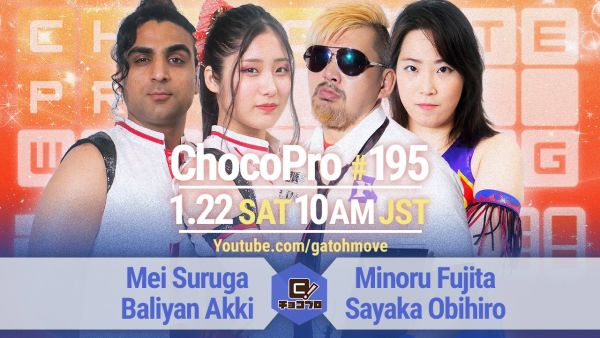 Also in action, on ChocoPro #195, are not only the current Asia Dream Tag Team Champions but the official Super Asia Champion. Moreover, they’ll be participating in the same match, as Asia Dream Tag Team Champions Best Bros take on the duo of Super Asia Champion Minoru Fujita and Sayaka Obihiro. It’s not often that the Asia Dream Tag Team and Super Asia titleholders compete in the same match; this alone makes this encounter must-see. However, given how dominant both parties are, one can look at this as a situation where an irresistible force meets an immovable object. While both entities are undeniable in their own ways, there will come a time when one has to give.

This isn’t to overlook Sayaka Obihiro, though. “Obi-san’s” veteran presence will undoubtedly help Fujita against the seemingly unstoppable Mei Suruga and Baliyan Akki. Anyone that’s familiar with the work of the competitors involved is safe to assume that this will be a solid match. However, Fujita’s efforts, particularly in Gatoh Move, aren’t rooted in tag team wrestling. He is the officially recognized Super Asia Champion, and while he hasn’t defended the title since this past July, there will come a time when he has to meet his next challenger. This may not take long to come to fruition, however, as he’ll have his sights set on the final match of the show.

This leads us to the main event of ChocoPro #195, which sees Super Asia Interim Champion Chon Shiryu defend his title against the birthday boy himself, Masahiro Takanashi. To say that these men have history would be an understatement. Dating back as far as the mid-2000s, they have served as partners and rivals alike to one another. They’ve worked together in organizations such as DDT and Ice Ribbon, though it was in Gatoh Move where the bulk of their matches together have taken place. In fact, as Takanashi was rehabbing during the majority of 2020, he wrestled his first match in several months – an exhibition, at that – against Shiryu on Episode #85. Not only was this indicative of their history, but more importantly, the trust they share.

In late 2021, Shiryu and Takanashi’s paths crossed on multiple occasions. Suffice to say, the pursuit of championship gold only intensified their rivalry. There’s no denying the respect they share for each other and it’s unlikely that this match, no matter the result, will do much to change it. However, in professional wrestling, championship victories are invaluable. They are indicative of the statuses of their holders; in other words, everyone wants to be champion. Heading into ChocoPro #195, as he celebrates his birthday, the stars appear aligned for Takanashi to capture championship gold. This isn’t guaranteed, however, especially as a competitor as determined as Shiryu. Will a birthday miracle occur or will the interim champion’s reign continue?