Kazuchika Okada won G1 Climax 31 on Thursday, marking the first time he has won the prestigious tournament since 2014. Okada has now won the G1 Climax three times, but no more has been as important as this one. Not only for him as his return to form was evident but it was just as needed for New Japan Pro Wrestling (NJPW) as a whole. The journey to get to this point for both Okada and NJPW has not been a pretty one, seeing the man himself become a shell of what he once was while NJPW has lost a ton of goodwill with their fans, leaving them without answers more than ever before. What happened in this tournament was the ultimate return of “The Rainmaker,” setting up a far brighter and safer future for NJPW.

“The Rainmaker” Returns To Form

Okada’s introduction of the Money Clip almost felt as though he wasn’t interested nor into being who made him one of the best in the world for the better part of the last decade. Heading into G1 Climax 31, there was uncertainty as to who would come out of it as the winner. Tetsuya Naito made sense with the idea of IWGP World Heavyweight Champion Shingo Takagi waiting for his Los Ingobernables de Japon stablemate on the other side. Of course, injury guaranteed that this would not be Naito’s year. Jay White seemed destined to win it this year but COVID-19 played a major factor in keeping him away from Japan for the time being. Will Ospreay still claims to be world champion and was never supposed to be in it anyways with his injury problems.

When breaking it down like this, it left NJPW with few names to really consider. Sure, making a new main event star is something that Gedo and company have tried to do over the last couple of years, but at the end of the day, they needed a crutch to stand on and that was Kazuchika Okada. At the same time, Okada needed to show that it was indeed his time to rise again. “The Rainmaker” had to return. Whether it be the finish itself or the overall dominant version that saw Okada set record after record. There was no other choice. Fresh off a loss to Jeff Cobb at Wrestle Grand Slam in the Metlife Dome, it was time for him to put it all together again for the first time in a long time. Okada needed this run and NJPW needed Okada.

In the G1 Climax, Okada showed to the world that his back injuries were a thing of the past after taking some much-needed time off in the summer and that “The Rainmaker” was here to stay once again. The best fashion to show the world that he was seriously back in his very first match of the tournament. It was a matchup with his greatest rival, the “Ace” Hiroshi Tanahashi. Being separated from one another since 2019, it felt as though everything was right again in New Japan as they made EDION Osaka Arena get as loud as they possibly could with the simplicity of claps. Instantly, Okada’s face told the story that this wasn’t the version we saw of him for the better part of the last two years but it was the one that made history time and time again.

Okada’s win over Tanahashi in a spirited battle came via Rainmaker, indicating that he was no longer messing around. The Money Clip would still be a factor, but not the end all be all. If he wanted to make it to the end, he was going to have to count on what made him the best. “The Rainmaker” would roll through the B Block, defeating EVIL, YOSHI-HASHI, Hirooki Goto, SANADA, Taichi, and Chase Owens to leave him at a perfect 7-0, neck and neck with his rival in Cobb. On the second to final night of block action, Okada was stunned by Bullet Club’s Tama Tonga. Rather than doubting himself, he picked it right back up for his match with Cobb. The United Empire’s powerhouse was not stopped up until this point but when he ran into a Rainmaker, it was certain that this was Okada’s tournament to win.

“The Rainmaker” would meet Kota Ibushi in the final. It was a match that made all the sense in the world. Ibushi, going for his third straight G1 Climax win and part of the massive change in NJPW since Okada had last been on top, vs. the re-emerging “Rainmaker.” A story that writes itself. The match came to a finish when Ibushi broke his arm on a Phoenix Splash, signaling a difficult conclusion to what was supposed to be the final moment in Okada’s return to greatness. Instead, Okada looks ahead to what his G1 win guarantees him — the main event match of Wrestle Kingdom 16 inside the Tokyo Dome, presumably against Shingo Takagi. Or will he? Okada’s win was only the first step in the rebuilding of NJPW.

Okada Winning is the First Step in NJPW’s Rebuild 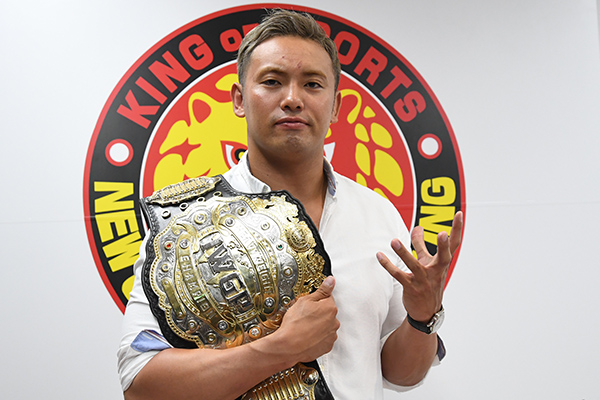 Okada continued on as a reporter asked him about challenging Shingo Takagi instantly for the IWGP World Heavyweight Championship.

“Challenge him,” Okada questioned. “He’d be the one challenging me. The way I see it, I’m the champion. He’s not.”

The reporter then questioned further, asking about the V4 championship.

“That’s the belt I’ve always held, correct,” Okada asked the reporter. “I did just win this whole G1, which he, the champion, also participated in. If he’s up for it, so am I. If it’s presented to me, I’m game. Usually the G1 winner challenges at the Tokyo Dome. But he’s not holding the title I held. So why doesn’t he come and challenge me? Which of us is stronger? Which of us makes New Japan more exciting? Who just lit up this G1? Takagi? No, I did. How exciting did I make this G1? Who should be seen as the strongest? Me! That’s what I’m saying.”

In one simple press conference, Okada brought hope back to NJPW fans worldwide. Never was it a collective feeling that unifying the IWGP Heavyweight and Intercontinental Championships was the right move. Clearly, that is felt by those in the promotion as well. Okada doesn’t see himself as the challenger but the champion. He doesn’t look at the title that Takagi holds as the title. No, it’s the championship that he held on his shoulder for 720 days that he believes is the true championship and beating Ibushi, the last man to hold that title, in the G1 makes him the one true champion of NJPW.

“The Rainmaker” is back and it’s time he attempts to recapture the essence of what made NJPW the “King of Pro Wrestling.”