It’s been three months since Butch vs Gore – the production company run by wrestler Billy Dixon and former Prime Time Pro Wrestling co-promoter Lolo McGrath – announced the creation of the first-ever Cassandro Cup, a new annual tournament to showcase the best in emerging talents from the explosive LGBTQ+ wrestling scene. The tournament is named after Cassandro el Exótico, the legendary luchador that has been a star in Mexico since the late 1980s with such promotions as AAA Lucha Libre, as well as independents in the US and Japan. Drawing on the name of the PTPW event from March of 2020 that was LGBTQ+ specific, Butch vs. Gore is set to bring the LGBTQ+ wrestling scene to new heights, with the Cassandro Cup looking to be a new flagship annual event. Well, the time is now, and this Sunday at 7pm EST, the long-awaited and heavily anticipated Cassandro Cup is set to air on IndependentWrestling.tv (IWTV). The card features multiple non-tournament matches featuring veterans of the LGBTQ+ community and select allies, as well as a seven wrestler tournament to crown the inaugural Cassandro Cup tournament winner. As an added bonus, it was recently revealed that the winner of the tournament will face IWTV Independent Wrestling Champion Lee Moriarty at the IWTV Family Reunion event over WrestleMania Week.

. @apexofcombat will make his first IWTV Independent Wrestling Championship defense at Family Reunion against the winner of @ButchVsGore's #CassandroCup 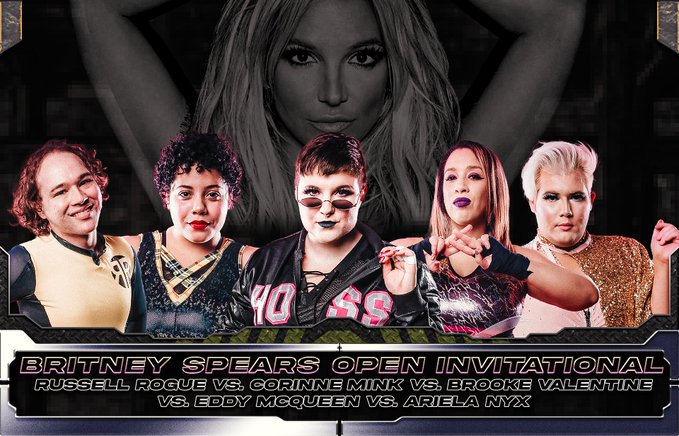 The Britney Spears Open Invitational has three rules. Number one, everyone must come in to a Britney Spears song as their entrance theme. Number two, eliminations are via pinfall or submission. And third, the winner gets a shot at the PTPW 51st State Championship, currently held by EFFY. The five-way contest features five interesting and unique names, starting with Russell Rogue. Hailing from Minnesota, Russell is a student of The Academy, the wrestling school run by former WWE/TNA star Ken Anderson (Mr. Kennedy) and a regular with Midwest All-Star Wrestling (MAW) in Minnesota. Corinne Mink is actually now entering her retirement year, after announcing her plans to leave wrestling at the end of the year, but the New Jersey native and student of Pat Buck has been a regular with WrestlePro since 2016, as well as working for the likes of New York Wrestling Connection (NYWC), Pro Wrestling Magic, Eclipse Wrestling, and much more, and is a former NYWC Women’s Champion. “The Queen B” Brooke Valentine is another rising star coming out of the Midwest scene in Iowa, where she’s been a regular with Impact Pro Wrestling (IPW). She’s also the ZOWA Women’s Champion in Northern Illinois and had a banger of a match against Ziggy Haim in her GCW debut at GCW Fight Forever. New York City’s Ariela Nyx is a product of the Create A Pro Wrestling Academy and is a regular in the New York/New Jersey scene with Victory Pro Wrestling (VPW), Pro Wrestling Magic, CAP, and more, where she’s a former VPW Women’s Champion and PWM Women’s Champion. Finally, Eddy McQueen is an eight-year veteran of the LGBTQ+ scene, competing for the likes of Combat Zone Wrestling (CZW), Pro Wrestling Magic, NYWC, and many more, as well as being a pioneer on multiple LGBTQ+ themed showcases. 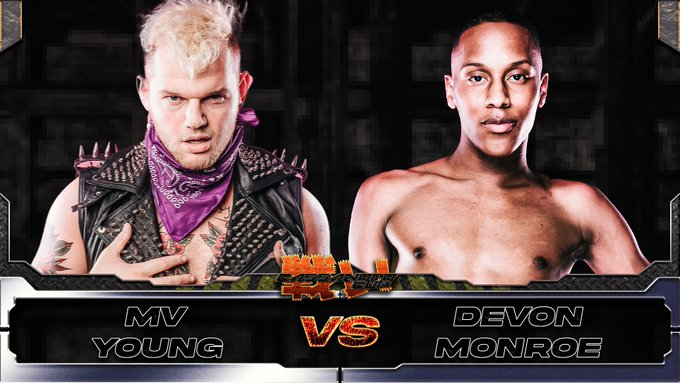 Two of the undisputed faces of the LGBTQ+ scene blooming in 2020 will face off in a singles match that could just steal the entire show. MV Young, the punk rock sex god and PolyAm Cult leader, has become not just the bad boy who has brought himself and his 15,000 romantic partners to the next level, but has become one of the new generals of the entire LGBTQ+ scene – his PolyAm Cult Party events are becoming must-see events for any wrestling fan. He’s facing off against Devon Monroe, who emerged as one of the top prospects out of a Minnesota indie scene that also produced AEW’s Top Flight, to become one of the breakout rising stars in 2020. Two of the undeniable faces of not just LGBTQ+ wrestling but indie wrestling as a whole in the coming years, this is a match to watch. 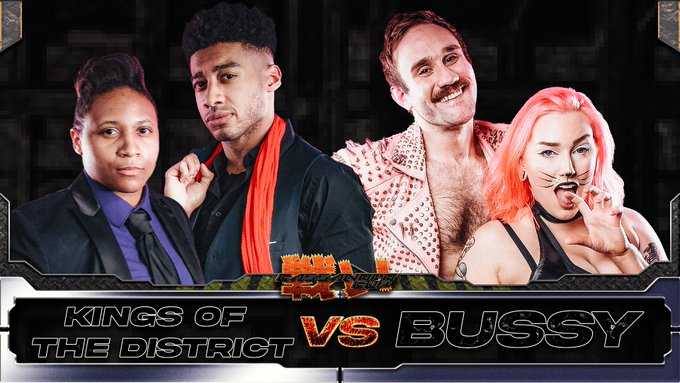 Two of the top tandems in the US indies today. Kings of the District features the combined efforts of Jordan Blade (who is on the absolute verge of exploding as a singles wrestler thanks to her last year) and Eel O’Neil, who earned huge acclaim for their work in PTPW where they were the PTPW Tag Team Champions, and made their GCW debut at GCW Fight Forever in a fantastic tag match against Camaro Jackson & Mike Outlaw. Blade has become a breakout star with Paradigm Pro Wrestling (PPW) in the UWFi Contenders Series. They’re facing the lovable unit of EFFY and Allie Kat, two of the most entertaining and beloved performers in the US indies over the past two years, as well as GCW regulars. They first paired up last August at GCW Keep In Touch and then again in January at GCW 56 Nights. Despite their individual accolades, BUSSY is 0-2, so they’ll be looking to get their first win as a tag team, but against a well-oiled machine like Kings of the District, they may have their work cut out for them. 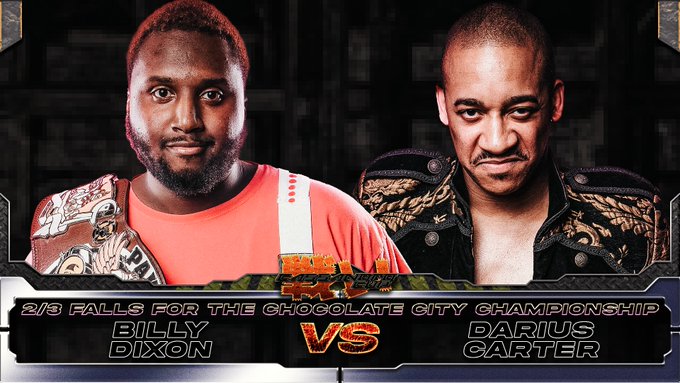 The final non-tournament match is a grudge match for the F1ght Club Chocolate City Championship, held by Billy Dixon, against his arch-nemesis Darius Carter. Billy Dixon has emerged as arguably one of the most important voices in the LGBTQ+ movement of the past year, and it was at his Paris Is Bumping event last year that this feud began, when he and Darius Carter went full throttle, with Dixon picking up the victory. Darius Carter is no slouch though – a technical marvel with a class all his own, “The Debonair Millionaire” is an 11-year veteran of the New York and Northeast indie scene, as a long-time regular with Beyond Wrestling, Warriors of Wrestling, Pro Wrestling Magic, and more. He’s a 2x WOW Heavyweight Champion and is PWM Dark Arts Champion. Dixon has shown he can handle the abuse in his past encounter with Carter last year, as well as his fantastic showing against EFFY at GCW Fight Forever. This one is a 2-out-of-3 Falls Match, with Dixon’s Chocolate City Championship on the line, and with two very different approaches to wrestling colliding, it could be anyone’s match. This one is personal. 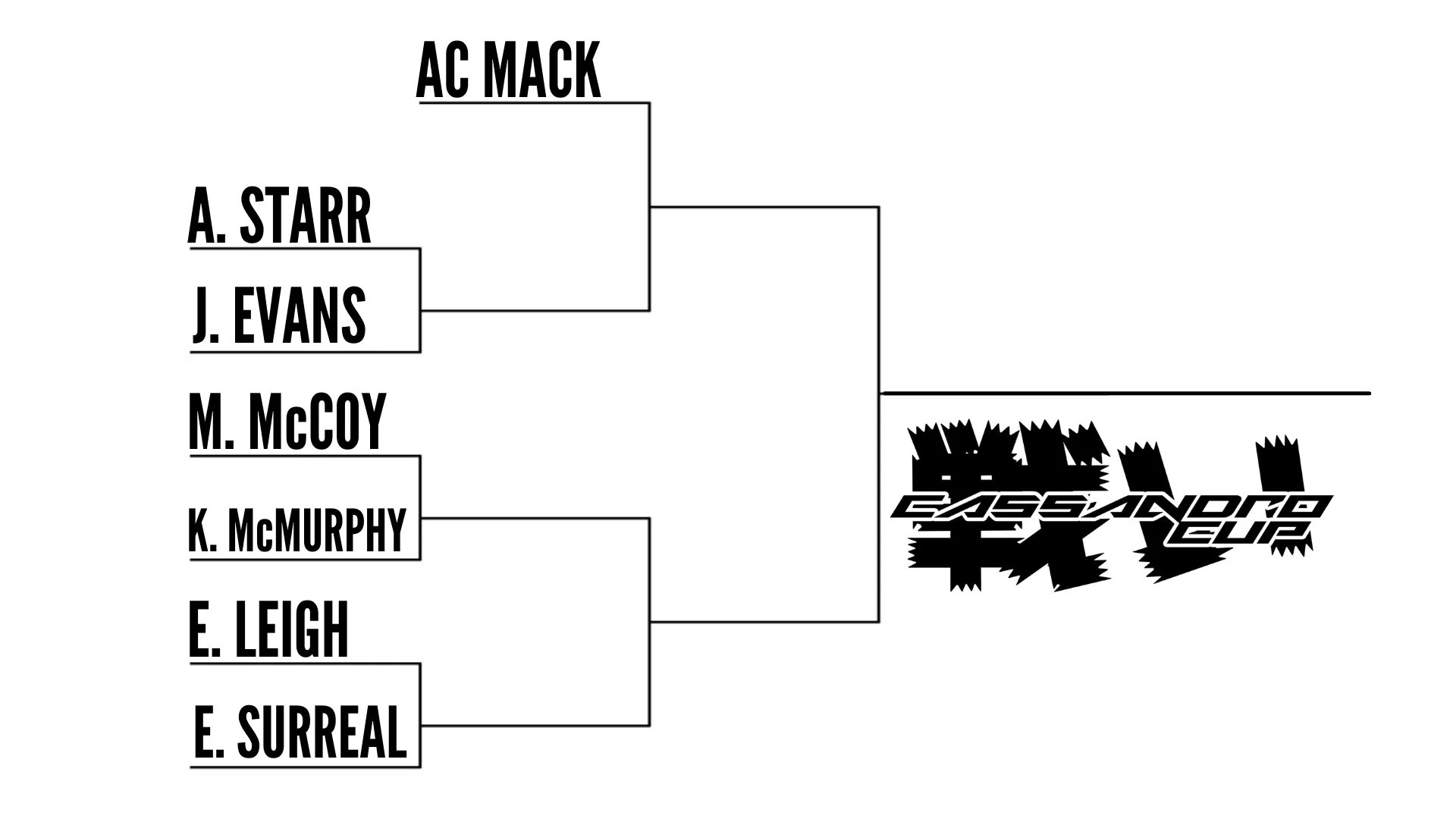 AC Mack Gets A Bye in Cassandro Cup First Round 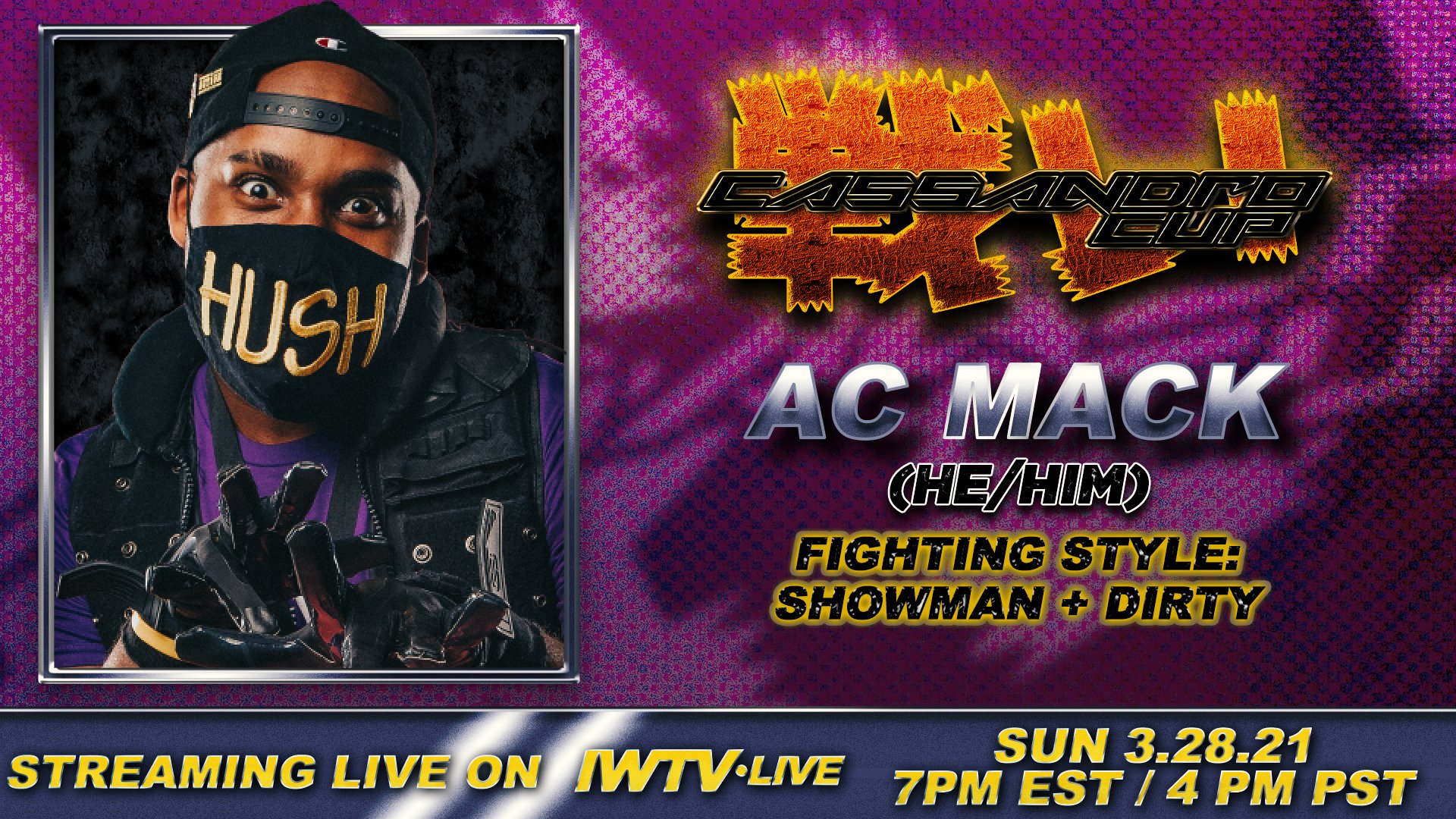 AC Mack has been one of the absolute top wrestlers from the renaissance of Southern pro wrestling over the past few years, where he held the ACTION Championship for 798-days until losing it to Arik Royal recently. Aside from his domination in ACTION Wrestling, he’s a regular throughout the Southern indie scene with Southern Underground Pro (SUP), Southern Honor Wrestling (SHW), and much more. Mack didn’t always have a bye, but recent actions by his originally planned opponent lead to his match being canceled, but AC Mack will get a first-round bye out of the situation, putting “The Mack of All Trades” one step closer to winning the Cassandro Cup. 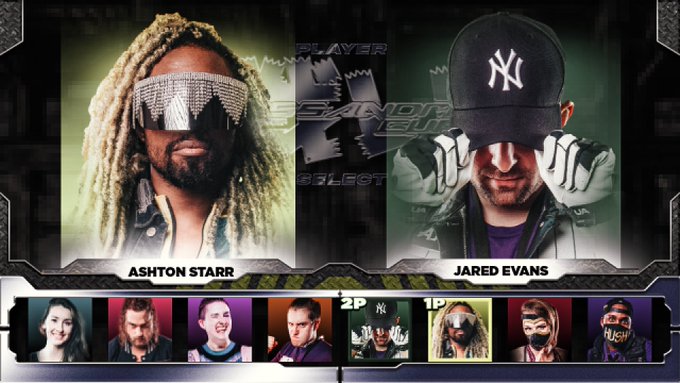 AC Mack will face the winner of this match in the second round. Ashton Starr is another wrestler who took advantage of the pandemic era and improved himself in the ring and as a brand. A student from AR Fox‘s WWA4 Wrestling School in 2014, he’s now one of the top stars in the Southern indie circuit with the likes of ACTION, Southern Honor, Southern Fried Championship Wrestling (SFCW), and Anarchy Wrestling, and last November made his AEW debut on AEW DARK. He’s facing off against New York City’s Jared Evans, another product of CAP, who has also worked for the likes of CZW, Pro Wrestling Syndicate, PTPW, GCW, and much more over the years. A highly underrated talent, he’ll be putting it all on the line to knock some of the shine off of Starr’s 2020. 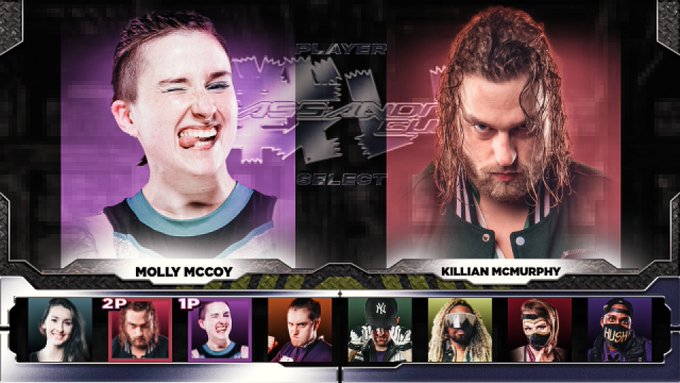 This one pair off two of the stars of High Tension Wrestling‘s Camp Leapfrog series on IWTV, and yet two more rising stars in the US indies. Molly McCoy started out in CHIKARA in 2019, where she joined her cousin Boomer Hatfield and since has become a fan favorite with her ice hockey enforcer in the ring persona. She’s thrown knuckles in the likes of SUP, Hardcore Hustle Organization (H2O), Pizza Party Wrestling, and Black Label Pro, and she still continues to fight alongside Boomer in the Pop Flyers in Camp Leapfrog. Killian McMurphy is also one of the regulars with Camp Leapfrog, where he leads his squadron of Goons (Big Dust, Eel O’Neal & Myles Millennium) into making Camp life miserable for everyone else. At Camp Leapfrog Christmas Trios, it was the Pop Flyers and Edith Surreal (then Still Life With Apricots & Pears) knocked out The Goons, so this could be a measure of revenge for McMurphy – and with one of his Goons in the building (Eel is also in Kings of the District), it wouldn’t be out of the question for McMurphy to try and stack the cards against Molly. 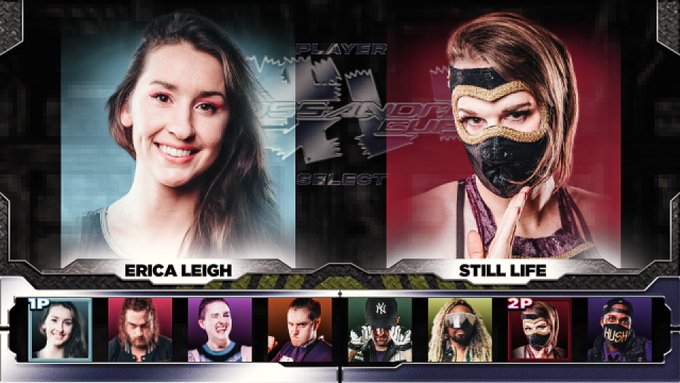 Erica Leigh is yet another indie star who had a huge year in 2020, as a mainstay with Camp Leapfrog, and her own series of great showings with the likes of Pro Wrestling Magic, PTPW, CHIKARA, and GCW. Pay attention to her work in 2021 if you’ve yet to discover her – don’t let her zany personality on Social Media sway you that she can’t go in the ring. She’s got all the tools and is only going to get better. Her opponent on Sunday night is arguably the odds-on favorite to win the whole thing. Edith Surreal (formerly Still Life With Apricots & Pears). Edith was on a two tournament winning streak, with CHIKARA Young Lions and Camp Leapfrog Christmas Trios, but recent knockouts in Beyond’s Tournament for Tomorrow and Enjoy Wrestling‘s Enjoy Cup has evened the score. Edith Surreal had an explosive 2020 after grooming in CHIKARA, and this year is definitely going to be her year. A big win at the Cassandro Cup could help get her back on track as the Tournamentor.

Stay tuned to Last Word on Pro Wrestling for more on this and other stories from around the world of wrestling, as they develop. You can always count on LWOPW to be on top of the major news in the wrestling world, as well as to provide you with analysis, previews, videos, interviews, and editorials on the wrestling world. Watch the Cassandro Cup on IWTV on Sunday, March 28, 2021 at 7pm EST.