With Kyle Busch leaving Joe Gibbs Racing for 2023, how does Toyota’s most successful NASCAR franchise recreate a developmental ladder?

With the announcement that Kyle Busch would not be returning to Joe Gibbs Racing, it begged the question of who Coach Gibbs will designate as the one to carry on the legacy of the flagship #18 as Kyle Busch, Bobby Labonte, and Dale Jarrett had done before.

If the historical trends of Joe Gibbs Racing were to continue in this scenario, the championship-winning franchise would look firmly toward the fountain of youth over veteran experience to showcase a long-term strategy for their athletes and potential sponsors alike.

As a result, JGR will more than likely need to revert back to square one and build an all-new developmental ladder from the ground up. One that provides a clear path forward for manufacturer-backed stock car athletes in a similar manner to how Joe Gibbs brought up Tony Stewart, Denny Hamlin, Daniel Suárez, Erik Jones, and Ty Gibbs all before.

With Brandon Jones also moving to Chevrolet power at JR Motorsports for 2023 and beyond, if trends were to continue for Ty Gibbs and 2024, it begs the question wondering if JGR will make a play for John Hunter Nemechek before he’s signed away to Chevrolet.

If 2023 is, indeed, the farewell tour for Martin Truex Jr. in the #19 for JGR, it would be expected at that point for Ty Gibbs to take over and lead the team into the future of success in stock car racing.

So, how would Joe Gibbs Racing go about a recruitment process in preparation for the future as Toyota’s most statistically successful franchise in its 18-year history of competition in stock car racing?

The rules of this search are simple. A showcase of fresh-faced drivers who have yet to be given an opportunity in competitive equipment.

It all comes down to contracts.

Being adaptive and looking deep into that fountain of youth, it is now time to showcase those individuals one could deem worthy of taking that opportunity and running with it. Without further ado, these are three individuals of whom I plead my case with Joe Gibbs Racing.

Originally from Hillsborough, California, this 23-year-old currently holds 19 victories in USAC, with 74% of those victories coming on asphalt facilities.

She began her career competing in karts at the age of 9 before making her debut in USAC, where she placed second overall in the 2014 and 2015 campaigns USAC’s Western U.S. Pavement Midget Series, en route to the series championship in 2016. 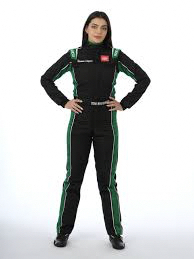 Driving for DLP Motorsports in the 2020 Carolina Pro Late Model Series, Bredinger placed 4th overall in the final standings, scoring 697 points and an average event finish of 7th. She signed with Venturini Motorsports in 2018, where she competed part-time in the ARCA Menards Series in both 2018 and 2021.

She currently competes full-time for Venturini Motorsports in the ARCA Menards Series, where she’s currently placed 5th in the overall standings with an average finish of 12th. One could look at her background and see the comparisons to what Coach Gibbs likely saw in Tony Stewart, Jason Leffler, and J.J. Yeley due to their respective USAC backgrounds.

“I knew that racing professionally was something I wanted to pursue after spending time go-karting.” said Breidinger. “There is no feeling like the one you get behind the wheel on a track. The time I had go-karting inspired me to keep going and try something new and see where I best fit in on the track. I’ve had such great experiences with midgets and late models, and everything just emphasized how this sport is for me.”

“When I’m not at the track, I’m usually training whether that’s (simulation) training or working out. I really push myself to be the best I can be and focus on where and how I can improve.”

Her career goal is to, ultimately, become successful in the NASCAR Cup Series. There is so much potential for this to become a successful formula. From the competitiveness of the equipment to the competitive nature of the athlete, to the sponsorship opportunities of a hometown hero (Hillsborough being 17 miles south of San Fransisco), it’s all there.

Being a Toyota contracted driver, what does JGR ultimately have to lose in signing her as the new face of the #18 Toyota in the NASCAR Xfinity Series?!

Only 21 years young, this native of Muskogee, Oklahoma is currently competing in USAC. Bryson placed 3rd overall in the Restricted A Class of the 2015 National Micros Series and captured victory in the Tulsa Shootout that same year. 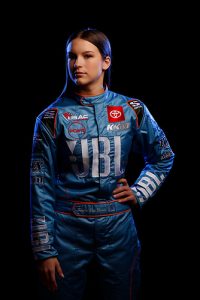 With sponsorship behind her in Yahoo, Curb Records, and JBL speakers (just to name a few), a developmental deal with humble beginnings in the ARCA Menards Series combined with the perfect success chemistry of competitor and crew chief would be a winning formula in a ladder climb of concept to completion.

She just needs to be presented with that opportunity to grow. Being a competitor who would be seen building micro-sprint chassis if not inside an iRacing simulator, the determination to win is in her blood. She stated,

“I started racing around the age of 9 and we started just for the sole purpose of having fun, the passion grew inside of me and I had a strong desire to win. Racing was the only thing on my mind since a young age and I knew I wanted to do it for the rest of my life.”

“I want to excel in racing no matter what series I am running at the time. Getting better each race and being at the top of the competition list…I want to find a lifelong career doing what I love with the help of Toyota Racing.”

At only 17, this Toyota developmental driver lives and breathes racing. If they were not at the track, they would be training in some capacity. Robusto said,

“I knew since the first time I got in a go-kart at the age of 4 (that I wanted to pursue a career as a race car driver).”

When Robusto was 13, she competed in the U.S. Legends INEX Division, where she captured victory in the Battle of the Big Top at Texas Motor Speedway. Thus far in 2022, Robusto has competed in 21 events in NASCAR’s Advance Auto Parts Weekly Series, where she currently possesses a 90% Top 10 placement over the season. 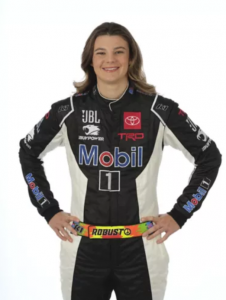 By signing this manufacture-backed competitor to a developmental contract, this Fort Mill, South Carolina native would be a perfect showcase of working through a team’s developmental racks from the ground up. Get her started in the ARCA Menards Series before moving on up the ladder as a collective unit pending success.

The future is now. This is the chance for Joe Gibbs Racing to take a step forward into the future and make history. In a sport where the competitiveness of the equipment makes or breaks the success rate of both competitor and team, the aforementioned three have statistics that showcase why they are worthy of that opportunity in their contracted manufacturer’s developmental ladder.

With all front and center focus being on the female pioneers in Janet Guthrie and Danica Patrick, it is often overlooked that there are female competitors all over the world who are looking to make names for themselves in a sport that has no reason to be limited to only one gender.

What do they have to lose?

Read Next – NASCAR Cup Series: Bristol Preview, Predictions, and How To Watch

F1: What’s next for Porsche after the Red Bull rebuff?
F1 TV Ratings: ESPN sets a new bar for the Italian Grand Prix