Travelling across the world, thirty young Formula 3 drivers are competing to secure their chances of making their way to F1.

The Formula 3 campaign is where some of the brightest young drivers look to make their mark in motorsport. Notable winners of the F3 campaign include Formula 1 drivers Charles Leclerc, George Russel and Mick Schumacher. Let’s recap the season to date, take a look at the current standings, and what remains on the 2022 calendar.

The FIA Formula 3 Calendar. The rounds highlighted in green are the races already completed, who won each race, and which team they drive for. 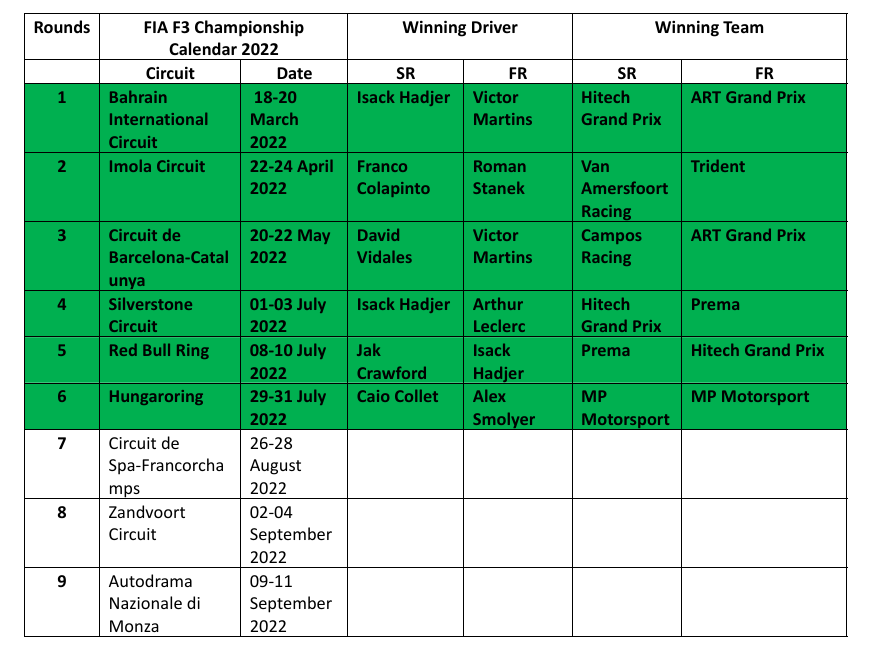 Each weekend consists of two races: the Sprint Race and the Feature Race. Each race has a different points system that overall makes up the points for the championship. On Saturday, the Sprint race occurs where the top 12 drivers from qualifying from Friday are reversed. On Sunday, the Feature race occurs with the top 12 races starting in their normal qualifying order.

Qualifying: A dream start for new entry Van Amersfoort Racing as they secured the first pole of the first race of the season with rookie driver Franco Colapinto. Reigning champions Prema had a miserable start with their three drivers: Oliver Bearman, Arthur Leclerc, and Jak Crawford qualifying 11th, 14th, & 21st.

SR (Sprint Race): With the top-twelve reversed, Zak O’Sullivan was on pole with Bearman right on his tale as soon as the lights went out. Sullivan wasn’t able to keep Bearman at bay for long as Bearman overtook him on Lap 5. On the same lap, ART teammates Victor Martins and Gregory Saucey collided with one another, with both suffering damage and retiring from the race.

Although Bearman reached the checkered flag as the winner, his repeated violation of track limits demoted him to second after he received a five-second time penalty. Promoting rookie Isack Hadjar, who started from fourth, to take the victory.

FR (Feature Race): Lap 1’s chaos was quickly interrupted by a safety car after Zane Maloney and Caio Collet suffered damage to their car, both retiring from the race. One safety period ends, and another begins as Roman Stanek, who was running in P3, suffered a puncture after contact with Alex Smolyer on Lap 5.

Arthur Leclerc was the man of the day as he clawed his way from P13 to P2 on the grid. Victor Martins took the lead off Franco Collapinto on Lap 15 before Colapinto was demoted to P5 from P3 after a five-second penalty for repeated track limit violations.

Qualifying: Zane Maloney achieved pole position for the Feature race with Stanek qualifying P2 for the second race in a row.

SR: Colapinto once again had a good start, but it wasn’t enough as Collet overtook him fairly easily with DRS (Drag Reduction System) on lap 4. Bearman and Leclerc had a close call on lap 8 with Leclerc forcing Bearman onto the grass, resulting in Bearman spinning and ending up P23.

Lap 9 ended with both Sullivan and Pepe Martin sliding off the track and into the barrier as a result of fluid on the track that was left from Bearman’s car following his spin. Kush Maini was given a drive-through penalty after he failed to line up his car properly in his grid spot.

The final lap of the race saw Colapinto regain the lead off Collet who was under pressure from Hadjar. As Hadjar was trying to overtake the pair collided and retired from the race. Martins and Jak Crawford were rewarded with second and third respectively.

FR: Before the race had even begun, trouble had ensured as rain fell on the track. Making the conditions, even more, trickier to drive in. The opening lap was filled with surprise as Collet, who started ninth, overtook Maloney for the lead of the race before the first lap had even finished – a sneak peek of how much the right tire can influence the rain.

As the safety began to end, Maloney was attempting to warm up his tires to prepare to restart. However, Maloney weaved too aggressively, causing him to slide off into the grass. As the race restarted, Bearman overtook Stanek to take the lead of the race.  The pair continued to battle for the lead as they approached the final lap, with Stanek prevailing. Bearman was then overtaken by team-mate Crawford and Hadjar for the final podium place.

As Bearman and Saucy were battling side-by-side, Bearman clipped the front of Saucy’s car, causing him to spin and retire on the final lap. Bearman received a post-race penalty which promoted team-mate Leclerc up to P4 after starting P21.

Qualifying: Roman Stanek finally took his long-awaited first pole as Arthur Leclerc managed to shake off his bad qualifying record with a P5 result – outqualifying both of their teammates.

SR: Home-hero David Vidales started from Pole following Maloney’s penalty and maintained his position throughout the entirety of the race despite pressure from Crawford. Tied with Leclerc as the leader for the championship, Martins suffered a mechanical failure on Lap 7 and was forced to retire. Giving Leclerc the lead of the championship, who finished P4.

FR: Martins took the lead of the race after overtaking Stanek on the opening lap. Leclerc dropped down to ninth and while battling with David Vidales, the pair collided with both running off the track. Vidales suffered damage as a result and Leclerc was given a five-second time penalty for causing a collision, dropping him down to sixteenth. With Martins having won the race and Leclerc not scoring, Martins retook the lead in the championship.

Qualifying: Sullivan took his second pole of the season with Leclerc close behind in P2.

SR: Martins once again overtakes for the lead during the opening lap, maintaining the lead this time until the checkered flag. Hadjar overtook Maini and Ushijima for P3 and P2. The two Charouz teammates, Laszlo Toth and Zdenek Chovanec, collided with each other to cause a safety car.

Hadjar and Martins battled for P1 during the closing laps of the race. Hadjar takes the lead during the penultimate lap of the race with Martins finishing P2.

FR: While attempting to make a move around the outside, Bearman pushes Maloney off the track, resulting in a safety car as Calapinto is also involved in a separate incident. Just as the safety car is about to start, Leclerc overtakes Sullivan for the lead of the race – an illegal move.

On lap 6, Leclerc manages to overtake Sullivan (legally) for the lead. Saucy and Stanek make contact with Stanek having to retire due to a puncture. Sullivan and Bearman have a drag race to the checkered flag, with Bearman pushing Sullivan slightly wide after Bearman hits the kerb. Sullivan manages to hold off and takes P2.

Qualifying: Rookie Hadjar continued to stamp his mark as he stormed his way to pole with a stonking lap, five tenths ahead of championship leader Martins.

SR: Correa takes the lead off Collett during lap 1, just before the safety car is deployed. Correa suffers a gearbox issue on lap 6 after leading comfortably and is forced to retire. Stanek and Bearman battle it out for P6, Bearman pushes Stanek onto the kerb which allows Leclerc to insert his way past Stanek.

Leclerc, Bearman, and Maloney are involved in a three-wide battle. Maloney is pushed by Bearman and is spun around as Leclerc makes his way past. Crawford takes the lead on lap 14.

FR: Treacherous rain conditions caused the race to be delayed slightly. The two Charouz teammates collide twice with the second time being more dire as one of them retires. Campos driver Marti runs into the back of Sullivan causing the latter to spin. Crawford and Jonny Edgar are spun around with Edgar having been hit from the back by Collet and Edgar hitting the side of Crawford. Hadjar picks up his first Feature win of the season.

Qualifying: Traffic chaos as several drivers fail to cross the line to complete their final lap. FREC driver Oliver Goethe replaced Hunter Yearny who was recovering from an injury and gets reverse-pole.

SR: Another wet race that causes the race to have a rolling start as opposed to a standing start. Goethe struggles to keep his car on track as he recovers just in time for the race to begin. Colapinto takes the lead almost immediately. Vidales crashes out and causes a safety car on the opening lap. Colapinto makes a mistake that allows Collet to take the lead of the race. Leclerc and Crawford make contact after Leclerc tried an ambitious overtaking move that sends both to the back of the field.

FR: Oliver Goethe retires after spinning. Hadjar pits for slicks with four laps to go, unfortunately, the gamble doesn’t pay off as he finishes P18.

With only three rounds, and 6 races left. There are still a lot of points to play for. Any one of the top five can still be the 2022 champion. While three-time consecutive team championships Prema Racing look set to make it four in a row as they stand over a hundred points ahead of second.

Three Things to Watch For:

READ NEXT: “F1nally” back? The chequered past of Porsche in Formula 1