Brad Sweet’s name has been popping up a lot, recently. After all, that’s bound to happen.

When the No. 49 is in victory lane two races in a row and crosses the line in the top five for the ninth straight World of Outlaws Sprint Car Series event, he’s going to be a big talking point.

The impressive stretch has given the team the tour’s points lead as it heads into the final weekend of June, besting 10-time champion Donny Schatz and the Tony Stewart Racing No. 15 entry by 54 points.

Sweet knows what it’s like to hang with the best of the series week after week. He’s finished second in the points standings in each of the past two seasons to Schatz.

This season, though, especially in the past nine races, Sweet’s team has taken some big steps.

The run started off at Lawrenceburg at the end of May.

Sweet was coming off of an 18th place finish at Charlotte, his second in the then-current, four-race stretch.

That’s when something clicked for the 49 team, and he used the stretch to come into Knoxville Raceway as both defending series champion and also the tour’s points leader.

“It doesn’t change the way that we [race],” Sweet said. “I think we want to come here and contend for wins just like any other time.”

Since saying that, Sweet became the winningest driver in the series this season by earning two wins in the past three races.

He’s built his points lead up to 54 points.

“The points are just a lot different on the [World of Outlaws] tour,” Sweet said. “In 10 races, someone could shift 200 points, so it’s something you don’t really pay attention to until the summer months. Obviously, you want to be in contention, but you really just want to be focused on winning races and running up front each night. [After that] the points will take care of itself.”

Regardless of the way Sweet and his team approach it, he’s in a favorable spot to claim the points championship as we make the turn to the back half of the season.

If the Grass Valley, CA native won the title, it would be the first time someone other than Schatz earned the accomplishment in five years.

The last time someone knocked off Schatz? It was again a Kasey Kahne Racing entry, when Daryn Pittman did it in 2013.

“It only gets harder through the summer,” Sweet said. “There’s a lot of money on the line this year. We just need to stay focused, do our jobs, focus on our race car, and hopefully we’ll be good.”

Those summer months that Sweet is referring to are right around the corner, too.

Following this weekend’s racing in Minnesota, the Outlaws will participate in a handful of one-off events. Then things heat up.

The series heads further east to take part in a stretch with multiple events that pay over twice the regular $10,000 to win on finale night, including a five-night stretch in Ohio that ends with the Kings Royal.

No matter the event for Sweet, he’ll approach it the same way as he does every night on the tour, and we know he’s got what it takes to win the big ones.

As previously mentioned, the series heads to Jackson Motorplex this weekend for the three-day Jackson Nationals in Minnesota. The winner of the main event on Saturday night will take home $41,000. 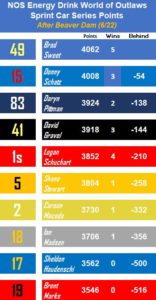