That’s what the month of May has brought as far as regular season races go for Hendrick Motorsports’ Alex Bowman. It’s the best three-race stretch of Bowman’s career, which still has yet to see a Monster Energy NASCAR Cup Series (MENCS) victory.

It eerily echoes his HMS teammate Chase Elliot’s career – he finished P2 eight times before earning his first win at Watkins Glen in 2018. After getting the monkey off of his back, Elliott went on to win twice more in the final third of the season, winning three out of the last 15 races overall.

It was inevitable that a win was coming for Elliott and even though Bowman doesn’t have as bright of a spotlight on himself, it seems like his first P1 is right around the corner.

Before his 10-race stint at HMS a year ahead of replacing Dale Earnhardt Jr. in the 88, Bowman’s two best finishes were P13 and P16 at plate tracks driving for lesser teams. The pair were his only two top 20’s in the Cup Series.

Bowman’s showed this season, however, that he’s a quick learner. 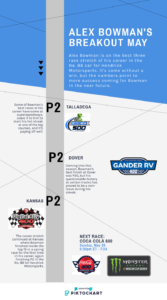 Even though he didn’t earn a top 10 until Talladega, he used a strong finish on a plate track as a starting point to a hot streak that allowed him to improve on tracks he hadn’t been successful at in the past.

Before this season, his best finish at Dover was P20. He never finished in the top 15 in a Kansas spring race coming into this season either.

This stretch has simply been a breakout for the Tucson, Arizona native.

He even improved on his All-Star Race finish from a DNF in his first season to a P8 finish after winning the Fan Vote last Saturday at Charlotte.

“We have momentum from the past three races on our side and I know the guys back at the shop have been working endless hours on these cars,” Bowman said in a weekly release. “Hopefully we unload pretty decent on Thursday and can get a good starting spot that night for Sunday’s race.”

That’s not the only success he’s seen at NASCAR’s ‘home track,’ either. He crossed the line P4 in the roval race last year on top of a ninth-place finish in the 600. He’s no stranger to success there.

The race is forecasted to see record high temperatures on Sunday, which will provide a unique challenge to teams. However, if the No. 88 team can keep up the success and momentum this Sunday, it won’t be much of a surprise to see them partying on Memorial Day.