The Formula 1 circus arrives at the Hockenheim circuit in Baden-Württemberg state in Germany for Round 11 of the 2018 season. The German Grand Prix became part of the F1 world championship from 1951. The race returns to this historic circuit after last being held in 2016.

Hockenheim hosted its inaugural race in 1970 and it was won by the late Jochen Rindt. The popular German raced under the Austrian flag and was killed in an accident five weeks later at the Italian GP after his popular win here. The GP returned to the Nurburgring until Niki Lauda’s accident there in 1976. Safety concerns about that circuit led to Hockenheim hosting the German GP from 1977 to 2008 (except for 1985 and 2007). From 2008, the race has alternated between Hockenheim and Nurburgring.

Ferrari has won the German GP a record 21 times, followed by Williams and McLaren with nine and eight wins respectively. The last two races held at this circuit have been won by Mercedes (2014, 2016).

Michael Schumacher has won the German GP four times with all his wins coming at this circuit. Fernando Alonso (2005, 2010 and 2012) is a three-time winner at Hockenheim. Lewis Hamilton (2016, 2008) has won twice at Hockenheimring, with another German GP win at Nurburgring in 2011. Sebastian Vettel won his first home Grand Prix at Nurburgring in 2014. The two Germans on the grid – Vettel and Nico Hulkenberg will be on a mission to perform well in front of their home crowd.

The 4.574 km Hockenheimring with 17 corners (slow and medium-speed corners) and four fast straights is one of the faster tracks on the F1 calendar. The circuit demands a medium downforce setup and the drivers will be on full throttle for 65% of the lap.

The fast and long straights will stress the engines and high fuel consumption will make fuel management a big challenge. As the track is only used every alternate year, at the start the surface is very slippery and the grip improves as the track has rubber laid on it, as the weekend progresses.

Sector 1 (Turn 1 to Turn 4) starts with a high-speed right-hander (T1) which leads to a series of slow corners. The sector ends at Turn 4 which leads into the longest straight of the circuit.

Sector 2 (Turn 5 to Turn 11) starts with a long Parabolika straight which is a 1-km long straight ending with a heavy braking hairpin.

Sector 3 (Turn 12 to Turn 17) enters the stadium section which takes the cars into the start-finish straight.

The starters from the front row of the grid have won all but one race from 2002. The track offers good overtaking opportunities.

Pirelli tyre choices for this race are the white-striped medium tyres, the yellow-striped soft tyres, and the purple-striped ultrasoft tyres. Pirelli last used this tyre combination at the Chinese GP. The red-striped supersoft tyres has been skipped and the softer ultrasoft tyres used instead.

The drivers have chosen seven or more sets of the ultrasoft tyres of the thirteen sets allocated to them. The race is likely to be a one-stop race with the durability of the tyres. The differential in lap times the tyres offer will lead to a mix of interesting tyre strategies. 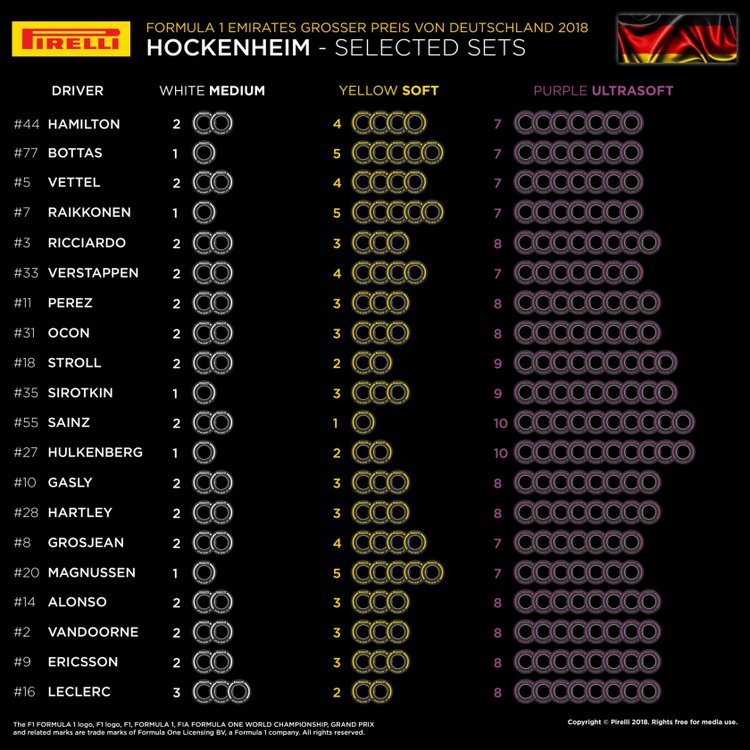 Ferrari (287 pts) has taken the lead in the constructors’ championship by 20 points from arch-rival Mercedes (267 pts). Red Bull Racing (199 pts) is in a strong third position.

Renault (70 pts) leads the midfield teams in fourth position. Haas F1 (51 pts) is in fifth position. Force India (49 pts) has edged past McLaren (48 pts) and are now in sixth and seventh positions respectively.

Ferrari has established itself as the frontrunner in the constructors’ title race with its performance in the triple-header leading upto this race. The win by the Maranello-based team at the last race in Silverstone, a stronghold of Mercedes, has helped the team strike a decisive psychological blow against rival Mercedes.

The midfield battle is as tight as ever with the teams from fifth to seventh positions separated by three points. Renault leads the pack but will be under pressure from Haas F1 and a fast-improving Force India team.

Vettel (171 pts) leads the title race by 8 points from Hamilton (163 pts). The reigning world champion is under serious pressure from Vettel. After a disastrous first lap incident, Hamilton had to author a comeback drive to secure second place at the British GP.

To concede victory to arch-rival Vettel on his home turf at Silverstone was a serious setback for Hamilton. After the race, a war of words broke out between the two teams. The Briton and Mercedes have to regain the initiative in the title race.

Kimi Raikkonen (116 pts) is in third position with strong podium finishes in the last three races. Daniel Ricciardo (106 pts) is in fourth position now. Valtteri Bottas (104 pts) is now fifth and rounds out the top 5 positions in the drivers’ championship.

Hamilton is the defending champion at the German GP. Mercedes has won the last two races held here. The Silver Arrows is under serious pressure for the first time in the hybrid-engine era. Hamilton and the team need a win here to stop the march of arch-rival Ferrari. Vettel will be looking to score a decisive win at his home race and extend his lead. A battle royale is in prospect between the main contenders in Germany this weekend.