The champagne will be flowing for Shane van Gisbergen, as he (again) wraps up both days races at the Adelaide 500. It duplicated exactly how he succeeded in 2017, winning both races from Pole Position, and reigning supreme on the streets of South Australia.

The ‘groundhog day’ moment for race fans, was unexpected, as the new architecture of the ZB Holden is a brand new race car. In an amazing team effort, Red Bull Holden Australia have made phenomenal improvements to not only be race-ready, but to lead the field in all results.

Shane van Gisbergen and his teammate and 2018 Supercars champion Jamie Whincup, had made the front row after blitzing the Top10 Shootout. The Sunday results mirrored the same placings for him on Saturday, where van Gisbergen was dominant in his race win.

The perfect start for @shanevg97. #VASC

After claiming his 26th race win, in front of a record crowd in Adelaide, the rewards will be immediate. The number 97 car and it’s team of engineers will celebrate tonight, before breaking down the gear and beginning to drilldown on the data. The ZB Holden is a brand new machine, and for all teams who have invested in the latest Holden chassis and equipment, they can begin the season knowing that the ‘hatchback’ design can be successful.

Rolling out a new car, not every driver had success. Jamie Whincup especially was unlucky. He crashed his car during practice, which almost ruined his Saturday. Gladly for him, he was able to finish the first race. But when in the lead on Sunday, Whincup’s transmission failed [the first DNF for the seven-time champion, in over 136 successive races].

But a 1-2-3 finish for the Holden brand is perfect for every teams and all zb drivers confidence.

While all the cards fell perfectly for Shane van Gisbergen, his biggest rival did not enjoy a perfect day. Falcon driver Scott McLaughlin was unable to put his Shell V-Power car up near the podium, after a loose bolt on the circuit cut his right front tyre.

Front right dramas for McLaughlin, he heads back to the pit lane.#VASC pic.twitter.com/G8mbpZZpr3

Whilst not singlehandedly responsible for his race finish, it compounded a less than perfect start to 2018. McLaughlin is known as one of the fastest drivers, and proved that in qualifying. But when it came to the Top 10 shootout, he was bested by Team 888 on both days. And the battle between the two manufacturers; DJR Team Penske Racing and the Red Bull Holden Australia race team, will be the one to watch all year.

Rounding out the podium finish on Sunday, was David Reynolds of Erebus Motorsport. He put his Penrite Oil car onto the second row of the grid, doing much right over the race, with his only fault was not to cover Shane van Gisbergen, when emerging back onto the track with cold tyres.

“I didn’t expect to be that fast, but yeah killing myself for not covering. But ‘that guy’ (van Gisbergen) is pretty good at this track,” was Reynolds response, straight after the race.

And to complete the ZB Holden top three, Garth Tander brought his Wilson Security Gary Rogers Motorsport home in a close third place. Bouncing back from an 11th on Saturday, Tander was unable to compete with the leading cars, after his tyres went off late in the race. But his consistency may see the veteran mount a challenge over the season.

Owning the street circuit, van Gisbergen was extremely happy to claim yet another ‘clean sweep’. He told FoxSports that “that was just awesome. Such a shame for Jamie, we went the wrong way with set-up and had to battle out there. David was really quick, and I expected him to battle back, but awesome.

Humble, but also showing a rare ability to win from the front. In 2017, a wide variety of drivers had success over the early stages, but if Shane van Gisbergen can take his form onto the Melbourne Grand Prix circuit, he could open up a large gap back to his rivals.

Next stop on the 2018 Virgin Australia V8 Supercars series is Races Three and Four, at the Melbourne Grand Prix circuit.

Now a full round of the championship (unlike in previous years) it will be interesting to see if the Ford’s can reply to the early pace shown by the Holden’s. 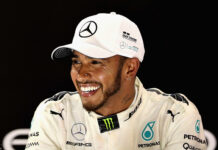 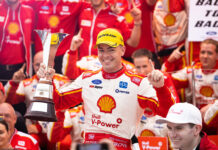 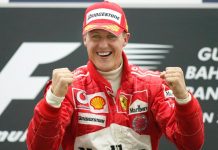