Kalen King is headed to Penn State. The four-star cornerback out of Detroit, Michigan had 32 offers and chose the Nittany Lions. King will be joined by his brother, inside linebacker Kobe King. King is a three-star prospect out of Cass Technical. The linebacker had 27 total offers. The twin brothers decided to continue playing together at the next level. It will be interesting to watch both grow into their roles in the years to come.

King is ranked as the eighth-best prospect out of Michigan according to the 247Sports Composite. Further, 247Sports Composite has him ranked as the 16th best cornerback in the 2021 class. In contrast, Rivals has King ranked as the sixth-best prospect out of Michigan. In addition, as the 10th ranked corner in the 2021 class. King committed to the Nittany Lions on April 10th and had offers from 10 other Big Ten schools. Included in that list were both Michigan and Michigan State. Cass Technical is 40 minutes from the University of Michigan in Ann Arbor and a little over an hour from Michigan State in East Lansing.

The four-star cornerback is five-foot-eleven-inches and 170 pounds. He has a 34.40-inch verticle taken at the Opening Regional in March 2019. So that very well could have gotten even better over time. He also recorded a 3.95 shuttle at the Opening Regional as well. His ability for quick directional change is important at the corner position. King will join a young secondary for the Nittany Lions. This will give him plenty of chances to grow into a strong player. 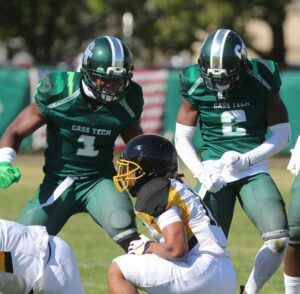