Hello everyone and welcome back to the third and final part in the University of Kentucky History Series. Today the focus is on the uniforms and more specifically How Kentucky’s Colors Became Blue and White. Along with the colors we will also take a look at how the helmets and uniforms have changed throughout the years.

If you missed the first two installments you can catch up below. The first was the history of “On, On U of K” the school’s fight song.

The second part focused on how the Wildcat became Kentucky’s mascot.

The history of Kentucky football traces back to 1881 when the then Kentucky State College played its first game against Kentucky University. That school is now known as Transylvania University. The program was dormant for ten years before its revival in 1891.

Before a game with Centre College on December 19th Kentucky students decided the colors were to be light yellow and blue. The shade of blue had yet to be decided when a student asked a simple question, “what color blue?” Varsity letterman Richard C. Stoll took off his necktie, which happened to be royal blue for all to see. As a result that shade became Kentucky Wildcat Blue. One year later the yellow color was dropped because it clashed with the blue and white and the school’s colors became official.

In 1916 Kentucky’s named its first official football stadium after Stoll. It was one of the first to showcase concrete bleachers. The Wildcats played at Stoll Field until moving into Commonwealth Stadium in 1973. Today the field is still used for the marching band and intramural activities.

What Color Is Kentucky Blue?

On paper defining and describing shades of colors seems like a weird concept. However a company based out of Carlstadt, New Jersey does just that. In developing the Pantone Matching System http://www.pantone.com they created a guide for over 2,000 different shades.

The royal blue associated with Kentucky is actually a slightly tweaked version of Pantone 286. In fact there is a 46 page booklet issued by the university detailing how the colors and logo should look down to the most minute detail.

Kentucky has changed their look several times over the last few years in both the logo and  colors. Like many schools Kentucky has created “alternate” uniforms to boost merchandise sales. The color grey has now become a third color in many Cats uniforms.  In addition to grey the school has added black to their game day wear.

In the two pictures you can see the difference in the classic Kentucky look and an example of the uniforms the team wears now.

Probably the most memorable example of an alternate uniform came from the Kentucky basketball team. In 1996 Converse and the university unleashed denim uniforms the Cats wore as they claimed their sixth national championship. 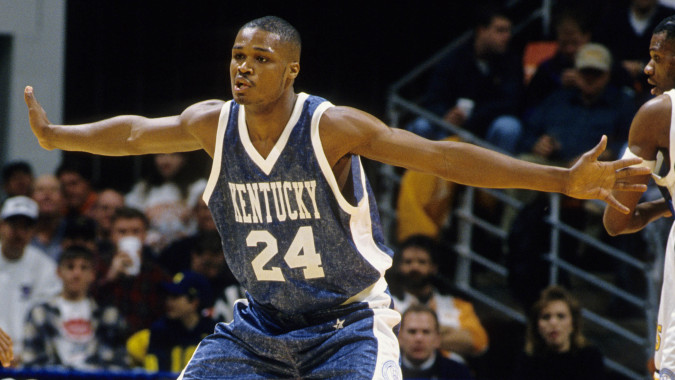 For the 2014 football season, the Cats unveiled chrome uniforms featuring a combination of all four colors. While the younger crowd showed great excitement over the new look, many older fans wished the school kept only the blue and white. However the combination won the award for best uniform from UniformSwag.

In addition to the uniforms the logo on the helmet also changed. For years the Kentucky helmet featured a simple “K” on both sides. In 1997 the school changed to the UK on both sides and in 2014 added the chrome helmet to go with the uniforms. Below is a cool look at the Wildcats helmets through the last 30 years.

Thanks for checking out this look at How Kentucky’s Colors Became Blue and White here at Last World of College Football. It is always fun to go back through history and see how things have changed over the years.

Hard as it is to believe we are less than seven weeks until college football season starts. Look for position previews in the upcoming weeks on the 2017 Kentucky Wildcats leading up to the September 2nd opener against Southern Mississippi.