Andy Murray exited Wimbledon at the earliest stage of his career on Wednesday. He did so after losing to the #20 seed John Isner for the first time in his career, a previous 8-0 record. However, that record bore no resemblance to the match that played out on Centre Court as the American dominated the match and ran out a deserved victor. The question is: how did this happen and what can Murray do to improve at this stage of his career?

No Breaks, No Glory

The main issue for Murray was that he was unable to break the Isner serve. This may seem obvious, and this is of course the whole point of John Isner, but it wasn’t as much of a problem for Murray earlier in his career. Indeed, Murray had broken the Isner serve in every other occasion that they played between 2010 and 2016.

In reality, Murray rarely came close to a break of serve. Isner took control of almost all of his service games early and didn’t lose his focus; the American managed 73% first serves in, which will always make a big difference. This was also their first meeting on grass, which is probably the most difficult surface to return on. However, there is clearly something amiss in the Murray return game since his return to the tour, something that was also picked up by tennis betting journalist Andy Schooler:

He's now failed to break in six of 31 this year.

Once one of the very best returners, that's a massive difference in Murray's game post-hip surgery.#Wimbledon

What Has Changed & Can Murray Bring It Back? 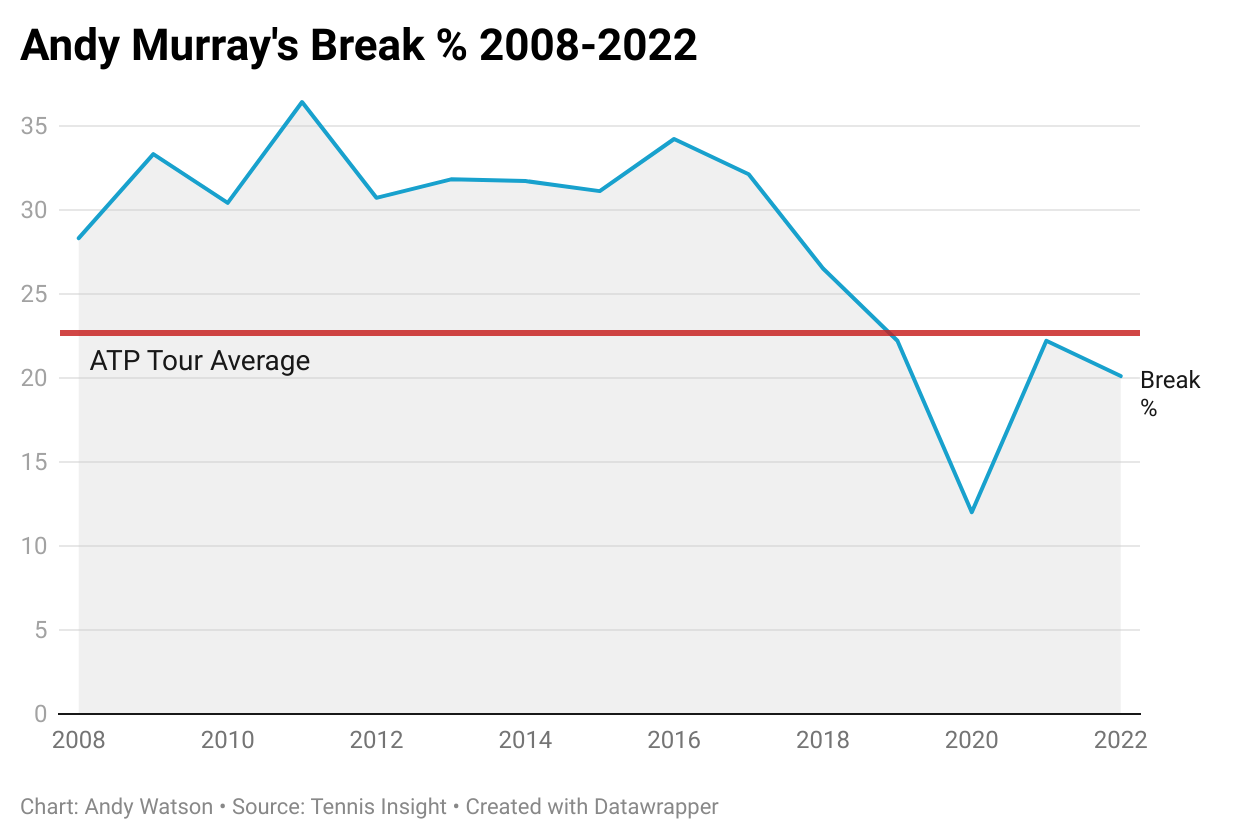 The data is fairly clear to see. The sample size of Murray matches is obviously much lower post 2017 injury and subsequent surgeries, but when he has been able to play Murray simply hasn’t been able to consistently get above average in breaking his opponents. His 2008-2017 figures on return are absolutely elite, matched only by the very best in the game (and Diego Schwartzman).

If Murray is losing 10-15% of games through return, there’s no way that he can make that up via serve as his serve numbers have always been 80-85% holds. The concern must be about how Murray can get back to somewhere near those previous years, or at least above average, on return.

At his age and physical condition, this is going to be difficult. I don’t know exactly what the differences will be but I suspect a tiny change in reaction time, speed, and some imperceptible differences are making it difficult for Murray, none of which can simply return. However, I would also attribute a couple of percentage points to the fact that Murray has played very little clay court tennis over the last few years, which is usually slower and produces more breaks. 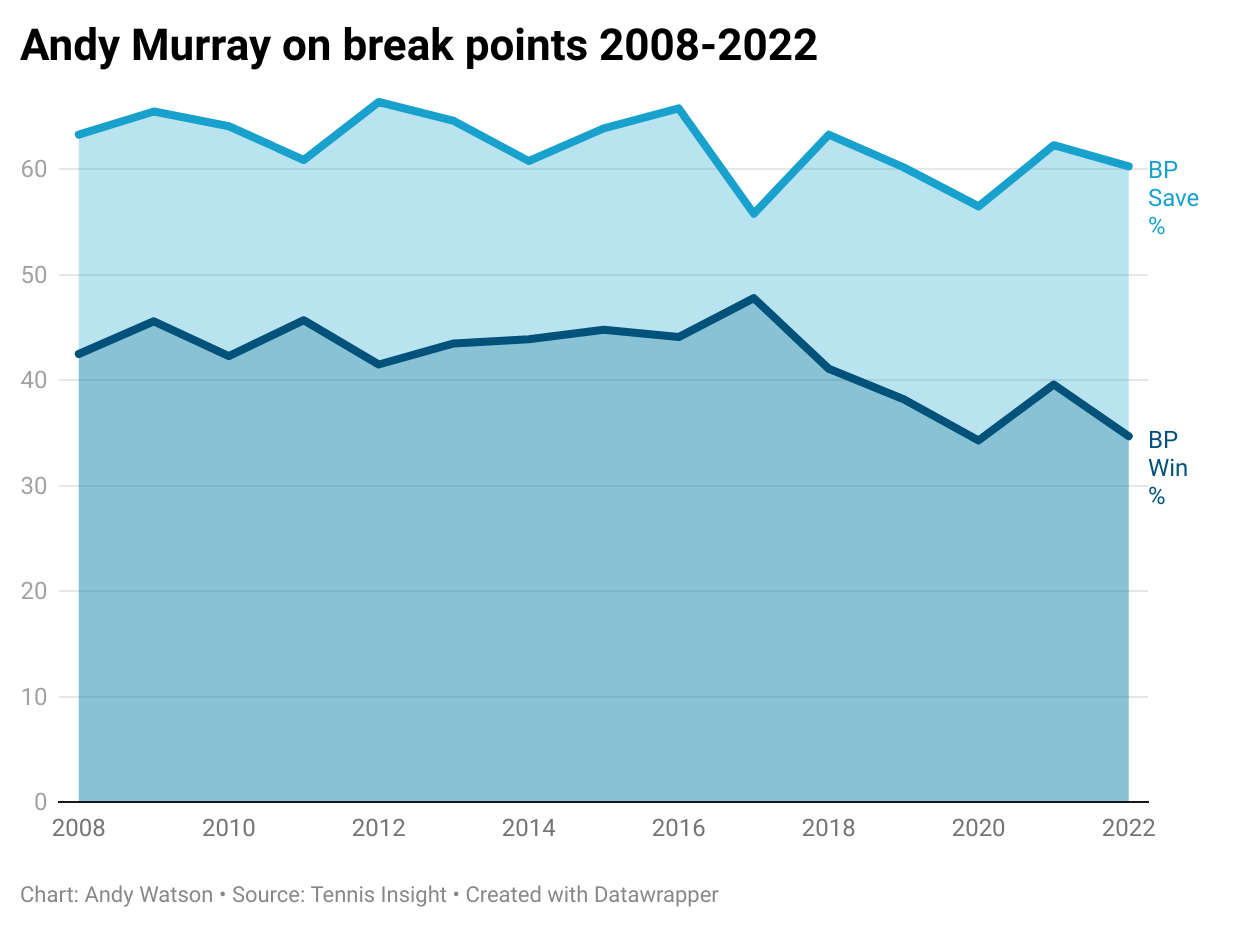 A similar pattern follows when observing Murray’s data over time on break points. When serving, his break point save % is pretty constant around 60% and recent injuries haven’t really affected that side of his game.

However, we see a similar downturn in results from 2017 onwards in taking break points. From being consistently over 40% conversion throughout his whole career, Murray is now finding himself more usually down in the the mid-to-high 30s. Again, this is difficult to attribute to just one thing but is certainly something that Murray needs to address if he is able to. I suspect that some of this is mental, on both sides of the net. Murray has lost his status as a “Big 4: member and that might go some way to explaining it.

Will Murray Improve From This Point?

I still think that there has been progress since Murray rejoined Ivan Lendl. The match against Isner at Wimbledon was a bit of a one-off, Isner played exceptionally well and is an anomaly at the best of times. The North American hard-court swing was traditionally a swing in which Murray performed well and racked up the ranking points.

Now that he is back inside the world’s Top 50 he is well placed to make some decent runs at tournaments and perhaps get himself seeded for the US Open. I don’t think he’ll ever return to the very top, but Andy Murray has more than earned the right to do whatever he wants and play for as long as he wants.