It’s been a rough nine years for tennis games. From having the likes of the Virtua Tennis 4, Grand Slam Tennis 2 and the fantastic Top Spin 4, all released between 2011 and 2012, it’s been a barren wasteland for any tennis game let alone a good one since. In early 2018 Big Ant Studios attempted to fix that with AO Tennis, their first tennis game. But whilst it had some appeal, it wasn’t quite an ace.

Two years later, the Australian studio are back at it again with AO Tennis 2, a sequel which builds on everything fans liked about the first game, whilst also bringing a lot more to the table. The big question is, do these improvements finally make a great tennis game, that is worth your time and money and give you something to bridge the gap whilst the tennis season is suspended? 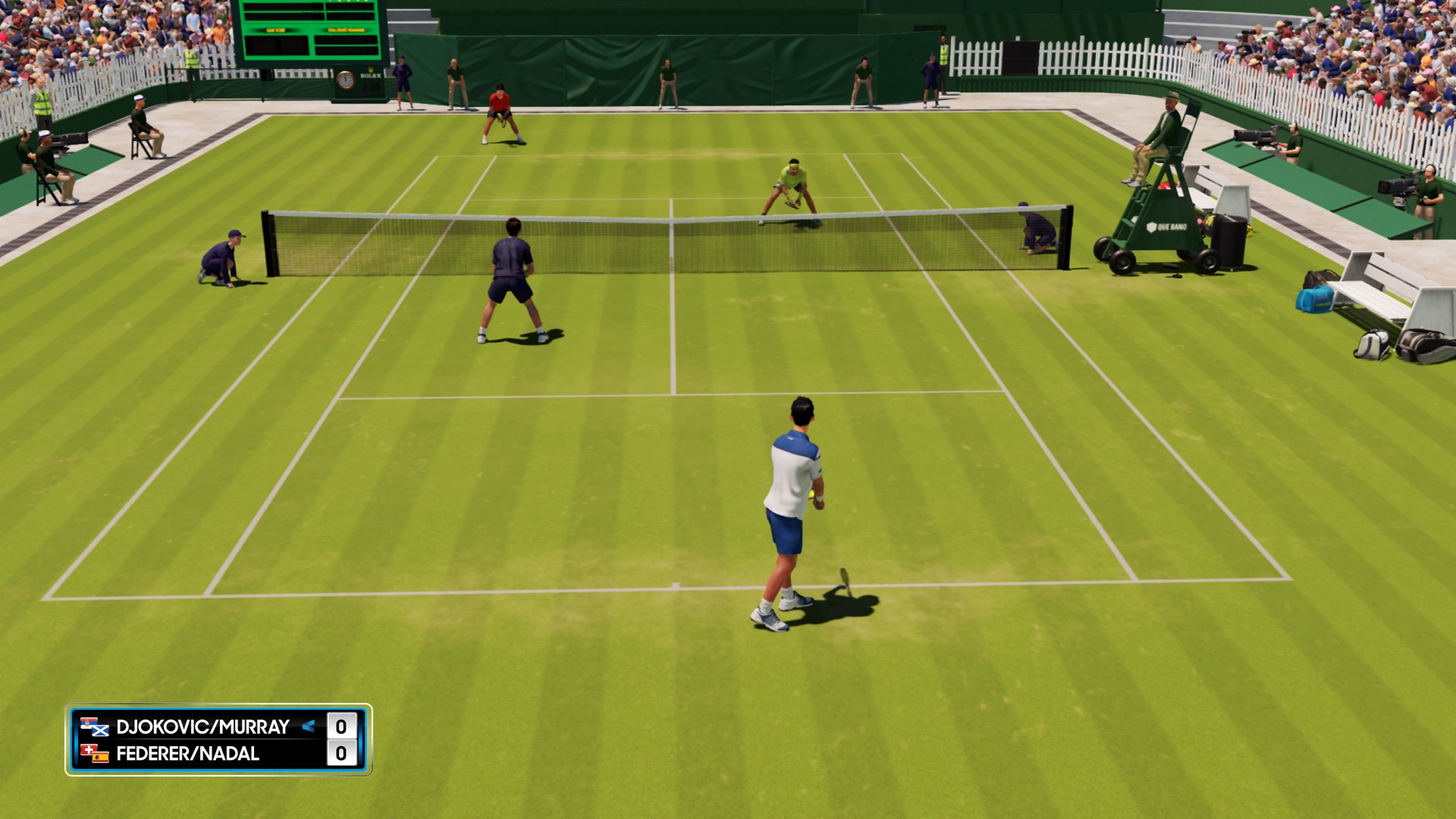 The dream match unfortunately ruined by doubles being an afterthought.

Let’s start with my favourite part of AO Tennis 2 and that’s the gameplay. Simply striking a great mix of realism and fun with what it offers, at a simple level the game is basic and on the lower AI difficulties that’s all you’ll need to get some enjoyment. If that’s not enough for you then rank up the difficulty and the game becomes a different beast. Knowing when to go for your shots, what shots to go for and where to place shots all become massive factors. Time or aim incorrectly (you’ll be doing this a lot at first) and you’ll find yourself with awful winner to unforced error ratios and losing more often than not.

Even after spending a lot of time with the game I find myself jumping back in attempting different playstyles with a variety of players with the depth on offer depending on which player you choose, such as attacking tennis with huge server Kevin Anderson or defensive tennis with top ten player David Goffin. The whole risk and reward aspect of the game not only makes it challenging but something that draws you back in knowing there’s always room to try something new and improve.

It’s not all sunshine though and there are some issues which hold the gameplay back from being great. The serve is extremely overpowered, if you learn how to serve well with many players you’ll often find yourself hitting an unrealistic amount of aces and having matches where breaks are like finding gold dust, a far bigger issue online than anywhere else. Come into net on a good shot and the likelihood is you’ll win the point given how hard passing shots are to make as well as how good most volleys turn out to be. Thankfully, if Big Ant Studios listen to the fans these should be areas that are fixed with an update rather than having to wait for a sequel. 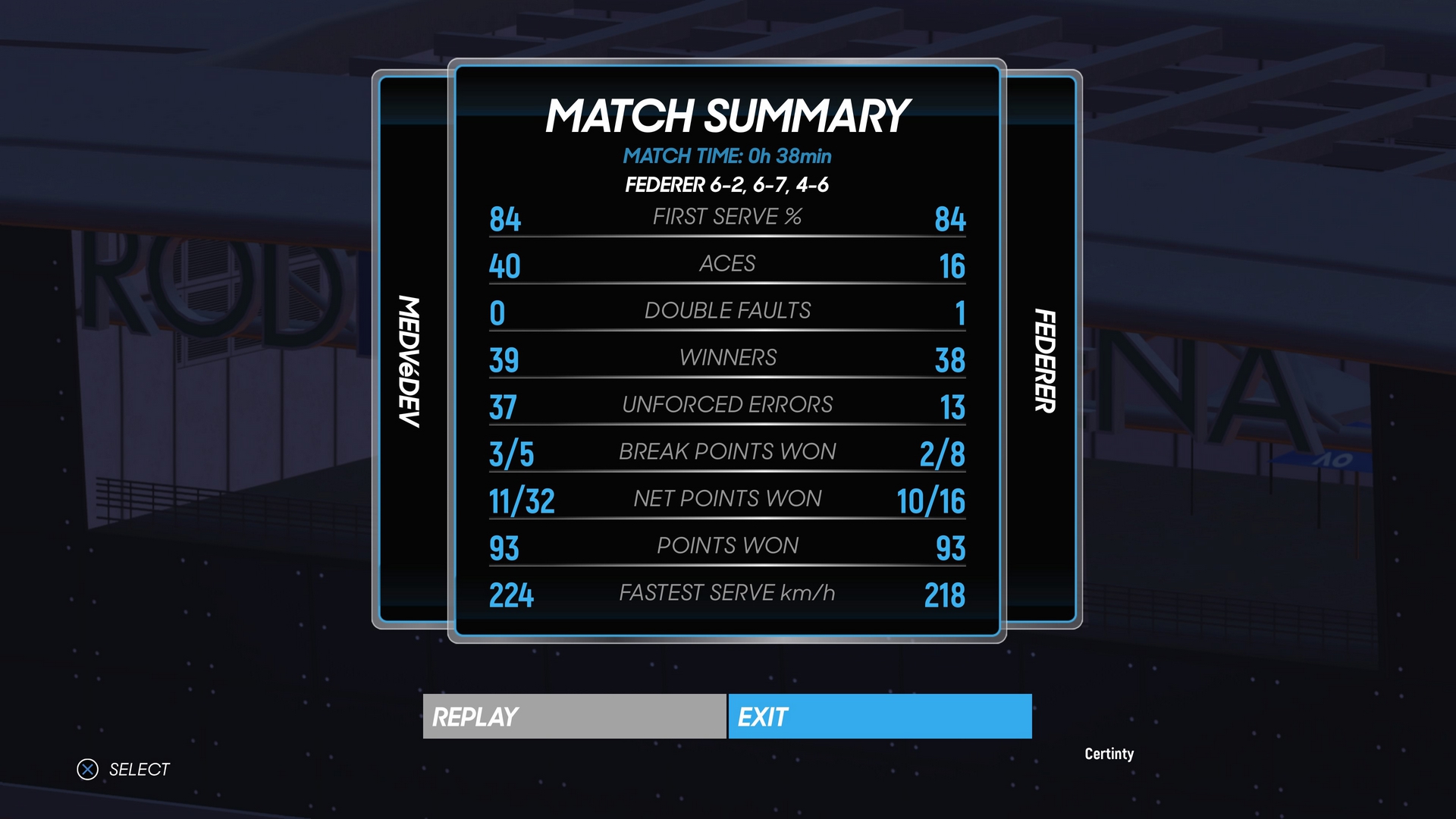 When the serve is this overpowered it’s often not very fun.

The career mode gives the option of making your own player or choosing a professional to with which is great for people like me wanting to live the journey with my favourite player Novak Djokovic with no interest in making my own at all. There’s nothing to shout about here but a few nice implementations of form and fatigue to increase/decrease a player’s ability depending on their previous matches and tournaments adds a nice variable to keep matches interesting. Press conferences are also around in which you’ll be asked questions with a selection of replies but are ultimately pointless and more confusing result wise to add anything relevant to the career mode. Overall it’s a pretty basic implementation of a career mode but it does all it needs to do.

The official licenced player list the game comes doesn’t blow anyone anyone away. Besides world number two Rafael Nadal and world number one Australian Ash Barty, the game severely lacks big stars to attract the interest of casual tennis fans. To make matters even worse a lot of the player models are poor and not what you would expect of a 2020 game.

On the bright side you can easily download community made players and while the player models do look off (and often worse than the bad licenced player models), just having access to all the top players in the world including the likes of eight time Australian Open winner Novak Djokovic, 20 time Grand Slam winner Roger Federer and former world number one Andy Murray is something refreshing as those are the players most will end up using. I especially love how even though these players are downloaded, umpires and introductions will say their name out like in real life, a nice touch to feel like these players are not just “player 1” and “player 2” like previous tennis games. 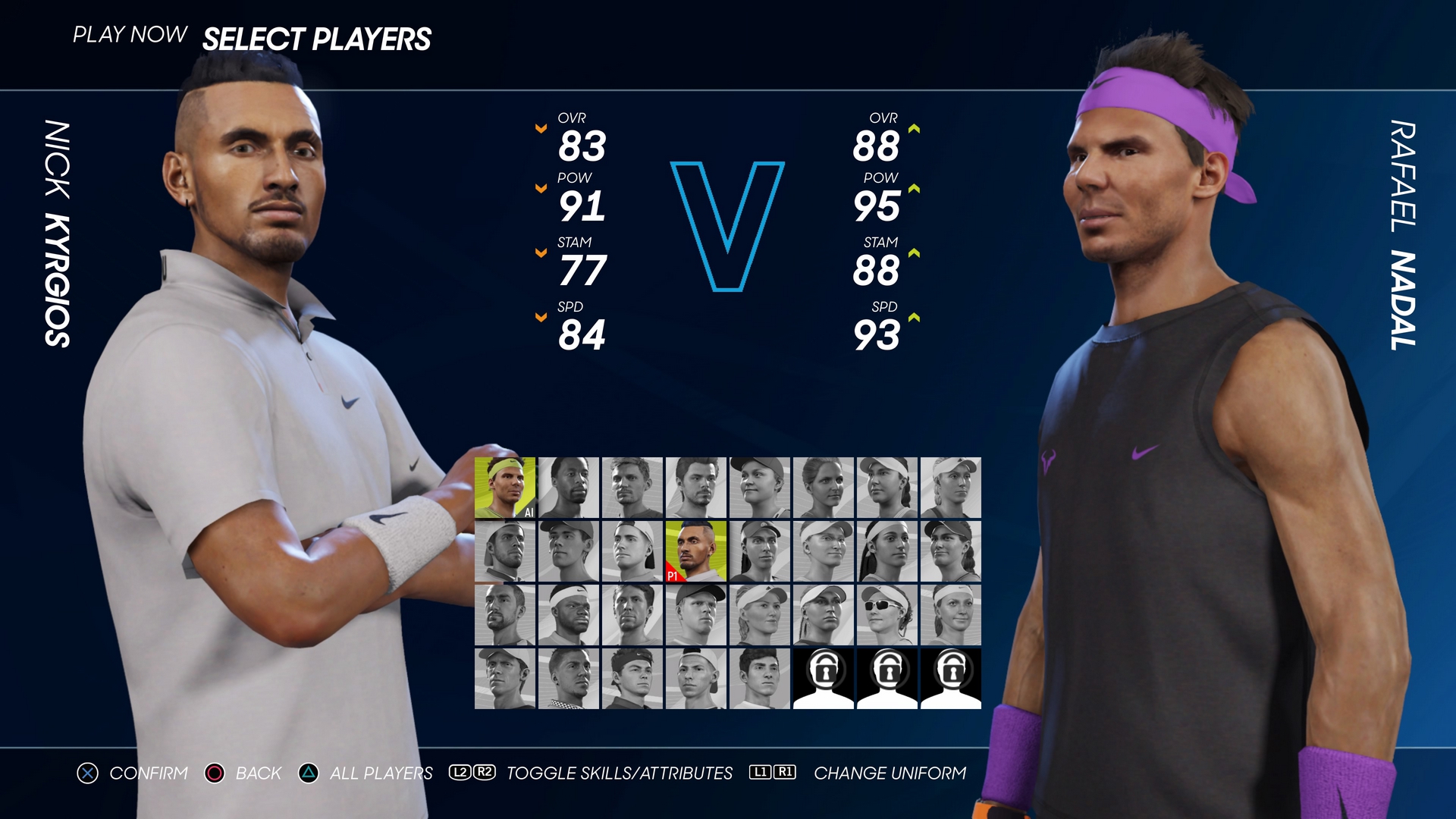 The highs and lows of the player models summed up in one picture.

The game also offers the ability to make and download different venues which is desperately needed given the lack of official courts in the game. It’s nice to have custom made venues for the other Grand Slams and all the Masters events but at the end of the day it’s never accurate enough to feel like they’re the courts at that event. The colours may be accurate but the court designs are always quite a way off due to restrictions when designing your own stadiums. Even visually, while the Australian Open courts are one of the best better parts about the game, the same cannot be said about the others. Moving forward the franchise severely needs more licences, especially in events. The Australian Open licence is great but why not the other slams too? If anything, the ATP and WTA licences should be priority given how many events and stadiums would come with those.

In the first few hours of the game you’ll love seeing the players react to winning big points and hitting poor shots, it ranges from extravagant celebrations from Nadal to Australian bad boy Kyrgios throwing his racquet and complaining to the umpire about a bad call. After that the novelty wears think and you’ll be more fed up of seeing the same reactions to a point where you would just wish there was far more variety or even that you didn’t have to see them anymore.

Which brings me onto the animations of players when they’re actually playing. What shocked me is how accurate some strokes actually look. Nadal has his trademark loopy forehand which looks great while Monfils has his Andy Roddick type service motion just with less knee bend. Even with downloaded players you have Andy Murray with an accurate service motion and Richard Gasquet with a backhand which looks close enough to stunning shot it is in real life.

There’s so much good going on here but unfortunately the game throws most of it away with bad animations elsewhere. At times animations of strokes will totally go out the window in favour of generic unrealistic strokes, especially on the backhand side. You can easily be going from a great tennis point to essentially a ping pong like one in the matter of seconds depending on the strokes.

AO Tennis 2 just like in real tennis offers up a challenge system to debate calls you disagree with. While it sounds cool, the feature is lacking, almost every call is always correct which makes challenging more or less a gimmick. It’s just one of those things which tennis games should do without given every call should be fully accurate anyway. One thing I found funny was that even on clay you’re able to challenge calls, something which hasn’t yet been introduced in big events on both the men’s and women’s tour.

Speaking of clay, there’s also grass to go alongside the hardcourts of the Australian Open. Clay plays slower and is higher bouncing, but it still lacks the amount of sliding and movement we witness on TV, you can tell Big Ant Studios simply tweaked a few things here and there to differ it from the hardcourt gameplay. It’s clear the surfaces are more distinct in this than the original game but clay and grass still have a lot of work needed in the future to give each one a true and unique feel. 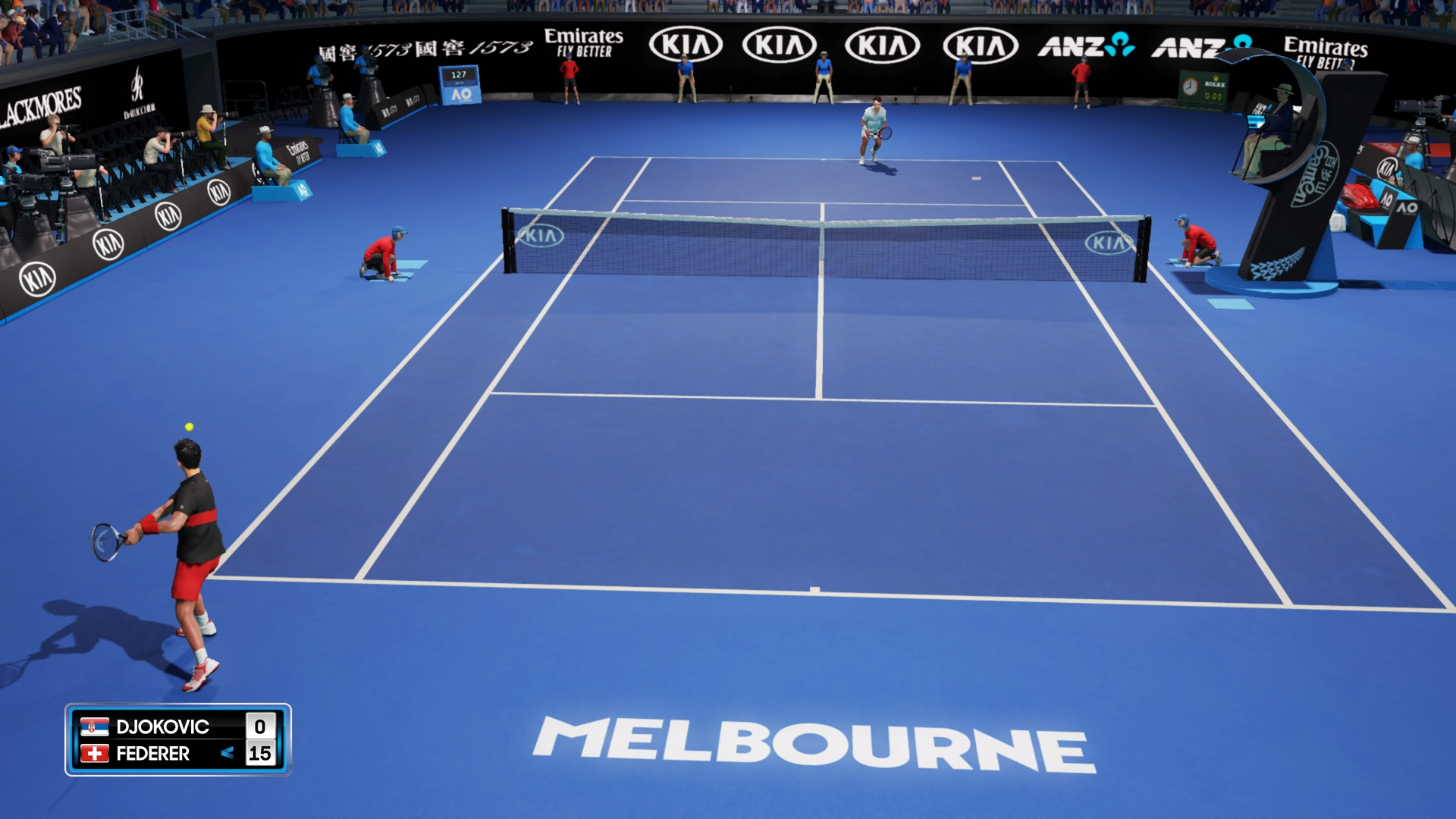 To conclude, there’s massive room for improvement for Big Ant Studios’ latest tennis game. Licences, gameplay balancing, animations and differences in court surfaces are just some to name, but despite all that the core gameplay is still so strong it somehow holds the rest together.

That’s why overall I would have to say that AO Tennis 2 is without a doubt the best console tennis game since 2011’s Top Spin 4. Plus, we look at the improvement made from the original game to this one there’s no reason to think Big Ant Studios won’t keep improving the franchise massively for future instalments. The future of tennis games might just be a promising up and coming youngster who’s broken the top 20 after all.