With Finals Weekend upon us, our resident tennis historian, Martin Keady, looks back at the five finest Australian Open Women’s Singles Finals.

Few, if any, Grand Slam finals have had a prize comparable to what is on offer for the winner of this weekend’s Australian Open Women’s Singles Final. Not only will the winner of the Simona Halep-Caroline Wozniaki contest claim their first ever Major victory (with both women having already lost two Grand Slam Finals each), but they will also be the World No.1, with either Halep consolidating her position at the top of the pile or Wozniaki seizing it from her.

Nevertheless, despite the enormous prize at stake, this weekend’s final will have to go some to match any of the great finals on this list. Here, then, are the Five Finest Australian Open Women’s Singles Finals.

Before she lost to Simona Halep in their epic semi-final this week, Angelique Kerber must have thought that she was on course to win the Australian Open for a second time, having made such an impressive start to 2018 (which was all the more impressive given how awful her 2017 had been). Nevertheless, even if she had made the final again, and won it, she would have been hard-pressed to equal the sheer joy of winning her maiden Major in 2016, when she beat the mighty Serena Williams in three sets.

The 2016 Australian Open Final was Kerber’s first ever Grand Slam Final and she took the women’s game by storm simply by making it, as she had only ever reached one Major quarterfinal before then, at the French Open in 2012. Having reached the final, however, Kerber was absolutely determined to make the most of it, surprising red-hot favourite Serena by taking the first set 6-4. What followed was even more astonishing as Kerber survived the inevitable backlash by Serena that comfortably won the American the second set, 6-3. She continued to trade powerful groundstrokes with Williams deep into the third set, which she eventually won 6-4. In winning the title, Kerber showcased to the world not only her unique “Crouching Tiger, Slamming Forehand” style, whereby she almost gets down on her haunches to generate maximum power in her shots, but also her easy, unaffected charm as she thanked Serena profusely in her tearful winner’s speech.
Embed from Getty Images

The surprise run by Elise Mertens to this year’s semi-final, where she was eventually rather comfortably beaten by Caroline Wozniaki (notwithstanding Wozniaki’s difficulties in closing out the match), evoked memories of the two brilliant Belgian women who had duked it out for the game’s greatest prizes, including the Australian Open, in the first decade of the 21st century. They were, of course, Justine Henin and Kim Clijsters, and they met three times in Grand Slam Finals, with Henin winning them all. However, the undoubted pick of those three Major meetings was the 2004 Australian Open final, when Clijsters came the closest she ever came to topping her compatriot in the last match of a Slam.

Henin was the World No.1 when the two women faced off in the Melbourne Final and she had had the better of their meetings up to that point, as Clijsters struggled to convert her undoubted talent into the solid gold of Major success. Indeed, it is intriguing that Clijsters only fully emerged from Henin’s shadow after Henin’s star had finally waned, with Clijsters winning three of her four Majors after Henin had begun what proved to be a series of retirements from the game.

In the 2004 Australian Open Final, Clijsters was definitely cowed by Henin’s game, especially her brilliant one-handed backhand which, until Stan Wawrinka started winning Majors, was generally considered to be the best in tennis. Henin won the first set and went 4-0 up in the second, before Clijsters, as if realising that she had nothing left to lose, started hitting out and incredibly turned the match on its head, reeling off six games in a row to take the second set 6-4. However, just as it appeared that Clijsters was finally ready to best her fellow Belgian in a Major Final, Henin showed all the mental steel that went with her extraordinary technical ability and broke Clijsters to go 5-3 up. She duly served out for the match, the Championship and the unofficial title of “Tennis Queen of Belgium”.
Embed from Getty Images

Jennifer Capriati had actually begun her remarkable late-career renaissance (she was only in her mid-20s when it happened, but given that she had made her professional debut before the age of 14 that was still late in her career) the year before, when she had beaten the first truly great Swiss tennis player, Martina Hingis, to claim her first Major. However, the following year’s final easily topped the 2001 edition, as Capriati came back seemingly from the dead to win the match and in the process effectively end Hingis’s career as a top-class singles player.

The 2002 Final was, incredibly, Hingis’s sixth successive Australian Open Final. She had won the first three, between 1997 and 1999, when she was on the seemingly unstoppable roll that took her to five Grand Slam titles before the age of 21. However, that was before the two factors emerged that would eventually thwart what appeared to be her inevitable development into one of the greatest women’s champions ever: first, the arrival of the Williams sisters (as had been demonstrated at the 1999 US Open, she could sometimes beat one of them but rarely both at the same tournament); and the onslaught of injuries, particularly to her ankles, that eventually slowed her down and robbed her of her mobility, arguably the single best part of her game.

In the 2002 Australian Open Final, Hingis initially appeared to be back to her best, as she won the first set 6-4 and then, like Justine Henin two years later, swept imperiously into a 4-0 lead in the second set. However, Capriati fought back magnificently to take the set to a tie-break. She eventually won a tight, to-and-fro tie-break 9-7 before virtually blitzing Hingis in the third set, breaking her serve several times and eventually winning it 6-2.

Afterwards, Capriati said proudly that it was “one of the greatest matches I have played. Not just for the actual tennis, but for everything I had to cope with out there.” Although at the time neither woman would have thought it possible, it proved to be the last Major Singles Final for both of them, but it was a truly memorable way for them to bow out at the top of the women’s game.
Embed from Getty Images

Great rivalries are ultimately what make great sport and one of the greatest sporting rivalries ever, not just in tennis but in all of sport, was that of Martina Navratilova and Chris Evert. Although for a long period in the early to mid-1980s it appeared that Navratilova had pulled away from Evert, as she won a succession of Grand Slam Finals between them, in the end they effectively finished level, with both women winning 18 Majors in total.

The 1981 Australian Open Final was one of the best, if not the best, of the truly remarkable 14 Major Finals that they contested (Navratilova winning 10 to Evert’s four). Up to that point, for all their domination of the other Majors neither woman had won the Australian title. Consequently, when they faced each other in Melbourne, at a time when the Australian Open was the last Major of the year and not the first (it was only in 1987 that the Australian Open’s scheduling at the start of the calendar year was firmly established after numerous changes throughout the tournament’s history), there was a genuine sense of anticipation as to which woman would claim an Australian title first.

That was despite the fact that in 1981 the Australian Open was still being played on grass, which was undoubtedly Navratilova’s favourite surface, whereas Evert was always the stronger of the two on clay. However, whereas Evert often struggled at Wimbledon against Navratilova (losing four finals to her ), she positively thrived on the green stuff in Melbourne, taking the first set on a tie-break. Navratilova customarily fought back in the second, winning it 6-4, and it appeared inevitable that she would sweep past Evert in the third and deciding set. But on this occasion, Evert was not to be swept away and she produced one of her finest grass-court performances, taking the match deep into the third set before eventually succumbing 7-5. 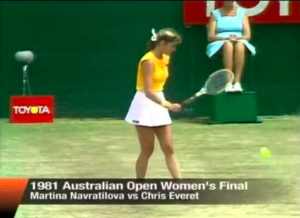 Arguably the greatest ever women’s singles final in Melbourne (and certainly the greatest of the Open era) was that between Margaret Court and Evonne Goolagong in 1971, which was even more of a classic match-up than that of Evert and Navratilova 10 years later. In so many ways, the two women were absolute opposites. Court had been a great champion for more than a decade, having already won the Australian title an astonishing nine times, whereas Goolagong had only broken through as a Major winner earlier that year, winning both the French and Wimbledon titles. And of course, Court was regarded as the embodiment of “old” Australia, in that she was white, relatively patrician and very Anglicised (her maiden name was that most classically English surname, Smith), while Goolagong was only 20 and Aboriginal. In fact, she was the first Aboriginal or Native Australian to achieve world fame and in the process she drew global attention to the horrendous plight of so many of her people.

In the first set, Goolagong stunned Court and the watching world by breaking Court, one of the finest servers in the women’s game, on two occasions, before closing out the set 6-2. Entirely predictably, Court rallied and took the second set to a tie-break, in which she simply smashed her much younger compatriot off court, winning it 7-0. But the third set saw the best of both women, before Court got the decisive break and eventually won it 7-5. It was a bitter loss for Goolagong and she would go on to lose the next two finals (to Britain’s Virginia Wade in 1972 and to Court again in 1973, both times going down in straight sets) before she finally won her first Australian title in 1974 by beating a young Chris Evert in the final.

Goolagong went on to win a total of four Australian titles, including a hat-trick between 1974 and 1976, and when one considers that between 1960 and 1976 Court and Goolagong won 15 of the 18 Australian Championships or Opens on offer (there were actually two Australian Opens in 1976, in what is the oddest in all the odd scheduling of the tournament), it truly puts into historical context the scale of their 1971 shootout. Court won, but eventually Goolagong would come to the fore, and in the other great court that all great sports people appear upon – that of public opinion – Goolagong would ultimately easily beat Court. Whereas Court and her fundamentalist Christian beliefs are now openly questioned, to the point that there is serious talk of renaming the “Margaret Court Arena” in protest at them, Goolagong is a universally adored figure, symbolic not only of Aboriginals but of all Native Peoples around the world.