EDITORIAL – The 2021 MLS Secondary Transfer Window opens tomorrow. The Primary Transfer Window ran from March 10 – June 1. The secondary transfer window will be open from July 7 – August 5. With an injury to Younes Namli and Sam Vines likely to be busy with national team duty throughout the rest of the year, what will this Colorado Rapids secondary transfer window look like? Let’s take a look.

Firstly, the Rapids did not have a busy winter in terms of the number of players leaving or joining the club. The only key change to the first team was the addition of Michael Barrios, who’s been great at right wing.

Head Coach Robin Fraser’s been consistent in saying that he’s liked the team as constructed since his arrival in August 2019. The club hasn’t had a busy transfer window (more than 10 players in and out combined) since he took over.

However, when they have made moves, they’ve been eventful. They’ve been significant. Moves to acquire Barrios this winter, Austin Trusty before 2020, and trading Kei Kamara last season all made statements and stirred up conversation amongst supporters and pundits. The next month could be very similar.

“We’re very pleased with where the roster is right now. We’ve been active in trade discussions, seeing what’s possible. We’re looking in the global market and what COVID has done from a value standpoint. We’ll only execute a trade when we feel it can make the team better,” Padraig Smith told Last Word on Soccer. “We’re in a very strong position, but we’re always on the lookout.”

One of the themes of the conversation was that the club probably wasn’t going to make lots of trades or signings. But if a move was made, it would have a significant and positive impact on the team.

Outside back, forward, and central midfield could be the three positions of focus of this Rapids secondary transfer window. They’ve got numbers at center back and winger. William Yarbrough’s been impressive in goal. I don’t see them making a significant move at positions of strength, unless a European club is willing to pay $5 million for Trusty or Vines with a 25% sell on clause, or something like that.

Colorado is probably going to look in house for a temporary replacement for Vines due to the Gold Cup and potentially World Cup Qualifiers in the fall.

Steven Beitashour was not listed as injured in the roster notes for Sunday’s game against Seattle. Jeremy Kelly’s just been recalled from Phoenix Rising and was on the bench. Sebastian Anderson has played 90 minutes in all but one game for the Switchbacks so far this season. Beitashour could finally make his Rapids debut. Keegan Rosenberry could move from right to left back. Anderson’s played on his off wing in the past in both MLS and the USL. Briain Galvan also played wing back off the bench recently in the 5-3-2. Please don’t throw things just because I brought up the 5-3-2. 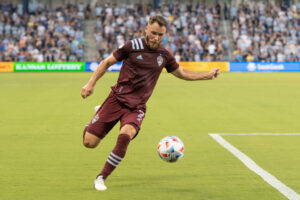 The point is: there’s options. None of them is better than Vines. But given how the loanies have done in the USL, they’re viable. Either way, Rosenberry will have to step up in being the more attacking fullback or in playing out of position.

However if the Rapids want to look at bringing someone in, Mikey Ambrose hasn’t been playing much for Atlanta this season. He’d be easy to get for a few $100k in allocation money, maybe a draft pick, etc. He’s a good veteran option who could come in, do a job, play 300 minutes, and get moved easily in the winter.

John Tolkin has been impressive for RBNY so far in his third professional season. He is 18-years-old, so the sample size is small and raw. If New York’s selling a player within the league, they’re going to want value in exchange. But if Smith’s looking for a long-term option if Vines is leaving in January, he’s the best young option domestically.

Barrios and Diego Rubio are tied for the most goals on the season, with three. The Rapids are tied for 8th in the Goals For in MLS, which is good. For all the complaints from Rapids Twitter about how Rubio doesn’t score, Fraser sees value in other things he does. Andre Shinyashiki recorded seven goals and three assists when he won Rookie of the Year in 2019. He has five goals and one assist since, with just the one goal this year. His role has also changed this year to where scoring isn’t his main responsibility.

Could the Rapids use a reliable striker with a better reputation for finishing than Rubio and Shinyashiki? Yes. How much will that player cost to acquire? Probably more than the Rapids payed to sign Rubio, Shinyashiki, or Jonathan Lewis. Is the club then likely to sign a striker this window? Nope. 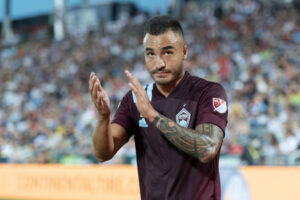 That said, if they were to pursue someone, Holding The High Line looked at Jesús Ferreira earlier this year. Ricardo Pepi has Walley Pipped him with four goals in his last four games. A young promising player who is having trouble getting minutes comes to the Rapids for a reasonable transfer fee and turns things around. That sounds familiar. He’s shown to be good in the air for 5’8″, which would add something to Fraser’s toolkit that Rubio and Shinyashiki aren’t elite at. The question is what FC Dallas would want in exchange. For a forward with one goal and three assists in his last 1000 minutes, he won’t be cheap. If it helps the Rapids get a home playoff game, it’d be worth it, right?

In terms of veteran options, Toronto FC should be looking to shake things up now that Chris Armas has been fired. Hiring a coach who can get a tune out of Jozy Altidore will be key, meaning they might be willing to sell Dom Dwyer at a discount. He’ll be 31-years-old in a few weeks and hasn’t had a healthy year since 2018. He’s similar to Rubio and thus would fit the system. He’s crafty, aggressive, and chippy. When the team around him focuses on getting him the ball in the box, he scores regularly. Trading for him would be a calculated risk.

This is where things get interesting. With Namli rehabbing after ankle surgery until September, another No. 8 or No. 10 option could be valuable, albeit expensive. Kellyn Acosta’a national team involvement will make them extra thin in the middle of the pitch. I doubt Cole Bassett is leaving the club this summer, so don’t expect a whole sale change to the midfield. If any Rapids player is getting sold this summer, it’s Vines but that’s unlikely according to several club sources I’ve spoken to.

Bassett is going to need to step up offensively when Acosta is gone. Nicolas Mezquida’s proven he can do a job when given a defined and somewhat limited role. Oli Larraz has gotten some substitution minutes. Like the situation at left back without Vines, Fraser has options. None of them are as good as Jack Price, Acosta and an in form Bassett/healthy Namli, but in certain situations, they can work.

“We always have our eyes out for opportunities (to add players). I do feel strongly that within the group, we can make due. We have a lot of good players who are working hard. We have players who offer us a lot of choices,” Fraser said on June 17 when asked about potentially signing a player this summer with Namli out. 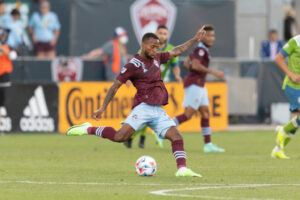 Replace Namli’s specific talent in the midfield, distribution to open up the attack and breaking the press, will be difficult. These are two highly sought after abilities. It’s hard to find young and talented players in MLS who can do these things well that aren’t getting much playing time. Surprise, players who can create counter attacks from the center circle with two opponents chasing after them start games and cost money. If the Rapids want another Namli within the budget, they’ll have to look abroad.

The Rapids could however recreate him in the aggregate Money Ball style. Find a utility midfielder who is willing and able to do a bit of everything and adjust the roles of those around him. That’s similar to what Fraser’s done with Acosta the last few years. Have the other No. 8 step up in a few ways, make Price baby sit the new guy, and tell the backline no mistakes in possession.

Do that and there’s domestic targets to pursue. Looking at the Goals Added interactive tables from American Soccer Analysis, I focused on dribbling and passing (crudely, the traits weakened in Namli’s absence). I then looked for players who’ve started in the past but aren’t playing as much this season, who have been utility midfielders.

The results: Jacori Hayes, Samuel Piette, and Jordy Delem. None of them are as good as Namli or Acosta. They’re all about average in passing and dribbling. They can all play box-to-box or as a holding midfielder. Namli’s loan is up at the end of this season with an option to buy, so Smith and Fraser don’t need a long term solution. They need someone for the next 2-3 months and they can make a long term decision on Namli, the midfield, and whoever they sign this window later.

If the move helps improve the team despite the player’s pedigree being underwhelming, the Colorado Rapids secondary transfer window will be eventful. Just like the Barrios trade.