Seattle, Washington — It’s a game that many thought might get moved. With fires ravaging the West Coast, the Seattle Sounders FC and Los Angeles FC banded together pre-game to support firefighters and first responders. However, when the whistle blew, the two sides became sworn enemies once again.

In the first half, it was a fairly even match until teams met up inside the box. Seattle obtained two penalty kick calls in the span of five minutes. On the first call, defender Dejan Jakovic was called for a handball while defending a set piece play. Jakovic lifted his arms in the air while guarding Raul Ruidiaz, giving referee Joseph Dickerson a clear call.

Nicolas Lodeiro stepped up to take the penalty, and comfortably slotted it past LAFC goalkeeper Pablo Sisniega.

Then, a few short minutes later, Seattle earned another penalty. This time, while on the attack, defender Yeimar Gomez Andrade drew the foul as Latif Blessing clipped him in the back.

Once again, Lodeiro stepped up to the mark. However, on his second attempt, Sisniega was able to get his fingertips on it, but the shot deflected back into LAFC’s goal. Seattle took a 2-0 victory and finished the first half by keeping LAFC scoreless.

Seattle — who recently brought back defender Brad Smith as a reinforcement on defense — held LAFC to a clean sheet. Stefan Frei was threatened early in the match, but once Seattle got on the board, Frei didn’t have much to deal with in goal.

Seattle kept pushing for more goals. The team has shown its scoring capabilities, with the most recent example being a 7-1 victory over the San Jose Earthquakes.

The final goal of the night was scored by Raul Ruidiaz, who has eight goals in 11 matches.

Our thoughts are with the victims of the West Coast wildfires.#LAFC x @SoundersFC pic.twitter.com/3aRUKUSiIn

What’s next for the Sounders and LAFC?

LAFC is in unfamiliar territory. In the club’s short two seasons in MLS, success has been bountiful. This year, it’s a bit of a rollercoaster year for LAFC in terms of results. In the last five matches, LAFC has lost three, including this result against the Sounders.

LAFC will look to bounce back against the Vancouver Whitecaps on Wednesday for a mid-week match.

Meanwhile, the Seattle Sounders will take on their Cascadia rival, the Portland Timbers, on Wednesday night as well. In their last meeting, the Sounders dropped the contest, 1-2.

Below is the updated Western Conference standings in MLS. 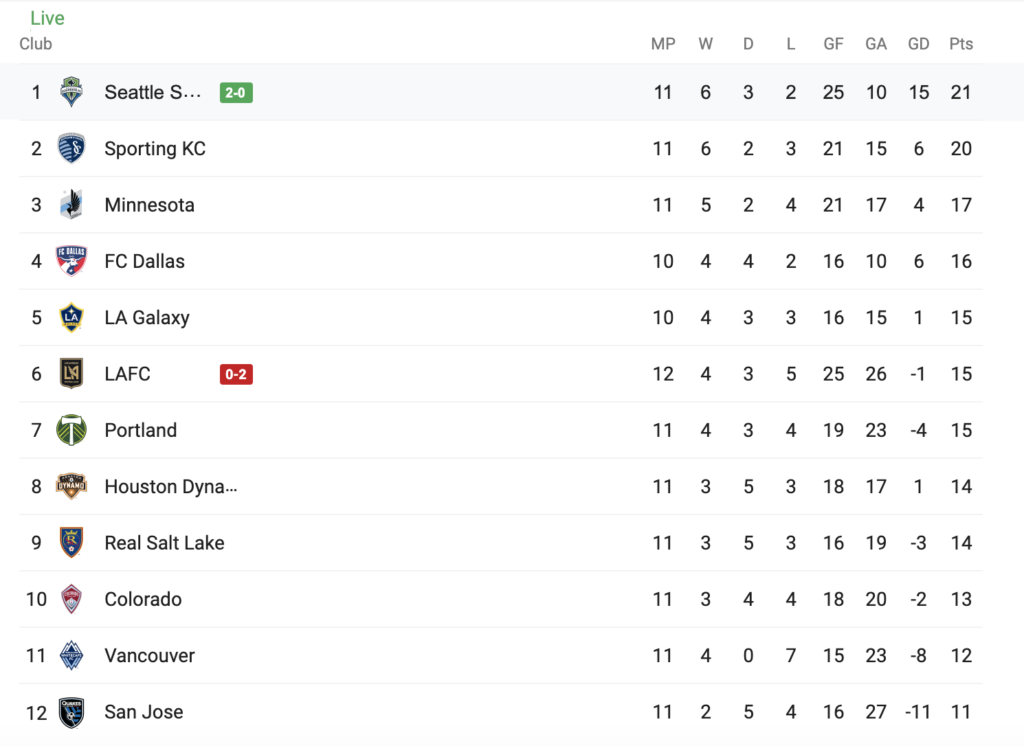